One last set of storylines before Zero Hour slams into both Legion series (and Valor) at the time in the early ‘90s! Tom and Mary Bierbaum ONE LAST TIME AT DC write for all but the last two comics here, but astonishingly we are served by six different artists for six different issues! 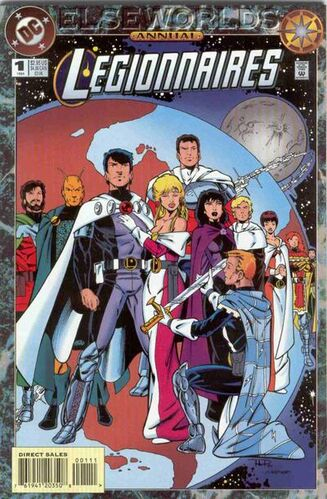 LEGIONNAIRES (1993-) #12 Legionnaires 12 The mystery of the missing Legionnaires deepens as more team members are zapped by the strange powers of Kid Psycho. Tom and Mary Bierbaum, writers Pencils: Adam Hughes

LEGIONNAIRES (1993-) #13 Legionnaires 13 Invisible Kid gets a taste of what his teammates suffered at Kid Psycho’s hands. Tom and Mary Bierbaum, writers

LEGIONNAIRES (1993-) #14 Legionnaires 14 The team’s deadly encounter with the Archduke takes a turn for the worse, and the captured Legionnaires discover still more about Kid Psycho’s bizarre powers. Tom and Mary Bierbaum, writers

LEGIONNAIRES (1993-) #15 Legionnaires 15 The Legionnaires learn some new things about themselves and one other as they “mind walk” through another dimension. Tom and Mary Bierbaum, writers

LEGIONNAIRES (1993-) #16 Legionnaires 16 The subject is time. Cosmic Boy, Saturn Girl and Live Wire are traveling through it. Brainiac 5 and Invisible Kid penetrate some mysteries about it, and some surprising characters pop out of it! Mark Waid, Writer

LEGIONNAIRES ANNUAL (1994-) #1 Legionnaires Annual #1 “THE MOON ALSO RISES.” They call their living, breathing environment the Host. They are the male supremacist society of the Gess, who occupy the Host’s epicenter, known as Bedlam. They are embroiled in a very deadly war between the sexes on a WORLD WITHOUT END. Mark Waid (writer) Paul Pelletier (art)

Questions to discuss: Wiki Style, add at least one please if you like, we’ll all try to answer:

Next week: Back to the double-barreled, shake you down for all your comic book allowance spending money, Legion series era of mid-‘80s pre Crisis DC!!!

Tom and Mary Bierbaum actually met through a Legion fan amateur press group Interlac in the late 1970s. They would write articles and stories for Interlac together, and Keith Giffen took note, and offered them work. They came up with the dialogue for the controversial “5 Years Later” storyline we’ll dig into someday then the plot and dialogue after that for the Legion series, until Legionnaires started up. But after the issues for this week’s reading, they are gone gone gone from DC (as of 1994).

Here’s a curious side-tangential thought for you on a bitter cold night in much of the US of A- how did late 70s comic fandom small groups communicate in the days prior to the internet?

Believe it or not, they would have “mailing lists” and simple 3 or 4 colored page stapled “booklets” going out monthly like magazines still do for some would be the way they communicated articles etc as a group. People would occasionally get on the phone, but back then “long distance” was really expensive for more than a few minutes talk time.

Last Bierbaum thought for now:I had no idea they live in Erie, PA. My wife and I have a favorite book store / comic book store out there we stop by when we are on our travels every couple of years, so who knew?

This is very cool. I stop in Erie often traveling from Cleveland to Buffalo and beyond.

The four issues of Tom and Mary were a good story, but I thought the changes in artist was distracting. I do like that their is a general art style and that they actually look like younger people as opposed to adults. Issue 16 had a great set up for Zero Hour.

I thought there could have been more for the Elseworlds storyline. I was totally expecting Mordu to pull a Kulan Garth… that he had used the Miracle Machine to make this universe. I suppose they made him more benevolent but that doesn’t explain why their was such fear of Mordu. It also, like many Elseworlds stories jumps right into it, but the big bad of the Circle was not clearly defined. Were they a take off of Dominators? Some other group?

I tried to think of another question to add.

I was thinking about what other “Romances” lasted multiple reboots like Irma and Garth. Even Lois and Clark or Diana and Steve were ripped apart in reboots. Is Irma and Garth’s romance that destined? I don’t know the origin of it but it ranks up with other DC romances if it has survived this long. Or has it just lasted because the Legion has always been a smaller corner of the DC universe?

I added a version of your excellent question above @Meisaj . We have also been noticing at least one or two of the classic romantic pairings in the animated series monthly watchalong fun.

The privately-owned bookstore / comic book store in Erie, PA that we always stop at when we drive through (so I think two separate trips in the past 3 years, stopping by both ways usually) is Books Galore. The large front room is all about comics and graphic novels, with the upstairs 5 rooms being all about books but also old “comic” magazines like Creepy or Marvel Strange Adventures. 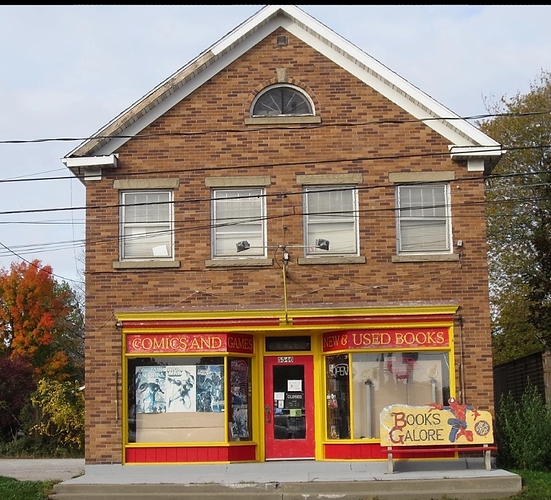 Someday maybe I’ll drive through on the last Saturday of the month, when they unlock the “dollar” comics room for just that one day. 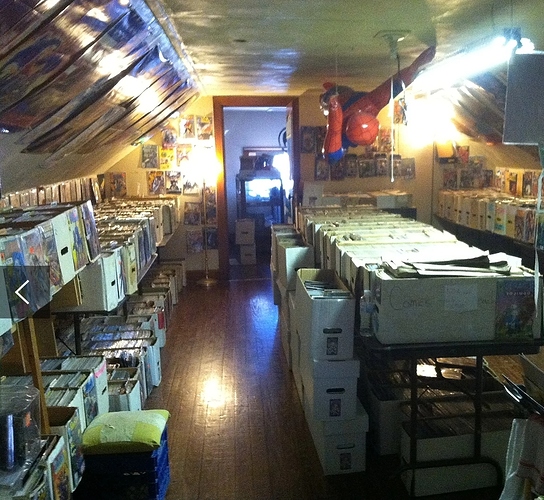 Their “WIX” website has a nice virtual photo tour of the place- it’s kinda jammed with books.

One of the “Big B” comics stores up in Canada, in particular the one in Hamilton, Ontario at the end of Lake Ontario (an hour’s drive from Niagara Falls), has a basement full of comics on sale for a dollar each.

I can see why you make it a destination in your pass througjs.

Read these quick, before Zero Hour takes them all away to o b l I v I o n!!

Did the constant changing of artists take away at all for you the illusion of the Legionnaire’s fictional world’s believability, or do you prefer to have the artist change every issue?

I think they were either similar enough or there was enough consistency in the inking that they mostly felt comparable to the usual style. I will say that outside of the Adam Hughes covers and the first few pages he did, I felt the art here was kind of “eh” if not outright bad at times, especially #15/16, which felt like some of the really bland, Image wannabe styles that was going on at the time.

Best stories: the writing team of Tom and Mary Bierbaum the first 4 issues or what Mark Waid does on the last two issues here?

I think I’ll go with Tom and Mary. While they kind of felt pedestrian or standard superhero adventures, I do think they told a more interesting, consistent storyline. Waid’s final issue leading into Zero Hour had some potentially interesting hooks for the event, but it doesn’t really work on it’s own.

As for the Elseworld story…it was odd. I feel like this falls into the trap a lot of Elseworld stories fall into, where either the spin they take with the characters isn’t all that different that it couldn’t be a regular story, or it’s so out of character that it just doesn’t feel like the characters we know and love. I don’t think they ever really explained just exactly how this world came about, why for example Irma and Garth’s relationship was worthy of death, or even exactly what Avalon is.

What do you think of the recurring romantic love between Irma and Garth over the decades, reboots etc? What other Legion pairings work best and should endure in future versions, in your opinion?

Well, in terms of the Legionnaires book here, it’s a little disappointing because this technically this isn’t a new reboot take on these characters, but clones of the original with some of their memories. When I first heard this concept, I was hoping that they would use that concept to shake things up and make different takes on the characters, since they are different people with different experiences.

As for other couples that I think work/endure, Dawnstar and Wildfire come to mind, as well as Bouncing Boy, and Shrinking Violet and Light(ning) Lass.

It’s really too bad this is “goodbye” to Tom and Mary. It’s a neat real-life story how they went from fandom to the actual writing of nationally-published comics, kind of like @HubCityQuestion 's ascension here, and probably one other character who chooses to remain mysterious about it.

I can’t wait for next month to see how we all react to the “clone” idea being tossed out after only 16 issues or so and being replaced by the usual habdashery of a “crisis” mixing of realities event.

All this happens around the same time as Amalgam Comics, where DC and Marvel characters were basically mixed in a blender, but we’ll discuss all that stuff next month. (Doctor Strangefate etc is kinda the same idea of what will happen to our favorite iconic characters in the 90s afer Zero Hour…well, I guess we’ll have to wait and see if that’s accurate.,.)

Welp, time to wrap this one up and post the new reading later tonight!

Wow it really seemed like Tom and Mary B had lots more planned for this series, I’m curious to find the “why” of their leaving.

Some parting screen shots from this past week’s reading: 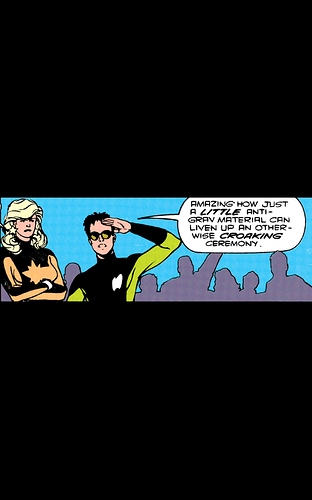 I really liked Matter Eating Lad’s disdain for formality here but also the “come upance” he receives later during the special assignment. Having him turned into a female by injecting him WITH A DISEASE was kinda cool genetic sci fi, IMO. 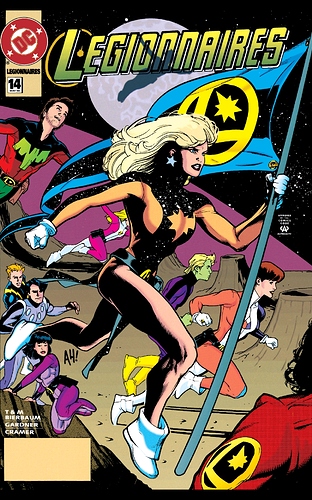 My favorite cover of this set of comics. 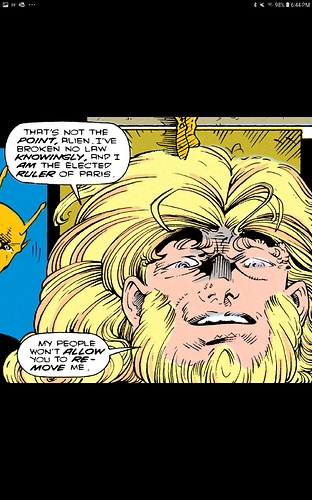 (above) While I thought it was kinda cliche to portray France as land of the crazy violent revolutions, this scene points to the complexity of trying to run an international / interplanetary force like the Legion. The same sovereignty rule challenges and complexities for this youth orgainzation are being featured in Bendis’ current run. 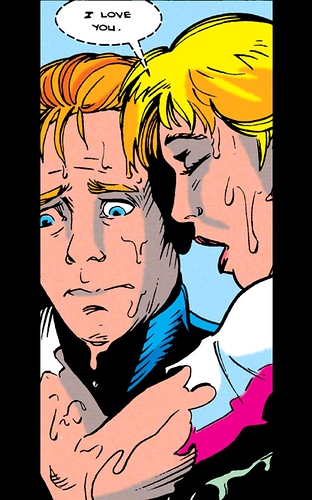 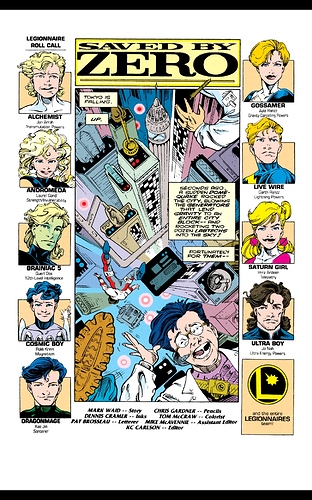 Example of some strange artwork we ran into during this 'artist of the day" run. I tried to look some of these guys up, I got nothing. I’ll try some more later, but maybe they drew a comic once in their lives, just for us… 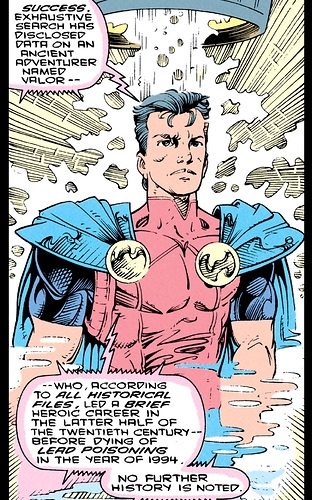 The plan is to read Valor in the months or years to come, but this is the classic DC “hope you weren’t TOOO attached to your favorite heroes, cause it’s time to flush em all again…”