[Legion Fan Club] continues to take you where no other club has dared, searching every nook and cranny of illustrious Legion Comic Book series in search of the Best of Legion Sagas, this time directing the Time Bubble to the very edge of Legion lore, 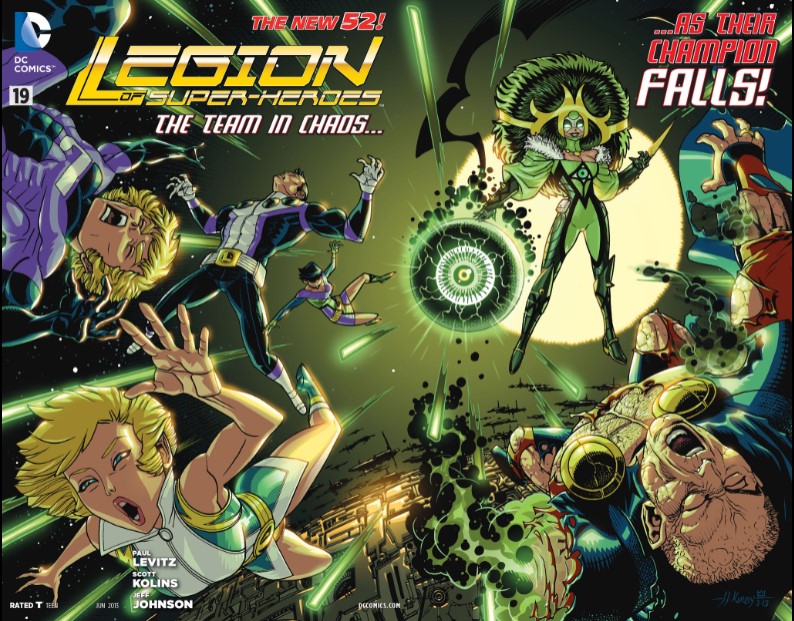 August 2013, after 54 years of wonder, the Legion of Super-Heroes Series Story Train all comes screeching to a halt for over 6 years, and YOU ARE THERE!!! After this, it’s just “guest appearances” elsewhere until Mr. Bendis turns the lights back on. Paul Levitz writes one final missive for us all with lots of Legion love!

LEGION OF SUPER-HEROES (2011-) #18 Separated and in great danger, the Legionnaires must face their greatest foes yet: the new Fatal Five. DC Universe

LEGION OF SUPER-HEROES (2011-) #19 The Legion of Super-Heroes is lost and hurtling into the sun as Mon-El battles the Emerald Empress. Can the strongest Legionnaire stand against one of their strongest villains? DC Universe

LEGION OF SUPER-HEROES (2011-) #20 The Fatal Five spread death on a galactic scale—and even the Legion may be powerless to stop them. DC Universe

LEGION OF SUPER-HEROES (2011-) #21 The Legion is overwhelmed and on the edge of defeat at the hands of the fully formed Fatal Five. DC Universe

LEGION OF SUPER-HEROES (2011-) #22 With the Legion on the edge of defeat, they must look to the past for the sake of their future. DC Universe

LEGION OF SUPER-HEROES (2011-) #23 Final Issue! The Legion picks itself up after the brutal attack from the Fatal Five that nearly destroyed civilization across the cosmos! DC Universe

So, let us know your reflections if you like (spoilers below)

Once we’re all done grieving here at the End of the Legion Story Time Line after a gleeful 59 year run, please secure your seats in the Time Bubble as we hop back to a more positive time, the Legion of the 1970s again!!!

Hey, unless it’s missing from your archive, it looks like the last time we read this book, we actually stopped at issue #15.

Thanks I’ll check I can add it if we missed one or two here.

Thanks. My copy’s header from the Dec 18 post had a typo on the issue run, but now we have the full Final Fatal Five Fight!!!

I actually went back and read this series from start to finish for this week. And now… At 6am on Monday after being awake with my daughter since 3am, I’m ready to comment.

This series, taken as a whole, is pretty great. You can tell there were larger plans for these characters that would have panned out if the series went longer, but the final battle with the five only felt slightly rushed.

I honestly did not party attention to who the artist is on the issues. I guess that means I’m ok with Scott Kolins at for these issues. Didn’t stand out to me but at the same time it did nothing to take away from my enjoyment of the series either.

I think I like Waid’s Legion better, only because I like the sound in the character’s origins and powers that he did. Some of the pairings and relationships in Waid’s interpretation I think paid off as well.

Emerald Empress is one of those characters whose power set I am never quite sure of. It makes it hard to understand what she’s capable of at times. But yes, totally enjoyed this battle with Mon-El and did not expect it to go there way it did. Props for Levitz not being afraid to do some lasting impact to the Legion characters.

I think what I really liked about this this clash was the way it affected the Legion characters themselves, vnot just the Earth, Earth Gov or UP. There were character deaths, injuries and disappearances that all felt impactful without being out of the norm for that character. There are plenty of things left dangling to be explored if this version of the Legion were ever revisited.

So I’d rather this maybe an 8 on av ten scale. Good to great. I almost want to go back and re read these issues just because it felt like a lot happened in each issue.

That’s a great point about Emerald Empress. How much of her power is science how much is Magic? Why is she called an Empress and why is she Emerald? Think I’ll dig in on that this morning.

I like both the most recent Levitz and the most recent Waid versions, I’m just still puzzled ay how they dropped Waid (and Levitz) like a rock after around 3 years of him writing it. Sounds like it was due to fan reaction for Waid and lack of sales for Levitz.

I tried to look this up myself, just on the internets.

Some things that seem to hold true for most versions of the Emerald Empress is the ability to fly, survive in space, and shoot power blasts. Sometimes she has the power of illusion (or matter rearrangement?), and along with power blasts can form objects or protective shields. In some she has super strength granted by the Eye, in others she can grow large.

Again, this wasn’t deep research here, just looking on a few websites at some character history and powers. Her power blasts have to be among some of the more powerful in the DC universe to injure Mon El like that? Or am I completely off on Mon El’s power levels?

Mon-el and Superboy have pretty similar strengths, so you’re right about Mon-el and what that means about the Empress’ power blasts.

I had to search for it. Fatal Five had an entry but not Emerald Empress alone. This is all it said about her:

The Emerald Empress controls the mystical Eye of Ekron, which can channel immense energies, and was once part of a super powerful being named Ekron.

Well we’ll be seeing more of the Empress in other Legion readings ( and during monthly watchalongs) as we continue to dig in throughout this year.

She appeared in the Justice League vs Fatal Five animated film this year.

I like the one theory one writer gave that whatever the Emerald Eye is from is what the Green Lantern battery power came from later.

I like the one theory one writer gave that whatever the Emerald Eye is from is what the Green Lantern battery power came from later.

I first saw that theory in 52. I really like that origin also. It makes sense that it would be powerful, a little bit wilder than welding a ring, and also more limited in its ability to make constructs.

Man, this arc is NOT messing around. When they call Keith Giffen the “consulting destructivist,” they’re not kidding! Like, how are we sleeping on the fact that Sun Boy was ■■■■■■■ killed off screen and eaten by aliens.

This truly feels like the end of the Legion, and while it’s true to the name, I’m not sure how satisfying it is. Like, the Legion just…disbands, and the reason for it feels a little lackluster.

It thas it’s good moments, but it’s not really my favorite. I think the best art in these issues are defnitely Kevin Maguire and Keith Giffen’s issues.

Now that you’ve read the Mark Waid 2006 “Supergirl” version of Legion, do you prefer the modified versions of Legion like Waid did, or the more classic version like this final series by Levitz? Why or why not?

There’s definitely aspects of the Threeboot I prefer in terms of writing and overall quality, but I do enjoy the classic Legion and their stories. Preferably I would like to have seen this Retroboot Legion with a writer who is fresher and has a better, more modern take on storytelling.

How epic is the battle between Emerald Empress and Mon-El?

How would you rate this final multi-issue clash between the Legion and the Fatal Five?

I’d give it a solid 7/7.5 – great, climactic and crazy scramble and fight, with a kind of “eh” conclusion.

Yeah I get the feeling somebody told Levitz he had to disband the Legion like that. Wow is it ever a horrible ending, the exact opposite of inspiring.

A moment of silence for Sun boy.

It’s possible – or maybe like @Meisaj said, it’s possible that Levitz had more in mind as reasonings to break up the Legion as a potential endgame for his run and wrapped it up more quickly than he thought. I get the feeling that the big thing that Levitz was told at the end of that was to imply that this Legion was on a different Earth so they could do something with the main Earth’s future.

Speaking of editorial, I always got the vibe that editorial was trying to change details about the Legion’s past via Flashpoint by saying that this was the first encounter the Legion had with the Fatal Five.

And yes, RIP Sun Boy. He went from a seasoned, powerful Legion veteran to just plain…seasoned.

This truly feels like the end of the Legion, and while it’s true to the name, I’m not sure how satisfying it is. Like, the Legion just…disbands, and the reason for it feels a little lackluster.

Your statement for me thinking, why does the UP make the Legion disband?

They don’t seem to have the same argument as say Gotham and Batman or Metropolis and Superman, where villains flock to the Legion and everyone puts some blame on the heroes for the villains existence. The Fatal Five definitely were attacking the Legion, but more so it seemed to get them out of the way so they could rule in place of the UP.

It’s that chicken and egg thing. Were there super powered villains before the Legion? How did they deal with them? In current era stories it always seems like super powers started becoming widespread around the same time, making sense that super powered heroes and villains would emerge concurrently. But in the Legion’s era, super abilities are more common.

It’s implied that it happens because the thing we see in #0 with Brainiac 5 taking something from the old Colu archives was actually instrumental in the creation of Tharok. But they never fully explained how or why or how it came to light. And I think if Brainiac 5 was really that culpable, I wonder why the UP didn’t just…I dunno…arrest Brainiac?

It’s funny, thinking and talking about this kind of makes it feel more slap-dash that I initially felt, like I kinda want to change and lower the score in my answer.

The ending also hints that Brainiac is also needed just to reboot the technology of the universe as well. So it probably is one of those things where he may be culpable, but is still needed.