The United Planets…I mean the [Legion Fan Club] presents: Supergirl’s final stint in the Legion (as of January 2020 anyway, and assuming this really is Supergirl)!!! 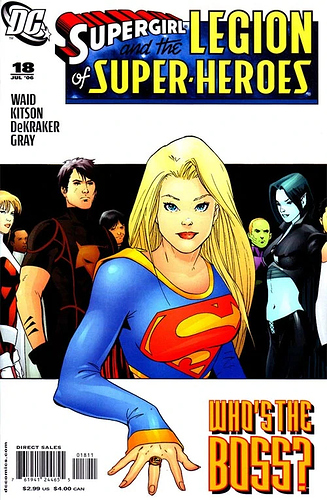 Time to unwrap yet another unique and fun iteration of the Legion of Super-Heroes, this time in 2006!
This week we read:
SUPERGIRL AND THE LEGION OF SUPER-HEROES (2006-) #16 – 21, as presented by Mark Waid and Barry Kitson (and friends)!

Let us know your reaction to the story here:

SUPERGIRL AND THE LEGION OF SUPER-HEROES (2006-) #19 Chameleon takes center stage as he puts his detective skills to work on a challenging case that could have major consequences for 31st century Earth! DC Universe

SUPERGIRL AND THE LEGION OF SUPER-HEROES (2006-) #21 The Legion struggles against the mighty giants of Colossal Boy’s hometown! And with Brainiac’s resurrection plan in action, can the Legion trust him to play God?
https://www.dcuniverse.com/comics/book/supergirl-and-the-legion-of-super-heroes-2006-21/06faea07-f97b-4794-8291-e687a7bafac6

If you follow Supergirl on TV, you are going to enjoy the themes and relationships this time around!
Stuff to ponder and let us know your thoughts concerning:

Next week: we catch up on some unfinished business a few years later in Legion publication history!

Nice to get into the Threeboot, finally. I do remember reading the first arc or so of that series back when I was first getting into comics and really liking it. Looking forward to seeing them again knowing more about them now.

It’s a great-looking slice of Legion history for sure. I’m a big Mark Waid fan often as well. It’s amazing that he can create the really dark anti-hero stuff like Irredeemable at Boom! as well as series like Archie or Champions over at Marvel.

So I cruised through these in one evening. I really enjoyed them. I had forgotten how well of a story Mark Waid could craft.

I think Supergirl is quite different from Jon Kent. While Jon feels out of place, Supergirl really just goes with the flow and lets nothing affect her at all. Supergirl, despite being relatively new at the time, also comes across as a more natural superhero than I think Jon is portrayed, which affects their interactions with the Legion.

So I never read or followed much of this version of Supergirl, so I’m struggling to figure out where the story is going. It is interesting that the Dominators made an appearance and then have been consciously absent from most of the story. Soooo… totally a bomb?

I like this over confident and condescending version of Brainiac. It makes total sense that he would come up with ways to negate peoples powers. And I think Dream Girl is a good match for him relationship-wise. Because she is unpredictable and aloof, she’s challenges Brainiac in a way that others don’t, which makes for interesting storytelling and s good relationship pair.

One thing I love about this era is the take on Chameleon. Both the character design and the idea of Durlans have trouble with one form species.

This story is great. Honestly, just a fun read, reminds me why I have a bunch of trades from Mark Waid that are access the comics spectrum (and you’re right, his take on Archie was amazing).

The art was good too, but I sometimes struggle with seeing teams that are supposed to be teenagers (or underagers?) look so adult. It’s hard to see them as young when most of them have the exact body size and type of the adults.

If you are reading the current Legion by Bendis, did the first two issue remind you much of Jon Kent’s experience with the Legion? If so, which parts?

It’s similar in that both are bright, young teens who are experiencing a brave new world they never could have imagined. The difference being that Jon was perfectly aware of what’s going on and able to go back and forth from the future to the present whenever he wants.

Kara, on the other hand, is basically going through a psychotic break, trying to pretend this is all a dream so she doesn’t have to acknowledge that Krypton is gone. It’s sad, but easy to understand why she goes into that state.

Hmm, on one hand, we do see an easy way to explain how she comes to the 31st Century because of Infinite Crisis.

On the other hand, there is the fact that Supergirl did have her own ongoing title at the time which was also going through it’s own One Year Later storyline, where her and Power Girl were protecting the Lost City of Kandor as Nightwing and Flamebird: 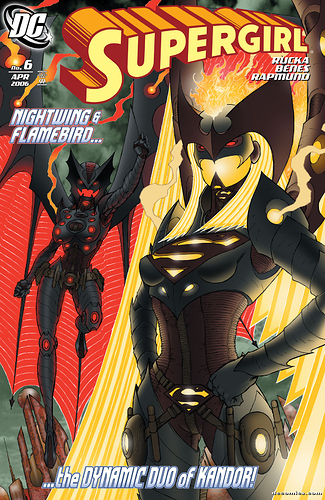 I haven’t read those issues yet, so I don’t know how they mesh up, if at all, but I do find that interesting.

This version of Legion is taking everything we have read up to this point and blending it, while adding a tad new. What do you think of the classic characters like Brainiac and Saturn Girl this time around? Which new character appeals to you in this series?

I think Brainiac’s story here is pretty interesting – it feels true to who he was in the past, but done in a more modern context. I honestly don’t remember much different about Saturn Girl in this story at all.

In terms of classic/new elements, I think the part that this series does best is the way they interpret the world in general. It feels in line with what we’ve seen, but with a slightly more…I won’t say dystopian, but it takes a lot of fears and concerns about modern life and amps them up, which I think makes for a more interesting take on the future.

One difference not mentioned that I like was the tweak they did with Colossal Boy where he’s naturally sixty-something feet tall and his power is to shrink to average human size. That was a neat new detail.

Do you prefer Brainiac 5 in a relationship with Nura or with Kara? Why?

Kind of a hard question to ask. On one hand, to my recollection, I don’t think we’ve really seen a series where Kara and Brainy are actually in a relationship. They’ll flirt around a little bit, but nothing serious.

On the other, while it looks like this Brainy and Nura were closer, we really don’t see much of the actual relationship in these issues. We see Brainy trying in vain to ressurect her, only to end up seemingly having some sort of BSG Gaius/Six dynamic at the end (because I’m not sure if her consciousness is really with him, or if she’s truly dead and Brainy is grieving in his own way).

Really, the only time I’ve really seen the two as a couple is in a few episodes of CW’s Supergirl, and honestly, I found both characters really dull, as well as the show in general.

How would you rate this particular Writer / Artist team for Legion this time around, 1 to 10, 10 being the best? Why?

I’ll give it a solid 8. Waid (and Tony Bedard near the end) had great ideas and Barry Kitson is a solid draftsman, making all the future stuff look cool and making the characters really emote and work.

One difference not mentioned that I like was the tweak they did with Colossal Boy where he’s naturally sixty-something feet tall and his power is to shrink to average human size. That was a neat new detail.

They did similar things for few characters if I remember correctly. Phantom Girl (I think that’s her) goes back and for between her dimension and this one, rather than her peers being intangible.

It’s another way of interpreting their powers and origins without changing the character too much.

Interesting observations, @Jay_Kay and @Meisaj . There’s lots to like both from the writing and the artwork with this iteration of the Legion with Supergirl. I also got a kick out of Colossal Boy’s “inverse” issue compared to how we usually view his powers, and the Phantom Girl “reboot” is intriguing as well.

Later in this series we’ll see DC make the editorial decision to abandon what Waid so skillfully wove here and instead bring in the guy who brought the Legion into modern age Comic Book storytelling as a 13 year old in the early '60s, Jim Shooter, and then a year later, Paul Levitz, and DC never looked back. Very curious stuff, as Mark Waid really did have a lot things right here.

As I recall, there was a fair amount of backlash about this run at the time – old school fans didn’t like the idea of the Legion being all “eat it, Grandpa.”

Wow. Well we did have the internetz by then