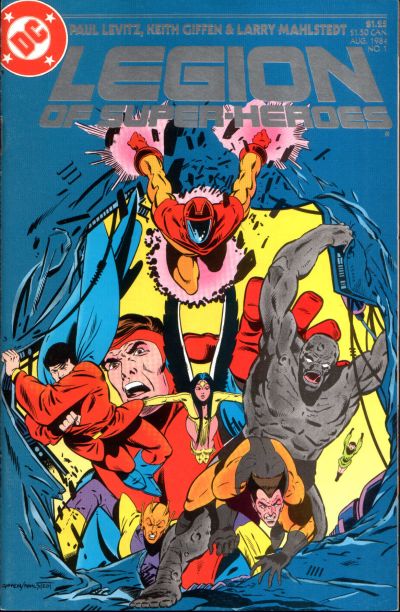 It was a time like no other, when suddenly: there were TWO Legion of Super-Heroes series being published the very same time, for the first time ever! The one was business as usual, the other was printed with fancier heavier paper and vibrant coloring, and a tad more expensive!
The year: 1984
THE LEGION OF SUPER-HEROES (1980-) #313 came out July 4th, and all was calm. On the last page of the comic, this appeared:

So, get ready for some mashup fun, as we try to navigate our Legion Time Bubble through two separate but connected Legion storylines running in parallel by the same writing team- at first anyway. The Legion is such a large group, and the galaxy is so huge, Levitz and Giffen just might get away with this!

LEGION OF SUPER-HEROES (1984-) #1 Lightning Lord returns, swearing vengeance and death upon his brother Lightning Lad. Meanwhile, super-criminals from across the galaxy begin to disappear!
https://www.dcuniverse.com/comics/book/legion-of-super-heroes-1984-1/776fa1c1-dc24-4080-9f0d-e91b98a24044

TALES OF THE LEGION (1984-) #314 Is Ontiir a double agent for the Dark Circle or the Science Police? Also, the “new” Invisible Kid offers his spot in the Legion to the “just returned and not quite the same” Lyle Norg! DC Universe

LEGION OF SUPER-HEROES (1984-) #2 As Saturn Girl prepares to give birth, the Legion of Super-Villains attacks the Legion of Super-Heroes! But the attack might just be a bigger distraction from the evil masterminds’ real plan of conquest.
https://www.dcuniverse.com/comics/book/legion-of-super-heroes-1984-2/7b278cbc-5837-4c09-82d4-a8e176373a6a

TALES OF THE LEGION (1984-) #315 The Legionnaires take on the Dark Circle and Ontiir meets his maker!
DC Universe

THE LEGION OF SUPER-HEROES ANNUAL (1982-) #3 Mordru is free! Saturn Girl gives birth! And what do these events have to do with Darkseid? The curse is beginning…beware!DC Universe

Questions for us to debate as a Fan Club (spoilers lurk):

Next week: We continue to celebrate Supergirl with the Legion, but where and when?? Will she still be sporting that red headband and those crazy curls? Join us same Legion-time, same Legion-channel, next week, to find out!!!

I think the legion can support two series. I’m not a fan of series were you have to read both of them to follow one storyline though. They did a good job here making the issuea flow without being essential to read both series to understand what was going on.

If the Legion were to support 2+ series I love the idea of a spotlight series focusing on different Legion members and doing solo or partner stories. Although that feels a little anti-Legion. More than any other series they seem to be a team book.

I think the pregnancy / birth was handled fine. I idea that birth has to coincide with some bigger event always gets me in stories. I don’t think the birth needed to happen at the exact same moment everything was covered in darkness to add any drama or mystery. However the Darkseid twist was great.

I haven’t read a lot with Mordu. But I do like the way he is presented, as an almost unbeatable foe that only luck has allowed the Legion to overcome in the past. The Legion - as I know it - is enternally optimistic, and that is one of the traits shown in these issues when they suspect Mordu is their for.

I love the 'flying through time" Superman/Supergirl trait. It allows her to just rush off as soon as she wants to, no time bubble needed. Made it odd for her to be there for that specific storyline and then abruptly decide she needs to leave and does so.

I gotta say, thanks for putting the cover as the main image – for some reason when it was the other one I kept looking over this and forgetting about it!

@Meisaj , sounds like the kickoff of these 2 series running at the same time worked well for you. I like these first few issues as well; I’ll keep trying to keep the week we do this era as a combo reading as long as the stories make sense. I am thinking though before long it’ll go more like you suggest above: two parallel titles that you can read one of without reading the other.

Aw man, you are on to me, yup, I noticed no one flinched when I posted this for days, so decided this morning to do a little switcheroo.

When you switch the images, it made me have to do a double-take when searching for this post. But I came back and found it eventually.

Still in the middle of reading the issues, but so far I will say that I feel like the new series has the stronger story so far.

As for whether the Legion can support two books, well, it has in the past. We quickly see it here in this segment, and then there was Legion of Super Heroes + Legionaries, and most recently in the New 52 we had the regular Legion book plus Legion Lost. I think in terms of characters and stories, it can absolutely support two books. Hell, with the amount of characters in the Legion, it might be necessary to make sure all the characters get some meaty moments to shine.

On the other hand, I’m not sure how well it would do sales wise. Like, I’m sure the current Legion book is doing okay between the drought we’ve been through, and whether you love him or hate him, one has to admit that Bendis sells books. But would another book be viable in today’s market? I’m honestly not sure.

What did you like about this storyline of Saturn Girl becoming a mother? Did any parts of the story get you upset or frustrated?

It was interesting seeing them try to balance their more domestic life with their innate superhero nature – I have to agree with her doctor that Saturn Girl going out to stop bad guys nine months pregnant is hella dumb, but it’s just who she is. It should be interesting to see how that becomes a conflict for them, to keep up the rigors of being in the Legion and raise a child.

But I think the big thing about this story is Darkseid’s curse and the twin boy being Validus. That was pretty shocking, and definitely the kind of cruel thing he would pull off. I’m really curious to see if/when they find this out and what happens then.

How’s your Mordru this time around compared to his other appearances we have read so far?

I think he worked better here because not only was he not the truly active threat, but it was interesting to see the perspective of Jacque, who would have been a normal citizen during Earthwar and the terror he feels at the prospect of Mordru coming back.

Did they pull off successfully this whole “two series at once intertwined” concept in your opinion? What worked?

I think so. Both series were connected enough where they would touch on each other but still did their own thing, with “Tales” handling the Dark Circle and Legion dealing with Lightning Lord’s Legion of Super Villains. Doing it this way also made it so both stories and side stories can have more room to breathe and do more than just move the plot forward.

This storyline is more evidence that helps prove the point that the Levitz / Giffen Legion run was one of the top if not the top moments to date in Legion publishing history. It’s interesting that around the same time the Titans excellence was occurring from Wolfman / Perez. Maybe creative greatness inspires other writers to reach for the heights as well!