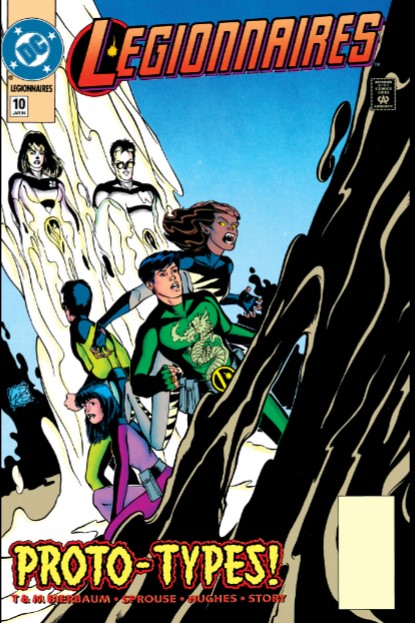 Due to our intense Watchalong this week, we’ll keep the reading lite and fun!
Next-issue soap opera romance relationship stuff……with a little sci-fi and super-heroics on the side, thanks!

LEGIONNAIRES (1993-) #8 The government of Colu seizes Brainiac 5 in a power play to claim the Legionnaire’s intelligence for themselves, sending Andromeda on a rampage. Also, Saturn Girl wrestles with problems of conscience. DC Universe

LEGIONNAIRES (1993-) #10 The stranded Legionnaires encounter mores surprises from their past. Plus, the new Kid Psycho makes his debut. DC Universe

LEGIONNAIRES (1993-) #11 Kid Quantum joins the Legionnaires, just as several members of the team disappear after an encounter with Kid Psycho. DC Universe

Next week: Let’s check in on Mr. Levitz and Mr. Giffen circa early ‘80s excellence, shall we?

So I have to say, I really enjoyed these issues. A lot. I thought the multiple storylines were handled wonderfully, that the dialogue and mood was light and fun, and it just flowed nicely. I never felt lost, never wondered what was going on, none of that.

At least in no major way. I don’t know Kid Quantum’s background, so the proteans are a little weird, but not enough to distract from the story telling and enjoyment.

It’s pretty obvious that Andromeda is a replacement for Supergirl. Their powers are ridiculously similar, although she seems way more braggadocios than Supergirl was. However I think it works for her character.

I honestly got the most amusement out of the Cham and Computo interactions. They appeared in too few pages. The way they butt heads while not disagreeing with each other is pretty great. The whole Chain of Command vs experience debate.

I’m having a little trouble with comparing Satellite Earth and other planets. They seem to treat the different parts of Earth not that different from being on another planet. New people to explore, mysteries, cut off from others, etc.

The writing was working for me on all fronts. The characters had different personalities and traits, and the stories flowed. These issues were quick and I didn’t want to stop at the end. Maybe a 9 fo mer. Or at least for an early Saturday read for just enjoyment.

Art fit the story. It was clean. Not to descript, not to bland. 7

Overall, like I said I really enjoyed it. The stories weren’t heavy I maybe didn’t have a lot of consequence because of that. But were fun reads.

Well it’s definitely pretty good writing and and concept because this version of Legion kept going for almost 10 years. So even though it’s not my personal favorite version, I have to acknowledge the fact that it was a good husband wife writing team and it wasn’t a dumb idea to have a younger version of Legion.

To me it’s obvious that Mr. Bendis is mixing some of the feel of this version of Legion with the new one being published now.

Actually I’m oversimplifying things; this version of Legionnaires lasts for about three years and then you have Zero Hour that explodes everything as we’ll see.

Oh man… Zero Hour. For some reason I love that crazy crossover. Not that to much came of that crossover.

Like I said, I don’t know if these would be my favorite comics, or even make that list. But for a Saturday morning spent sipping coffee and reading some comics before my daughter woke up, I certainly had worse choices.

I’m on issue 3 right now. I’m really liking it so far. The legionnaires are jerks, lol. I will try to get to the reading. I’m surprised at how many of the legion have different names than I’m used to.

Only one the second issue so far, but one thing I’m really liking is some of the art talent on this book, future big name talents. First we get future Sandman artist Colleen Doran, and then the return of ADAM FREAKING HUGHES. Remember when Hughes would actually draw interior comics pages? Pepperage Farm remembers.

Nothing like a winter weekend to enjoy some colorful comics!

The legionnaires are jerks. But that’s what makes them fun to read. It’s nice to see that with as large of cast as there is here, they still have distinct personalities that clearly comes across. A cast this large, characters could get lost. I don’t feel like that’s happening here though.

I’m guessing Supergirl, considering her connection to Brainiac 5, though in those comics I don’t remember her ever being that boisterous and lively in her interactions – though honestly back in the Silver Age most of the characters didn’t have a lot by way of personality.

I think it works well enough. She doesn’t feel like a carbon-copy replacement.

Again, I find myself really liking Matter Eater Lad, he’s become a real highlight in this series so far with me.

As for most intriguing, I am curious to see what happens with Live Wire after what he did to Cosmic Boy – I’m thinking he either goes through a genuine redemption arc, or this is the start of him going super-villain.

I really like the Satellite City of Earth stuff in showing the unique far-off future stuff that’s possible with the Legion, but I also love the crazy Star Trek like missions on other planets. I guess as a wise one once said:

I’d rate it a solid 8. I’m really enjoying the artists coming in for the issues as well as these young and inexperienced heroes learning on the fly.

Felt a bit like I was in some sort of 90s time warp this last week between reading this and reading Huntress issues for my own club. Strange mix that.

I just finished reading the issues here so I’ll be coming back in sometime tomorrow to actually answer the questions. I just wanted to say I really enjoyed these issues. Pretty much everything about this series is hitting all the right notes with me.

Jay_Kay, it’s going to be interesting to find out if Brian Michael Bendis will include any of the three Superman / Supergirl themed superheroines of the 31st century Legion Universe, or if maybe he just have Jon bring in the current Supergirl along with Damian. I agree, Andromeda in Legionnaires doesn’t feel like a direct copy of Supergirl (although my thought there is “which Supergirl?” lol).

At the same time Supergirl and Superboy were stopping by the Legion as “part time” reservists during the early '80s Levitz / Giffen run, there was also a distant relative of Superman at the Legion Academy, Laurel Kent. After the first Crisis, she was written out of things a few years later (as we’ll hopefully eventually get to here). Then, a Daxamite Laurel Gand is introduced to Legion. During a storyline shortly before Legionnaires, a magically empowered villainess Glorinth changes time and has Laurel Gand replace Supergirl’s EVERY INTERACTION with the Legion from the 1959 stories on. She is alive having adventures during this story we are reading. She is related to Mon-el just like Supergirl was related to Superman.

Andromeda is a younger cloned version of Laurel Gand from the “Batch SW6.” So she kind of represents Supergirl here, but maybe more in power set.

Again, strap in everyone once we read what happens to Legion right after Zero Hour- although we may not get there for a while, our 6 year plan includes a visit there.

Last thought for now: all these versions of Legion and all these twisty-turney timeline changes still reside in one spot: the DC Universe 1,000 years from now. To me, that helps keep this crazy mashup of a 60 year old series somewhat cohesive and fcitionally believable.

Oh, also Jay_Kay, I agree, I also love having the return of Matter Eating Lad! Again, Bendis appears to be including him in this new 2020 Legion version as well.

I’m surprised though the comics featuring Matter Eating Lad in the 60’s didn’t have a Parental Advisory on the front, “Warning, parents of children under the age of 11, reading this issue may compel your little darlings to try to ingest mud pies and button batteries.”

Jay_Kay, it’s going to be interesting to find out if Brian Michael Bendis will include any of the three Superman / Supergirl themed superheroines of the 31st century Legion Universe, or if maybe he just have Jon bring in the current Supergirl along with Damian.

I wonder the same thing @Don-El. I’m not Bendis’s biggest fan but it should be interesting to see. I’d kind of like to see some interaction between Supergirl and someone like Andromeda.

I think it comes out this week

Yep – in fact they posted a preview for it on the DC Comics website.

Is everyone pretty much done here , ready for the new reading to be launched?

For the Brainiac story in issue 8, who does Andromeda seem to replace from the older Legionstories? Do you like the parallels?

She seems to be replacing Supergirl but she’s different enough from her that I wasn’t bothered by the replacement. I actually like Andromeda a lot and think she’s a great character.

For the arc of #9-11, which Legionnaires are presented best and most intriguing? Why?

Kid Quantum is my pick for most intriguing this time around. I like to see the return of characters lost so this had my attention.

Which setting do you prefer for this version of Legion: Earth the Satellite City or when they are onother planets?

I like when they are on other planets but then again I have this tendency to prefer space related stories to have different planetary settings rather than to remain static in one place. Earth the Satellite City is nice but for my sci-fi buck I like seeing other planets.

I’m glad you had some enjoyment reading this past week’s curated selection, @JasonTodd428 !

For some reason, at this point I like the volatile Andromeda clone here more than the “real” version of her in the parallel Legion stories of the same time.

I’m also a sci fi buff, in fact, I was reading Sci Fi from Asimov, Harlan Ellison, Paul Silverberg etc before I started reading comics. Of course that’s not too surprising, considering I was an impressionable lad growing up during the intense space race of the 1960s! For sure that is a big part of why I started up that now infamous Petition for the Legion a year ago here that later turned into this Fan Club.

Get ready to slam back to the Levitz-Giffen party of the early '80s again, here we go!!!