This first week of the 2020 New Year, [Legion Fan Club] rushes to the end of Legion Story Time (until the new Legion started up a month or so ago) with the conclusion of New 52 Legion Lost! 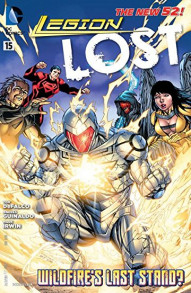 Legion Lost (2011) #12 The team devises a plan to save their future by staying alive in the present! Will they survive the fight against the Metamerican and the Metamarines, or lose the battle against each other? DC Universe

Legion Lost (2011) #0 The New 52 origin of the Legionnaire Timber Wolf in a tale of revenge and the vicious circle it creates! DC Universe

Legion Lost (2011) #13 Harvest returns as Kwark the Space Barbarian comes forth to kill! The team may have survived The Culling, but will they make it through this adventure? DC Universe

Legion Lost (2011) #14 When Earth is threatened by a genocidal horde the Lost Legionnaires must form an uneasy alliance with their enemy: Harvest! DC Universe

Legion Lost (2011) #15 The lost Legionnaires must decide if they are willing to sacrifice millions in order to save billions! DC Universe

Legion Lost (2011) #16 In order to save billions of lives, the Lost Legionnaires must decide if they are willing to sacrifice millions when they detonate a bomb that will destroy the alien machine from Daggor! DC Universe

Questions to consider (spoilers ahead):

Next week is our Wednesday night Watchalong, I hope to see many of your then!

We’ll be reading more of the Legionnaires 90’s run next week as well, to be posted Wednesday as well.

I’ll try really hard to make this one.

I personally was buying the two Legion titles at the time so I’m still a little startled that the decision was made to stop all the issues when that happened 7 years ago almost to the day (1/16/2013).

I also think the current Legion run deliberately tying in Jonathan Kent and Damian is genius! That’s how you bring in new readers… that’s how it was done back in the late fifties successfully.

I was buying both of them as well. Legion Lost coming to an end was disappointing, but I felt it had a good run.

I enjoyed this week’s read. I know I can purchase these issues when they came out, but I don’t think I’ve read them since then. I particularly enjoyed the last four issues as they told a complete story.

As we read the final issues of Legion during New 52, first for the regular series where the Legion is disbanded, and now the final precipice of this series’ end, I am left wondering a couple of things. What was the master plan here by DC? Was it “oh well, Legion isn’t selling, so I guess we’ll toss it in the Metal Men / Scooter closet for now”? Or…was there just something about a utopian Legion future that didn’t click with the Future’s End and later Dark Metal fever visions? I wish it was something else, but it took Mr. Bendis jumping over from Marvel to get the Legion train going again. Frankly I do have concerns if this Legion of 2020 will continue past 12 issues, guess we’ll see.

I totally agree that it feels like there wasn’t an overarching plan for legion in the 52 era. There were a lot of underlying plot hints that I think the writer teased that never came to fruition. It was very frustrating.

I always thought the reason the Legion was set 1,000 years ahead of the current DC continuity was to allow for all sorts of stories without conflicting with the Legion era. Nothing says there couldn’t be Future’s End or Dark Metal in current or near future times and a Legion in the distant future. But then it sets up Legion as a stand alone team / book when I think a lot of modern comic books survive or live on the crossovers and guest stars here or there.

It’s always a good and engrossing read when someone from the present goes to the future and has an adventure with the 30th century Legion. Superboy, Supergirl, Superman and now apparently Damian Wayne, it works great. Attempts like this Legion Lost series, or the Karate Kid or Valor (Monel) series to place the future Legion members in our present are always kinda dicey and rocky to read for some reason. For me personally, I come to Legion to bask in the hope of the positive utopian future it usually presents.

It’s interesting that Bendis’ newest iteration of the Legion is bringing together / mashing up many of the past decades’ versions of Legion- the planet Earth is now a giant space platform, but not the tiny sad one in Legionnaires of the 1990s. The core 1950’s Legion members are there, and at the same age they were in those original stories, but they are mixing in members who didn’t appear originally until much later.

I haven’t checked out new Legion yet. But then again I haven’t traveled out to my LCS in a few months. Life’s been busy. I’m looking forward to grabbing some Bendis Legion and jumping in.

It’s nice when it is not disregarding the past, but rather building on elements that have come before or reimagining them in a new way.

I completely agree about The Legion. Being in stories in present DC vs characters visiting the Legion era. It makes a big difference.

Although I did get a kick out the time Batman fought Karate Kid and the only way Batman won was by having Black Lighting help. I remember something about Karate Kid scoring really high on a fighting rating system. I used to love comic books having arbitrary fighting and skills rating systems. I collected all the X-Men and Marvel trading cards to compare characters.

Then I watched Dragon Ball Z and really laughed my ass off on character ratings. 1,000,000 POWER!!!

I think the reveal of Echo in general is probably the biggest one, especially considering that there have been at least one agent that infiltrated into the Legion. That I think has the most potential to tell interesting stories.

I guess? I really didn’t get that much of a werewolf story vibe in this. It felt more like just a standard vigilante/revenge plot.

I think calling Kwark a “character” is kind of an insult to characters. I didn’t find him any way convincing or interesting in the least.

It was probably as well written as it could when one gets the feeling that Defalco was probably told immediately before that the book was cancelled and to wrap things up as quick as he could. It just overall felt very messy and half-thought out and just kind of bland overall.

The only bit I really liked was the scenes in the last issue with Dawnstar and Wildfire.

I won’t lie, Legion Lost (2011) isn’t my favorite version of Legion, but it’s still bittersweet seeing the rough “final” landings for both this and regular New 52 Legion.

Concerning the werewolf aspect, maybe the whole concept of Timber Wolf / Wolfsbane / Sabretooth is closer to the Dr. Jekyll / Mr. Hyde story, the more savage/ beastial possibiliies of ourselves vs the more reflective / civilized ideal.

I think I may have talked about this when we first started talking about this book, but I feel like this book’s overall a bit of a wasted opportunity with such a cool premise. I mean, potentially we had a lot of ways to really mess with and push these characters to their limit and see what makes them tick, but when they weren’t tying into other teen titles, they were just kind of taking the easy approach every time.

I agree that this title felt like wasted potential. I was thinking about it last night, and I’m wondering if the reason that Superboy and the ravagers were pulled into the last four issues of this title was with hope that the dangling plot threads could be picked up in those titles in the future. Especially if Defalco had to end this title quickly.

The problem with that though, is that other than the legion lost tteam themselves, the plot threads left dangling just aren’t that interesting. Kwark was a one dimensional character with no backstory, therefore the “planet threatening communication device” or whatever it is isn’t really worth following up either. It’s a random mcgugfin with no where to go.

This title has some of my favorite Legion characters I’ve encountered so far, but just sort of sputters. That doesn’t mean I didn’t enjoy it, I did, but can see both it’s potential and it’s shortcomings.

I am interested though, how many issues of this run were either cross-overs or heavily featured guest stars vs stand alone team issues? Maybe I’ll go back and check.

It’s like two different series. You had the first writer with his vision for the first 5 issues or so, then DeFalco came in for the rest.