Fellow Legion fans, we continue to enjoy what we can of the bittersweet final gasp of a Legion series from New 52 til now. Many of your favs reappear to delight you again, Comet Queen, Dragonwing, Chemical Kid, etc. 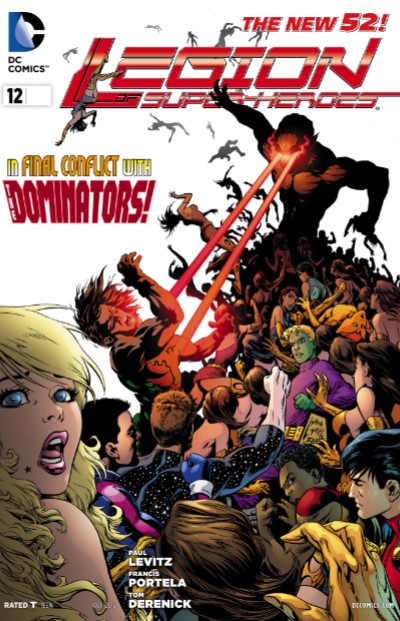 LEGION OF SUPER-HEROES (2011-) #11 Cosmic Boy threatens Mon-El’s leadership if he doesn’t act immediately to save not only Brainiac and Dream Girl, but also the outclassed squad who’ve gone to rescue them. DC Universe

LEGION OF SUPER-HEROES (2011-) #12 The Legion’s battle against the Dominators comes to an epic conclusion and the fate of Comet Queen is revealed. DC Universe

LEGION OF SUPER-HEROES (2011-) #0 The tale of Brainiac’s admission into the Legion of Super-Heroes. DC Universe

LEGION OF SUPER-HEROES (2011-) #14 Element Lad tries to take Chemical Kid under his wing as they go after the mercenaries who injured Cosmic Boy. DC Universe

LEGION OF SUPER-HEROES (2011-) #15 Welcome to Barcelona! So what’s this 21st century city doing in the 31st century? Glorith, Dragonwing and Chemical Kid are on the case! DC Universe

The next two weeks we’ll try to go a little lighter for the holidays. There are some fun gaps in the eras we’ve already spent time in that we’ll catch up on, starting next week with the very early Levitz days of the late 70s!

I feel bad for skipping last week but I’ll try to get to this one.

I’ll try to make this one.

Anybody read Legion #2 (that came out this week) yet?

Yup, excellent fare. And I do mean “fare”, love “heaven” for young adults.

I liked Heaven too. Is that new or something established within Legion lore?

Very new! I’m pretty sure Bendis is trying to open our eyes to what it really is like to be an older teenager or a young adult liking to eat when you’re being social. I actually have tapes we used to make, a buddy of mine and I,older teens… on one recording we’re raiding my parents’ refrigerator and eating cold leftover steak etc…looking back at it I’m like Wow we must have been expensive to keep around… and wow did we have appetites back then

I really liked the second issue, it really did some interesting new developments and ideas with the characters that feel pretty interesting. Like, I want to see Jon finally sit down for the orientation because I WANT TO KNOW ALL THE THINGS.

Related to it, I’m especially happy about it because Doomsday Clock on the same day seemingly confirmed something that I thought was going to be missing, without going into spoilers.

Ok. On a long car ride and read these this morning. Thankfully I don’t get car sick.

I really enjoyed these comics - it’s my first time reading these - but they left me with some questions, which I’ve interspersed in my answers.

Alright… Those are my thoughts. Time to find some more to read until it’s my turn to drive.

The Invasion crossover of the late '80s did indeed feature the Dominators in present day DC. They started though in early Legion stories by Jim Shooter in 1967 (Adventure Comics #361). They showed up again fairly recently in some late '70s Legion fare we were reading as one of maybe 5 main alien races trying to broker a peace deal while I believe it was Mordru and others schemed to stop it all.

They didn’t become the evil scientist species until Invasion.

In a comic book writer’s time paradox, after this verison of the Dominators that appears in the 20th century DC Universe, the 30th century Dominators suddenly are doing genetic testing and causing all kinds of trouble that culminates in the Legionnaires series we’ve been reading.

Their current look is considered offensive to some. They remind me a lot of Wally Wood’s Mars Attacks bubble gum cards of the '60s. 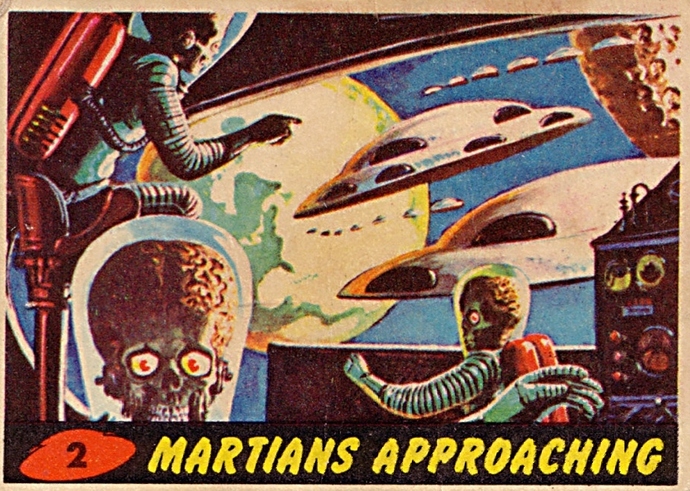 It’s all in the smile, see?

Let’s see what other culture on Earth is often portrayed as wearing a robe and folding their hands like that …and this is like a 2011-2012 comic book so it’s a little surprising that this was still going on in the portrayal of the Dominators.

Ha. I missed the robe part, but man once pointed out it is hard to miss.

I don’t mind their look. I do see the Mars Attacks resemblance. Looking at their mouths alone, I always pictures them as telepathic as opposed to actual speech because you never see their mouths open.

Vril Dox is another character I know of, but not really about. He’s part of that Brainiac/Coluan character branch that I just get confused about. Braniac was humanoid… Wait no a machine/Android, wait no a god type being in Convergence, or all of the above and it will all fit together somehow. I don’t mind really as long as the story is good.

There’s great stories in both the 1990’s iterations of R.E.B.E.L.S as well as the 2009 version, but I did really enjoy the more recent 2009 run by Tony Bedard that ran for around 27 issues, taking place in “present day.” 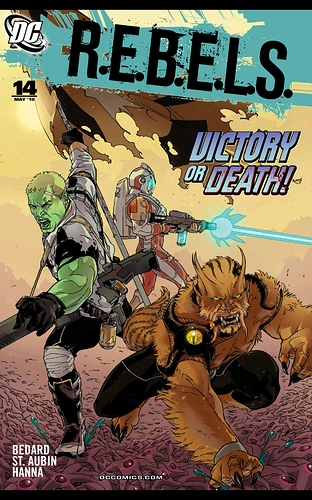 The Dominators have appeared several times in Legion stories so far. What seems to motivate them to do the bad things they do? Are they just misunderstood politically?

What seems to motivate them in most of the stories we’ve seen is mainly conquest, but not only that, conquest to propagate their species. I got the impression from these few issues that they need other species’ genetic material in order to breed their next generation/caste of Dominators. It’s a potentially interesting conflict, but sadly they seem to mostly be used as empty bad guys.

Once again the theme of the importance of good leadership comes up. Is the Legion organized well for a government-backed militia / police squad? Why or why not?

Considering that in a meta sense their elections are purely won based on how fans like them at any given time, they could be doing a lot worse! They seem to flip flop on just how deputized they are, depending on what kind of story the creators want to do.

Does issue 0 finally get Brainiac 5 right, or do you prefer other eras’ versions of Brainiac 5? Why?

It was a pretty solid entry for him. I think he’s at his best when he’s kind of being a jerk, but one who means well and is driven to fix not only the mistakes of his ancestry, but his own as well.

The last two stories again feature the new Legionnaires. Which one sticks out in your mind most after reading these issues as your favorite newbie and why is that?

I think Chemical Kid probably comes out the most interesting. Glorith could be interesting, but there’s really just not a lot about her in these issues. The Barcelona sequences were far more interesting to me.

Thanks @Jay_Kay. Sounds like we all agree that the Dominators could be a pretty good sci-fi concept in the Legion stories but one that hasn’t really been consistently or fully used yet.

In celebration of the holidays I’ll wait till early tomorrow to post the new Legion reading.

I think you are spot on about Brainiac 5. Having a slightly anti-social attitude coming from “smartest” position with a historical twist is great. I like that all the other Legion recognize it as well, but only some of them can stand up to his attitude.