For the Week 28 [Legion Fan Club] reading, we return to the very unique version of the Legion called the Legionnaires that was published from the 1990s through the very early 2000s. 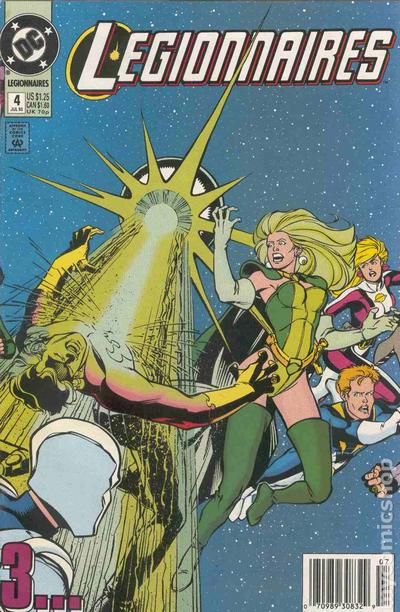 Oh, and totally in the 90’s tradition of emphasizing art, the covers of the New Fatal Five arc go together:

LEGIONNAIRES (1993-) #4 The new Emerald Empress learns that revenge is indeed sweet as she draws the Legionnaires into deadly battle. Also, Mano and the Persuader meet Mordecai…and another Emerald Empress?
https://www.dcuniverse.com/comics/book/legionnaires-1993-4/f9f50e4c-b5b5-4bc6-986e-85bf41a17bc3

Please add any other questions you want to discuss (wiki).

Next week: Crisis tie-ins: Legion just before and just after the Crisis of Infinite Earths: the Fates of Superboy and Supergirl

I breezed through these today. Here are my thoughts:

Reading:. 3.5. I read it in one sitting, and apart from not knowing some of the back story of some of the antagonists it was easy to follow.

Art: 4. I like this art style. Some of the characters looked very similar and were hard to differentiate particular when the did close ups of people’s faces.

Writing: 3 Like I said, easy to follow but a shows the age and time period it was written in.

What do you think of the New Fatal Five? How do they compare with the older version we usually see?

The Fatal Five have become favorites of mine but to be honest I like the older version better than this version. Mano and Mordecai seem really generic to me for one thing. I also didn’t really care for Thorak all that much either.

Do you like the “new” Green Empress? Why or why not?

Now this new Green Empress I liked a lot even though I still like the older one better. I remember being a teenager and having issues with my body image. I got teased just as she did by bullies so I can well understand how she feels and why she would want revenge on those who tormented her. I empathize with her.

For this arc, who was your favorite Legionnaire? Why?

Computo and Dragonmage. I liked their powers.

What would you rate the reading, art and writing, 1 to 5, 5 being the best?

@Meisaj and @JasonTodd428 glad you were both able to read through these this time around! Like you both said, I also am finding this version of the Legion ok to read with the art overall well-done.

It does reflect the whole “women as pin ups” mentality of some the early to mid 90s comics; I have been slowly inventorying what is left of my collection, and am currently doing the Malibu / Ultraverse section- oh boy, some of that is super embarassing art (Foxfire, Siren, Mantra V2, Godwheel with NecroManta). Again I say: who walks into a battlefield wearing a swimsuit or a bikini if they aren’t from Atlantis?

The other aspect of Legionnaires that I am enjoying is the sci fi aspect: the world is now a space station city (as was Babylon 5 btw). THIS brings up an idea for the months to come on our master plan for monthly reading.

See screenshot below (or go to the Master Legion Reading Tracking sheet: Legion of Super-Heroes Issues Chronology.xlsx - Google Drive ); DC was publishing both this “cloned” younger version of the Legion AT THE SAME TIME as the regular Legion comic- so, did they both take place on the same New Earth? I guess we’ll find out!

I apologize for being a club member in absence. Time just seems to get away from me.

It’s interesting you bring up a B5 comparison because I got the same vibes from the space station too.

No worries. Back when there were only 4 book clubs, I still struggled with weekly reading them, and now I just pick what looks fun each week out of the flood of clubs now. I think it’s a fun time with all this guided reading and discussion.

Do people reflect on other decades of comics the same way we all recall the 90’s?

As someone who only casually knew about the Legion in the 90’s I remember being confused by the Legion of Superheroes and Legionaries.

I’m enjoying this curated experience, I like the focus and the discussion.

@JasonTodd428 no need to apologize. Glad to see you here though.

Other than the cartoon, and appearances in other series, I never followed the Legion. This is getting me outside of my typical comics and I’m enjoying it quite a bit.

Well I missed out on the 90s era comics altogether. I had stopped reading comics by that point and didn’t start back up again until around 2005 or so. I also am new to the Legion through I did know of them so this has been outside of my wheelhouse a well.

Glad to see you here too @Meisaj.

Squeezed it in just in the nick of time!

What do you think of the New Fatal Five? How do they compare with the older version we usually see?

I think I kind of liked this version more than previous, older takes because it felt like there was more personality in these characters. I will say that I was slightly confused by the whole Emerald Empress thing at first and how there were two of them. I don’t know if that was because of the book or that I forgot details.

Do you like the “new” Green Empress? Why or why not?

Yeah – I dig the origin story and how she’s connected to the Legion. It’s a little odd that she goes from “I’m gonna make the Legion pay for making fun of my weight” to “I WILL CONQUER THE UNIVERSE MUA-HA-HA-HA” but I guess that’s the Eye talking.

For this arc, who was your favorite Legionnaire? Why?

Looking at my favorite moments, most of them tended to have Matter Eater Lad in it, which was rather surprising. I loved how his ridiculous power was still able to help save the day, like when he just chomps on the handle of The Persuader’s ax.

What would you rate the reading, art and writing, 1 to 5, 5 being the best?

I think overall I’d give this a 4. I’m really liking this series – it feels like the classic Silver Age Legion with more modern storytelling, doing the best of both worlds. Maybe they’re a little too immature, but hey, I think this was around the same time that Justice League was the “Mwa-Ha-Ha” crew, so I think they’re in good company.

The art by Chris Sprouse for #4-6 is great – bright, expressive, clean, just cartoony enough to have some comedy and light to it, but still able to do serious scenes well. But the real art highlight for me in this reading is #7 with Adam freaking Hughes on art. That was such a feast for the eyes.