[Legion Fan Club] Weekly Reader Week 30 November 13th, 2019
For this week’s Legion Fan Club reading adventure, we fly back again to the 1977, really all just before the Wedding special issue (ALL NEW COLLECTORS’ EDITION (1977-1980) #55, a previous Legion Fan Club selection), at a time when Gerry Conway of Spider-man Death of Gwen Stacy fame took the reins for a bit!
Join us please as the [Legion Fan Club] proudly presents: 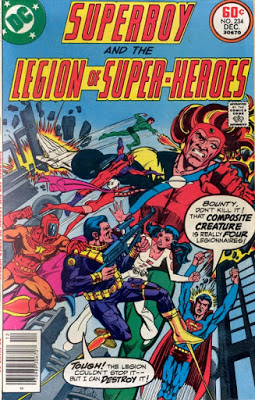 Superboy (1949-) #233
Prof. Jaxon Rugarth volunteers for a time-travel experiment at the Time Institute that drives him mad and changes him into the Infinite Man. DC Universe

Superboy (1949-) #234
Perhaps one of my favorite “bizarre 70’s” issues of Legion, written by Gerry Conway and Jay Zilber, pencils by Mike Grell, Ric Estrada …oh yeah, it’s time for The Composite Legionnaire!!! Now where have I seen this concept before 7 years prior or so?? DC Universe

Superboy (1949-) #235
Many hands here, Paul Levitz, Gerry Conway, Jay Zilber writing, Mike Grell, Win Mortimer, George Tuska drawing away: The Legion subject Superboy to a medical treatment that is really a “hypno-block” that prevents him from retaining information about an extended life serum and from wondering why his teammates age so slowly. DC Universe

Superboy (1949-) #236
Just before the giant-sized Wedding issue, Paul Levitz, Paul Kupperberg write a story about Saturn Girl and Lightning Lad entering a Sensacomp Simulator to help them clarify the choice between getting married and leave the Legion…or remaining single and staying with the team!
https://www.dcuniverse.com/comics/book/superboy-and-the-legion-of-super-heroes-1977-236/bc52ae41-3c0b-4f87-9fd0-031a2b0f1026

Questions:
We’re doing this in “wiki” format so you can put questions to consider in here. I’ll start with a couple, but please select “

Next week we’ll FINALLY jet to the very end of DC Legion story run time (until this month with the new Legion comic by Bendis) and continue to read the Legion Lost New 52 story!!

So I’ve only read is Superboy to 232 so far. I actually really enjoyed the story and the jumping around. Not sure what I’d rate it, but it was entertaining so probably at least a four.

What I did come away with was two things.

Yeah the late 70s was affected by the Revolution that was going on in culture at the time unfortunately. The thing you mentioned being uncomfortable with is one of the reasons I rotate things every week so we don’t spend two months reading from the late 70s and then having ourselves scarred emotionally for life.

Now, I haven’t read the selected books yet, but I get the feeling that when I do, ready for this onslaught of butt, I’ll be like “…That’s it?” That tends to happen to me a lot.

Also, neat idea with the wiki and adding our own questions! I just put one in, curious to see how this goes.

Maybe it wasn’t tons of but, but it definitely stood out from other comics I’ve read recently.

It made me think of Tina from Bob’s Burgers while reading that comic.

I liked this issue – I thought the plot was solid, with a unique hook (though oddly underused in this story, I thought), a good physical villain as well as some good pathos for Shrinking Violet and her homeplanet. On a rating, I think I would give this issue a 4. 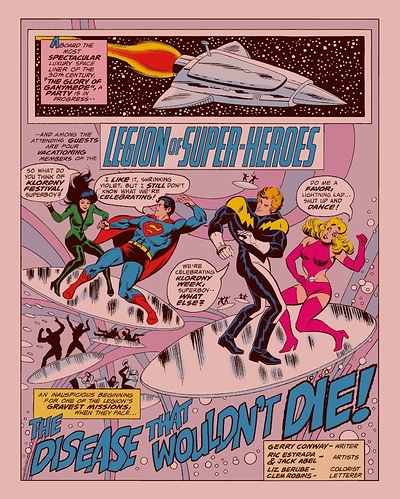 Try and show me a groovier intro to a Legion comic. Go ahead, try. 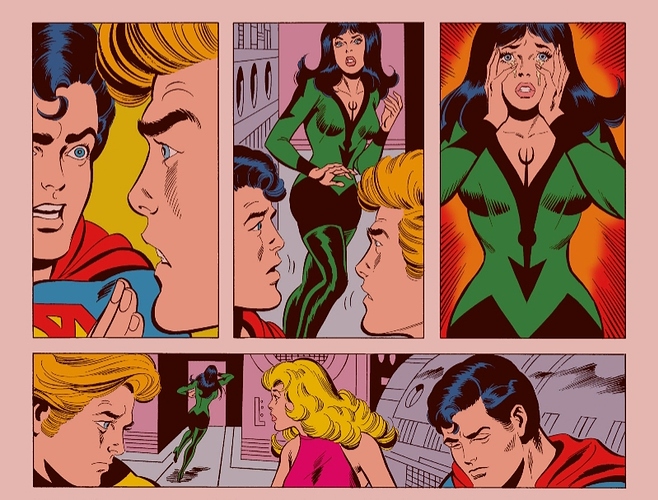 Wanted to highlight this moment because in this era of comics where it can be overloaded with word balloons, this was a beautifully rendered moment of betrayal and tragedy.

Also, because of the butt talk, I decided to keep a running count to how many gratuitous butt shots I saw. For transparencies sake, I consider “gratuitous” in this sense to be where it’s solely in or the focal point of a panel purely so the artist can draw the butt. The last one I feel is kind of a stretch, but I suppose it could be argued since there are other ways to frame this action, it could count. 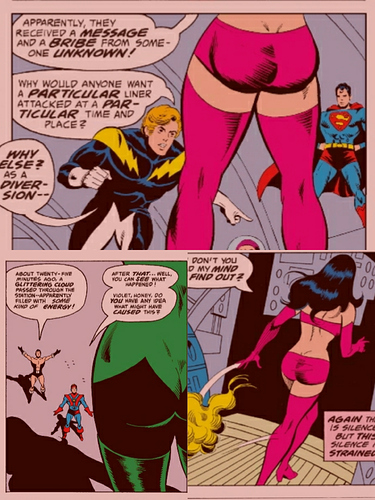 So as of one issue, the butt count is three.

Again I’ll say if you want to run into battle dressed like that, go for it …I think I’ll stick to something like the Mandalorian type outfit

What did you like about the artwork of James Sherman (with Bob Wiacek inking) in issue #233 “The Attack of the Infinite Man?” How about the Michael Netzer / Bob Layton work in the second story?

Both were pretty good. For the Infinite Man story, I really liked James Sherman’s design for the titular foe – he felt like what would happen if 60s Steve Ditko and 70s Jack Kirby had an art baby together. The second story by Michael was also pretty good, much more realistic while still keeping that superhero feel.

Superboy (1949-) #234, The Composite Legionnaire, Gerry Conway and Jay Zilber, Mike Grell mixed in for some of the art: what do you think? Does this crazy idea work for you? Why or why not?

Much like the other popular composite take in DC Comics, this one is so crazy it kind of works. The design is wild and the idea of a mindless monster with all those powers is pretty threatening.

@Jay_Kay glad you are getting a kick out of these older tales this time around. Just a few years later, Bob Layton is a big art powerhouse over on Iron Man, and later in the early 90’s with Valiant XO Manowar, Armorines etc.

"#233 and 235 introduce the all-female Sklarian Raiders that show up as common fodder for the Legion to fight. What do you think of these occurring foils – interesting, or…of it’s time? " interesting question to add to our Wiki format this time around; I felt like the female gang was trying to accomplish a couple things, like the Dragonwing story we read last week. I think they want to show what crime might look like in 30th Century with technology, a scary thought. It kind of reminds me of that recent Action run of Bendis’ where Superman is up against common street crime and being baffled. Our assumption is that the super powered people would never have a problem with street crime, that’s more of a Batman / Daredevil angle, but really it’s fun and intriguing when the opposite is considered to be true.

As far as them all being female, maybe it’s a sorority gone bad on exam week…

Just a few years later, Bob Layton is a big art powerhouse over on Iron Man, and later in the early 90’s with Valiant XO Manowar, Armorines etc.

I enjoy Layton’s Big Two work, but I’m currently enjoying his work on Armorines, which is a fun series. The more I read of Valiant, the more I really enjoy it.

@Don-El, I’ll try and read these when I have the time to really sink my visual teeth into them and appreciate their artistic flavors. Sorry to be late.

Silly me I forgot all about the Composite Superman.
… luckily I ran into him today on sale at a local comic book store 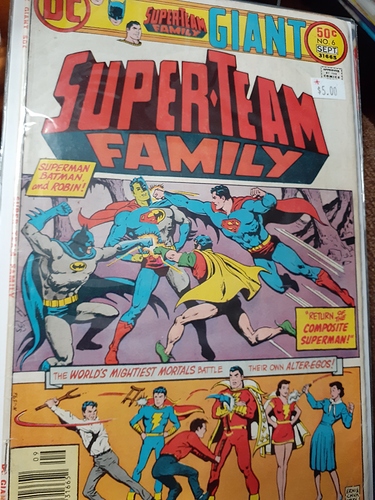 Oh wow get this in that particular issue the composite Superman has the power of many of the Legionnaires of the time!

I picked this up both because of the composite Superman but also because @MisfitH often mentions superteam family is one of their all-time favorite comics. 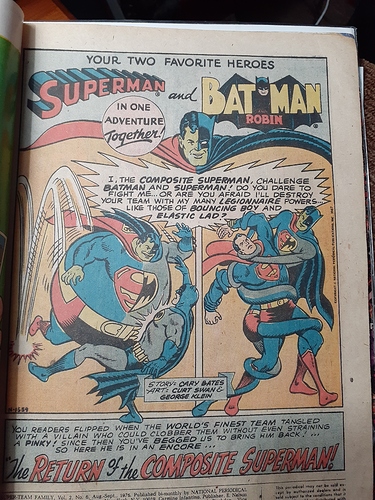