For this week’s Legion-reading, we again hope over to to 2011 just after Flashpoint near the beginning of the New 52 Levitz run (with Francis Portela on art again mostly. We’ll read 4 issues this time around from the New 52 era of the $2.99 super-thin DC comic book (note that the Legion Lost series is running at the same time, another Legion series set in present day New 52 Earth). 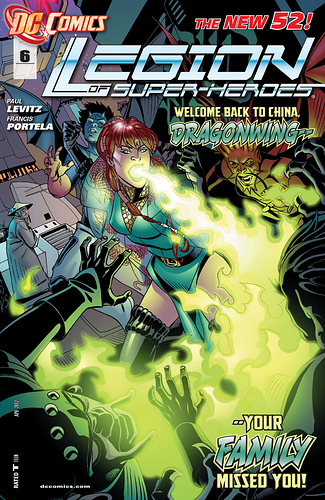 LEGION OF SUPER-HEROES (2011-) #6
New Legion recruit Dragonwing has returned to China to check in with her family! DC Universe

LEGION OF SUPER-HEROES (2011-) #8
Invisible Kid must chase down a set of thieves who’ve gotten their hands on some of the most dangerous technology in the universe—tech that could result in a new dawn for an old adversary!
https://www.dcuniverse.com/comics/book/legion-of-super-heroes-2011-8/ae4046ed-bd71-45f5-8030-67e4f9efef30

Next week: let’s work on finishing off the storylines of Legion Lost of New 52!

I’m chipping away at this one. I’ll try to finish up by tonight.

This kicks off with 4 stories in one! To focus on one, what details did you like about China in issues 6-7? Did it make sense that it sits in a sea of fire?

First off, I like that Levitz is making an effort to show more of Earth culture still being around in the 31st century, between this and Instanbul in an issue or two away. The idea of it dealing with volcanic activity like that was pretty interesting, and I liked how the people there persevered either despite or because of it.

Issue 7 has lots more focus and brings the strands of issue 6 together for the battle with Dragonwing’s sister’s rebels. Any favorite moments in the fight scenes?

Probably between Dragonwing and her sister altogether. It’s funny, with the first five issues, I thought the Legion Academy kids were all pretty much dull and not at all memorable. But after this story, I came to like Dragonwing a bit.

The other kids are still pretty pointless, though.

Issues 8-9, which groups are the best team ups here? Why?

It was nice to see the original Trinity of Lightning Lad, Cosmic Boy and Saturn Girl together again, and to have a nice time for once…well, except for Lightning Lad, being put on “punching lightning away” duty.

I also liked the interactions between Brainy and Dream Girl. I really liked the sort of uber-confident, borderline arrogant approaches they had to each other, felt like two unstoppable objects colliding a lot of the time. Lots more compelling than the standard network TV slop they’re doing with the characters in the Supergirl TV series, IMO.

Overall, is this just the right number of Legion members, or far too many to keep track of?

I think splitting the team into specific groups help to keep things simple with the different storylines, but I don’t think there’s a hard and fast formula on just how many members are right on any given page.

What intrigues me and makes me feel like I’m in the middle of some sci fi story about a guy living in two timelines at once is how Comet Queen has appeared in the '80s Giffin run of Legion we’ve been devouring once a month and then she appears here…with like no aging etc.

Brainiac 5 and Dream Girl appearing here and on Supergirl again gives me that odd disoriented feeling of alternate universe collisions. I preferred the version of the Legion two seasons ago on Supergirl when we had Mon-el and the rest with the whole “opps look what I did while I was away for several years in the future” etc. For sure, neither Brainiac 5 or Dream Girl of the current season of Supergirl are even close to the ones shown in this Levitz’s New 52 series. I enjoy the two characters on Supergirl, but for different reasons that why I like them here. Brianiac 5 on Supergirl always gives me a chuckle with his “fish out of water” routine, especially as he plays off his boss, Kara’s sister. Dream Girl on Supergirl has a lot of youthful optimism as she enters her new career etc.

Maybe we’ll watch some of those Supergirl episodes from two seasons ago for our monthly Legion Watchalongs once we are done with Season 2 of the animated series.

I just couldn’t get into either character on that show. The accent the actor for Brainy chose was just too distracting, and Dreamer…man, I wish the first out trans superhero on TV wasn’t such a bore.

I tried getting back into the show partly because of them and for the Crisis lead up, but…I just can’t man. I’d have to sit those out. 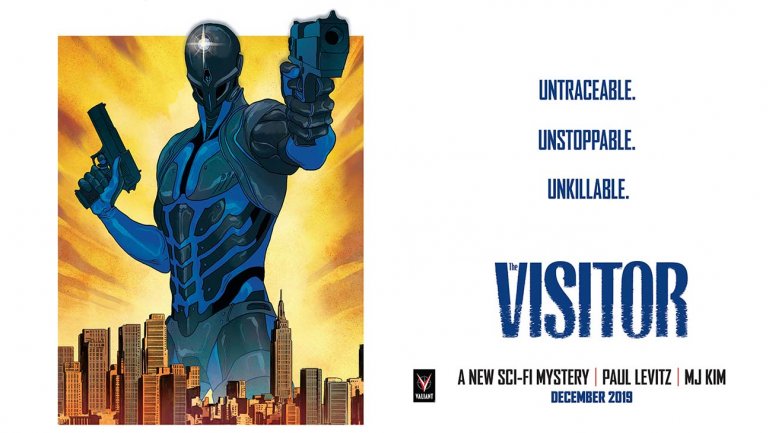 Oh yeah, I remember hearing about that! Might be interesting to check out.

I’m still cranking away on these books, but that’s neat Levitz is doing a Valiant book.

Yeah, I got a big chunk of the Valiant revival from a Humble Bundle some time back and I need to pour into those one of these days.

1. This kicks off with 4 stories in one! To focus on one, what details did you like about China in issues 6-7? Did it make sense that it sits in a sea of fire?

I liked the way it looked visually and that it sits in a sea of fire, which totally makes sense to me. There seem to be a lot of people here with powers related to fire or dragons so a sea of fire makes sense.

2. Issue 7 has lots more focus and brings the strands of issue 6 together for the battle with Dragonwing’s sister’s rebels. Any favorite moments in the fight scenes?

I’m with @Vroom on this one. Any moment Dragonwing got the upper hand was the best part for me as well. I love her character.

I also side with @Jay_Kay and @Vroom that the Legion Trinity is the best team up. They are my favorites and they work together so well.

4. Overall, is this just the right number of Legion members, or far too many to keep track of?

It was just the right number. Since all the Legion members were ID-ed every issue I did not find it all that hard to keep track of them.

Thanks for reading and sharing, @Vroom! My apologies that finishing out Legion Lost at the very end of Legion’s time with DC in New 52 slipped my mind, I’ll make a note so we zip over there on the 20th!!!

I sure hope Dragonwing shows up in the new Bendis version of Legion, @JasonTodd428 !

I honestly didn’t notice the whole “dragon” superpowers theme on this, you’re right. Between the whole area being on fire, and the various superpowered folks also having traditional “dragon” powers, that’s a great theme!