For the Week 28 [Legion Fan Club] reading, we roll out an entirely-new set of storylines, unlike anything we have read in the past 27 weeks by writers and artists we have not encountered: Introducing the Legionnaires, the version of the Legion that some of you are very familiar with from the 1990s through the very early 2000s. 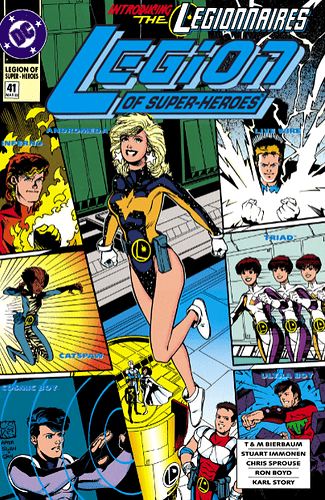 The Legion meets the Legionnaires! The historical meeting of the teenage Legionnaires and their adult counterparts paves the way for the introduction of a new series—LEGIONNAIRES #1!

Since their very discovery, there has been one question on everyone’s mind: which Legion is the real Legion, the SW6 Batch or the adult one? As both Brainiac 5s will discover, an easy question does not mean an easy answer.

From the ruins of Metropolis, a certain clubhouse is salvaged; new outfits are donned; new code-names are chosen; new members are admitted; old traditions return; and the Legionnaires are born.

The Legionnaires gain the upper hand in their battle with the deadly Mano without realizing that the real battle is yet to come.

The battle in the sewers beneath Metropolis intensifies as the hulking, monstrous Mordecai injures one of the Legionnaires and captures another.

Questions to ponder (spoiler alerts, we suggest reading the comics first before reviewing these questions):

In general, how would you rate this very unique Legionnaires version of the Legion compared to other Legion versions we’ve read so far, 1-5, 5 being the best? Why?

How do you feel about this younger Legion and the style of the art and writing for this iteration? What do you like best?

Which of these “new” Legionnaires do you like the best so far in the story? Why?

New Earth is a whole new setting. Do you like the concept and the look of it in the various settings this issue? Why or why not (compared to the future Earth of other Legion versions).

The Legionnaires’ costumes are pretty much all revamped and redesigned. Which characters have a better style and look now compared to the uniforms their counterparts were wearing in the early 1980s Levitz / Giffen run? Which costumes just don’t work for you on this team?

Do you like the drama and team dynamic of this much-younger version of Legion? Why or why not?

Next week: Back to the future! More of LEGION OF SUPER-HEROES (2011-) plus our monthly first Wednesday of the month evening Legion Watch a Long!

Nice! I’ve always been interested in this period of Legion ever since I read a bit of the initial Five Years Later arc. Looking forward to seeing more of this period.

hey how do you join

I wanna see more too

Look under Clubs here in Community Events. The recruit link is there! Love to have you sign up!!!

Welcome to the Legion Fan Club! [Legion%20Flair] Every week on Wednesdays late morning / early afternoon we post the Legion of Super-heroes reading from the DC Universe Digital Comics Library. Also, the first Wednesday of every month we also do a Legion of Super-Heroes Animated Series Watch a long. We will also have a virtual Clubhouse (a group message) where we can discuss “live” any Legion news since they now have a regular DC Comic series again after 6 years of no new comics! By joining …

Love this run ! Have it all as I collected monthly comics when it was originally published .

This period of Legion is one I’ve dabbled in here and there, and these issues are new to me. They look like a hoot!

Welcome aboard the Legionnaire’s Train…it floats

Just started the second issue. One thing I want to say right now is that Jacques/Invisible Kid with a mullet was…a decision. Honestly didn’t recognize him at first, even with the white streak.

That’s something I think is going to plague me with this era of the books – everyone calling each other their real names makes sense in how they would realistically interact with each other, but man am I getting mixed up in who everyone is. I think I prefer how they’ve done it in more recent years, with little boxes in each issue telling you who the character is, their real name, planet, and power set. There’s so many Legionnaires I imagine even the most die-hard fan might get tripped up sometimes.

Last day for this particular selection if anyone has any reflections to share.

In other news, I finally have access to all the main Legion that has been published I believe. The basic formula is: purchase the five volumes of black and white Showcase Presents. Grab a copy of Superboy and the Legion of Super-Heroes 221 which is only like 2 bucks. The rest is here on DCU Library as far as I can see! 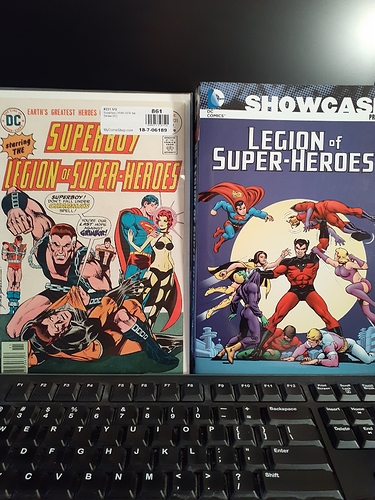 Just finished this run – overall I dug it, definitely an interesting new direction to take with some stellar art both on the LSH side and the Legionnaires side.

Wow, Universo returns, this time as kind of a good guy? Is this version the best you’ve seen so far of the guy? Why or why not?

Well, considering that the last time I read him was as a one-dimensional bland supervillain in the Shooter era, it kind of is by default. It seems like they’re setting him up as a possible political rival to Jaques, and unless I’ve forgotten, he didn’t seem to have any evil intent as of yet, so I am definitely curious to see where that goes.

How do you feel about this younger Legion and the style of the art and writing for this iteration? What do you like best?

I like them in that it is an interesting way to solve a conundrum with this era of Legion, the key issue being, they’re just not teen heroes anymore. They’ve grown up, they’re all battle-scarred war heroes. That original spark of combined teenaged optimism and rebellion is really no longer there.

So what do they do? Send in younger, cloned versions of the Legion. Now you can continue the stories of the Adult Legion, and still do stories about the young, teenaged heroes.

If I can find a flaw in how they handled it here, I think it’s that the clones adhere too closely to the original Legion dynamics. Maybe that does become the case later on, but I think it would be more interesting if there were more differences within this Legion.

Here’s a good example of something similar – when Marvel brought the Original 5 X-Men in the modern-day during the All-New X-Men run, they weren’t just the original team as they were at that time. You saw Jean Grey gain the full extent of her powers earlier, you had Angel gain cosmic-powered wings, Beast started studying magic, Iceman came out of the closet and Cyclops had pirate adventures with his dad and made out with X-23. Crazy things! Meanwhile, in this Legion, the only real difference is the addition of some Cosmic Boy, Live Wire and Saturn Girl dynamic that just, ironically, feels like a rehash of the Cyclops, Wolverine and Jean Grey one.

Which of these “new” Legionnaires do you like the best so far in the story? Why?

I don’t know if there’s a character here I like the best right now. I guess the closest is that it’s neat to see some sort of version of Ferro Lad who lasts long enough in the Legion to have some sort of personality other than “the dead one.”

I can tell you which one I hate the most right now, and that’s Sun Boy. Oh Grife, what a dick. Not only is he just an egotistical, misogynistic ass, but it looks like he caused the creation of one of the Legion’s greatest villains. I legitimately might cheer if this new Emerald Empress kills him.

New Earth is a whole new setting. Do you like the concept and the look of it in the various settings this issue? Why or why not (compared to the future Earth of other Legion versions).

I really dig the idea of New Earth – it definitely really sells the whole future concept of this universe, and I think it gives these heroes a unique hook that other teams in the DCU really don’t have. It’s like a prototype of Syfy’s Battlestar Galactica. Definitely curious to see what they do with that part, considering that it looks like we’re going to get something similar with the upcoming Bendis run.

The Legionnaires’ costumes are pretty much all revamped and redesigned. Which characters have a better style and look now compared to the uniforms their counterparts were wearing in the early 1980s Levitz / Giffen run? Which costumes just don’t work for you on this team?

I don’t know if I’d say better – I think the Legionnaires’ look are definitely a good balance of reverential to the past but still being updated for modern times. Though part of me wonders just what do they put in all their pouches. Snacks? I’m gonna go with snacks.

Do you like the drama and team dynamic of this much-younger version of Legion? Why or why not?

Kind of already answered that in the beginning, but I guess to sum it up, I like it in theory, but I would prefer if the creative team was bolder in creating different dynamics other than “it’s the same Legion, just in different costumes!”

Thanks @Jay_Kay ! We’ll see how this storyline unfolds in the coming months. I have liked other storylines by the Bierbaum’s (and I’ll have to do a search later to see what else they did in the later years).

On a separate note, anyone know when Comixology posts this week’s new comics? Gotta check out that new Legion comic today!!!

It’s up right now, already read the first issue of the new Legion.

The first web reviews of this new Legion run by Bendis are full of praise and high ratings. Guess I better read these between work meetings etc today before I see a spoiler!!