For our Week 21 [Legion Fan Club] Weekly Reader, we join Paul Levitz and Keith Giffen just AFTER the Great Darkness Saga, circa late 1982:
The Legion Club presents: Life After Darkseid!

THE LEGION OF SUPER-HEROES (1980-) #295 DC Universe
Blok and Timber Wolf review the files of an early Legion adventure where they encountered the Green Lantern Corps and the Guardians of the Universe (this is not a reprint, but for sure a “fill in” story)

THE LEGION OF SUPER-HEROES (1980-) #296 DC Universe
After battling Darkseid, the Legionnaires must adjust to their normal lives.

THE LEGION OF SUPER-HEROES (1980-) #297 DC Universe
After Cosmic Boy’s mother dies from injuries sustained in a bombing, he goes after the men responsible.

THE LEGION OF SUPER-HEROES (1980-) #298 DC Universe
Kharlak the Khund returns to challenge a Legion team who are investigating a murder on a mining asteroid. (and don’t miss the Amethyst preview at the end, I’m surprised it’s in here)

THE LEGION OF SUPER-HEROES (1980-) #299 DC Universe
While Kharlak continues to battle the Legion team, Wildfire and Invisible Kid have vanished into noher plane of existence.

Questions to ponder and discuss: 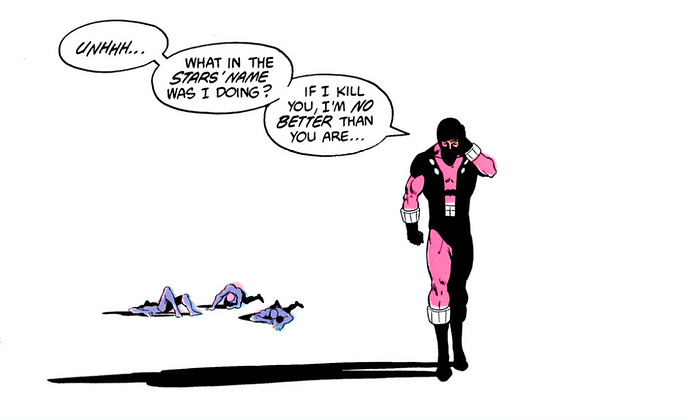 What do YOU do the day after Doomsday?

Depending on if I have work again the day after I guess I just keep going and hope I don’t lose my mind from hearing Mariah Carey Christmas Songs all day.

Just finished these up, and some pretty good stuff. I like how they deliberately slowed things down and told more smaller, personal stories after the huge blockbuster that was The Great Darkness Saga. In these long-form runs like this, you kind of need a mix of both to make the big events bigger.

On one hand, I’d love to see that, if only because I like me the GLC. On the other, it does kind of feel like the GLC and the Legion would step on each other’s foot a lot. It’s also odd that they’re basically around but don’t go into UP space here, but by the time Levitz writes them in '10, it looks more like they were completely wiped out at some point. Either there’s some other event we haven’t seen, or Levitz did change some things up when he did the Retroboot.

“Rate Giffen’s design of the various alien species in #296, ‘What do you Do the Day after Doomsday?’ What is it about them you really like or really dislike?”

They feel properly strange and alien, very few if any Star Trek-esque “regular dudes and dudettes with head ridges” among them – which is good because when you think about it, we got way to many human lookalike aliens in the Legion itself already.

“Did the deep dive into Cosmic Boy’s grief over his family seem realistic in issue #297, or way over the top? Why?”

I mean, it’s always going to be over the top because when we lose family to such a horrific tragedy, none of us break into prison and attempt to kill those responsible…TWICE. I think a better way to say it would be to say it’s not overwrought or terribly cheesy.

I also think it was good for Cosmic Boy’s character because in a way I think he’s always been approached as the Cyclops of the crew – the natural leader, and takes his job very seriously. The fun monitor. These issues really highlight just how powerful and threatening he could be if he let loose.

“With Issues #298-299, the concept of running three strong Legion stories at once per issue really takes off. How would you rate this era of Legion stories compared to the earlier Jim Shooter run or the 2010 Levitz’s ‘Earth Man’ run?”

Better here than in both. It allowed everyone to have their moments to shine. I especially liked the stuff with team led by Wildfire and Dawnstar, especially when Invisible Kid went into the…Invisible dimension with the past Invisible Kid having gone coo-coo for coco puffs.

“Last question this time, honest: which of these 5 issues was the best experience to read?”

I don’t know if I have a set “this one is my favorite.” I think I really started getting into it with the last three issues.

Also, something funny, when Wildfire was complaining about how Dream Girl is setting up the teams, I was reminded of this little comic fan script I saw earlier today. It’s the X-Men, but I think it definitely could work here. 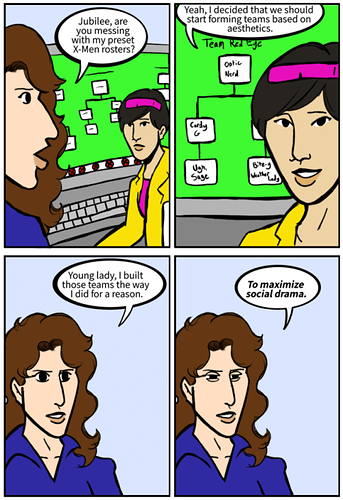 Jay_Kay I also found that this post Darkness Saga run starts the best creative chemistry of the Levitz / Giffen team. A few years later Giffen again demonstrates his gift for helping other writers propel to new heights with the DeMatteis JL writing teamup.

I’m curious to see how long this writing partnership stays strong as we read through these in the coming months; it’s been many decades since I laid eyes on these!

Still some time left before we start the next Legion reading. Anybody else care to take a peek at this particular run before we warm up the time bubble tomorrow and go forward a decade or two?