Welcome to another very special session of the [Legion Fan Club] as we continue to celebrate a wonderful and rare event: the 2022 Justice League vs the Legion of Super-Heroes appeared again in the DC Universe Infinite Library (as part of the digital subscription service), issue #2!

JUSTICE LEAGUE VS. THE LEGION OF SUPER-HEROES #2 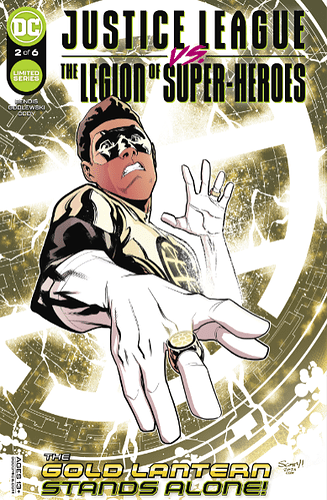 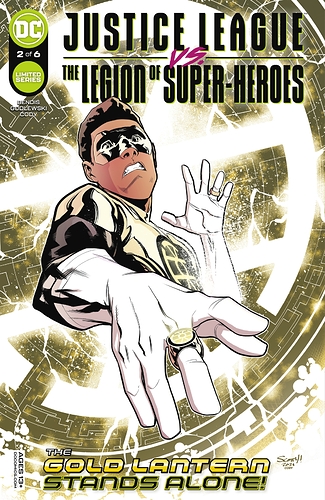 Justice League vs. The Legion of Super-Heroes #2

Whether you read this when it came out in January new, or are going to read it for the first time this month as part of your DC Universe Infinite membership, please join in the discussion below.

• How is the plot moving along this issue for you?
• Is Gold Lantern acting like a hero or villain in this issue?
• Do you have any favorite scenes / panels from this issue? If so, post them below please!

Not a Legion Fan Club member yet? Crave a nifty gold ring for your icon? To join and get in on other discussions, our private Discord channel and our archives, click here: Legion Fan Club!

• How is the plot moving along this issue for you?
I like the plot so far and like how it mixes enough character interaction with moving the action of the story forward. Members of both teams seem in character, and no one gets too much of a spotlight beyond Gold Lantern.

• Is Gold Lantern acting like a hero or villain in this issue?
I think he’s a hero. He’s definitely in the “new hero learning his job while facing massive, galactic threats” phase of his development.

• Do you have any favorite scenes / panels from this issue? If so, post them below please!
There are a lot of panels quite liked as I thought they successfully evoked the spirit of the Legion, but this was my favorite. Diana says it all. 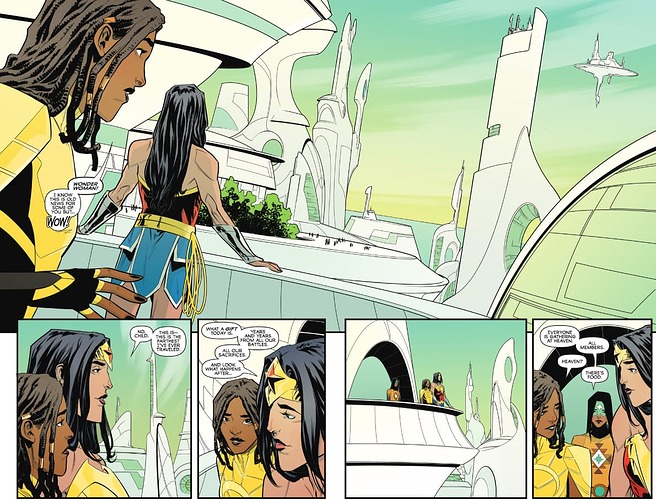 The other anthem of the Legion of the Bendis era in the panels you posted, “there’s food.”

Yes, that resonated with me, too!

New Dawnstar look is pretty cool!!? I’m a fan of her original costume tho. But, she still looks sweet!! I like the content so far. There’s little easter egg rewards for LOSH fanatics!!

Yikes, my notifications were not working properly! (Maybe my sister changed my settings by mistake? :“”)) But anyway, I fixed them and saw this, so I’m late to the party T.T

Anyway, thanks for posting @Don-El ! Looking forward to next month’s reading

Thanks for stopping by, faithful Legion Fan!!

We learn about the Gold Lantern during the first 12 issue Legion series that Mr. Bendis did a couple years back. You should totally check that series out!

Once you do, we’d also love to see your version of the Gold Lantern!!!

I believe we have readings for each issue you can use if you like.

I love both Legion Losts. Everyone said make sure u read the older volume. The new one is terrible… So, I instantly read the new one in a reading order lol. It’s great??? Ties so many things together. Both of em do? I love Kid Quantam in the newer volume. I just posted a pic of her from JSA #51. I just snagged it lol… 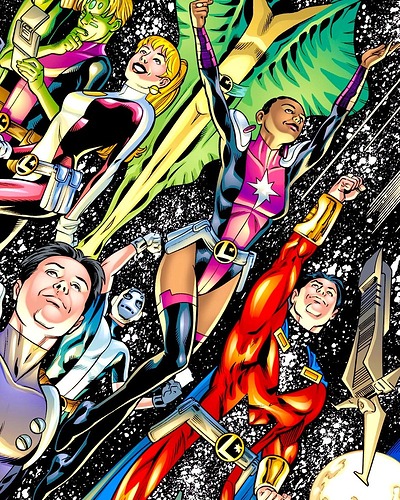 Me too! I didn’t know people said that, though? I liked them both, and Vol 2 had my boy Tellus in it, so I enjoyed it lol
I think it’s a nice way to split up such a huge team and have a focus on smaller groups at least xD Kid Quantummm I liked when she was leading the team in the 2001 run, they should bring her back :“”")

• How is the plot moving along this issue for you?

Well enough, I suppose. There’s a little movement in the Darkness development, but I think this issue focuses more on Gold Lantern and his story.

• Is Gold Lantern acting like a hero or villain in this issue?

Definitely hero. Honestly, all this asking whether he’s acting like a hero is making me think I should be looking for some betrayal or something down the line.

• Do you have any favorite scenes / panels from this issue? If so, post them below please!

I liked the scene posted earlier about Naomi and Wonder Woman’s reaction to the 31st century. I think one thing Bendis does really well is sell the hope and inspirational aspect of what the Legion means. I remember in an early issue when Jon is talking to Damian about whether Jon should join the Legion, Damian remarks about how good it is to hear that there is a future.

I think in the world we see today, sometimes it can be really, really hard to see hope in the future, that we’re on the cusp of a doomed world. I think what Bendis’ Legion shows off very well is the idea that while there are always going to be struggles, and disasters, but humanity/society/life will always live on. For us, that’s comforting, and I’m sure for people who constantly fight to save the world like the League do, it’s tremendously more so.

Well it’s actually DC / Bendis’ fault that I keep asking whether Gold Lantern is acting like a hero or villain; note what it says in the link description from DC, “Who is the Gold Lantern? And what does his power source have to do with the Great Darkness? Is the Gold Lantern everything it promises to be?”

Personally I’m a fan of having a Gold Lantern in the Legion. I think the concept and costume are cool.

I would also be okay if they kept the mystery of the new OA, or whatever it is behind the Gold Ring, mysterious for a couple years.

Yes!!! Exactly. Luckily, I know better then to trust reviews. Cuz if I did I would’ve never read that based off how bad people were hating on it? It’s great!!! Tons of amazing characters. Basically in space floating the whole time & it’s still incredible imho….sorry for the delayed response. I’ve been making my rounds lol. But, I have a medical deal & today was 1st day I was able to even read lol. I’ll be fine tho. Just wanted to let u know I’d never ignore u. Ty tho. I knew it couldn’t be just me that was thinking…? Not only is this not terrible, it’s great!!!

Yeaa, it’s nice to know what other people think before you read something but the best reviews have to back it up with evidence imo xD (Though I guess if you don’t like spoilers then maybe those aren’t the best reviews haha)
Oh, no worries about replying late! I usually don’t even notice because I talk on too many threads at once haha Plus, I reply late all the time anyway, so I def don’t get mad when other people do it

I hope you feel better soon!!

Ty buddy!!! I’m huge anti-spoilers for the exact reason u were hinting at. If it’s a good review I expect too much & it can’t reach the hype. Bad review & I go in with a negative attitude to start. Makes it tough when you’re expecting it to be as bad as people are saying. I look at nothing & go in fresh. It was just unavoidable b/c I was laying out a reading order-& it included the 1st one. Then it said in parentheses (make sure it’s this one cuz the other ones not only the wrong one, it’s awful). Then everyone on there was like yeah don’t read it. So I read it right away & then went back to that order. I was thinking? That was great!!! I’m so glad I didn’t avoid it. But, that’s why I’m so anti-spoilers. The last big reason is, I’ve been to movies when I did watch trailers & they were the only good parts. So, I was like, I’m going in fresh every time so I can at least enjoy some parts lol.