[Legion Fan Club] and Legion of Super-hero Fanatics of all ages and sizes, if you can’t get enough of Mordru evil magic and thrill to 20th century bad guys showing up in the 31st century as well, then THIS is YOUR MONTH, Bucko!!! Spring hope is definitely in the air (in spite of 1989 K Giffen hanging around lol) as we continue to take a double-sample of the LEGION OF SUPER-HEROES 2019 Bendis series along with stops at 3 or 4 other Legion eras from 1980 on. 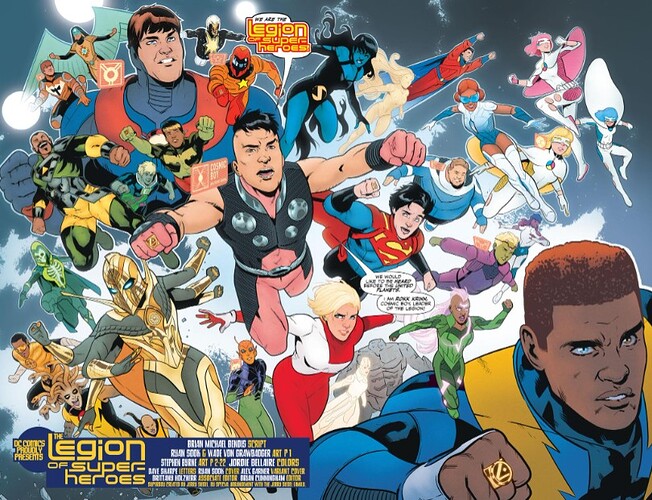 Not a Legion Fan Club member yet? Crave a nifty gold ring for your icon? To join and get in on other discussions and our archives, click here: DC Community

LEGION OF SUPER-HEROES (2019-)!!! A double shot again this month thanks to the “time shift” here on DC Universe Infinite!! 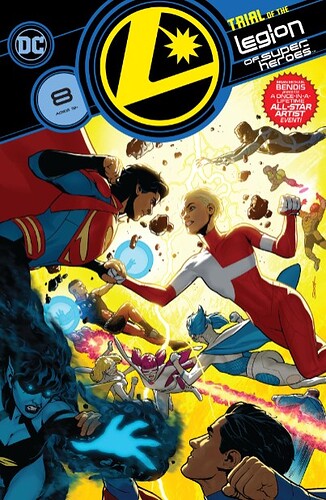 LEGION OF SUPER-HEROES (2019-) #8 (August 2020) Click here for Legion of Super-Heroes (2019) 8 Beginning a special two-part comics storytelling event! Over the course of two spectacular issues, 44 artists will dive in! 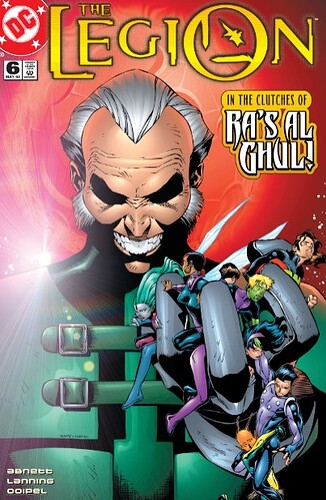 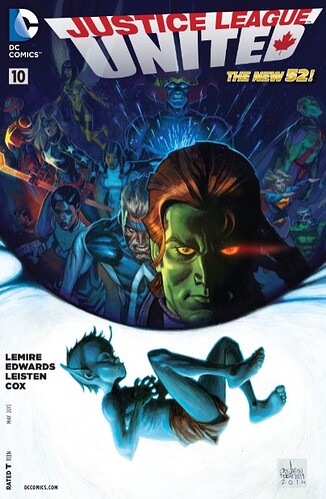 JUSTICE LEAGUE UNITED (2014-) #10 Click here for JLU (2014) 10 “The Infinitus Saga” concludes as the combined might of the JLU, the Legion of Super-Heroes, the Rannian War Fleet, and the Thanagarians learn the true meaning of sacrifice. Jeff Lemire writer

LEGION OF SUPER-HEROES (1989-) #6 Click here for LoSH (1989) 6 On Tharn, the seat of Mordru’s power, the newly re-formed Legion arrives to attempt to rescue one of their own. Not good, not good…. Mary and Tom Bierbaum, Mr. Giffen presiding….nothing can go wrong, go wrong, go wrong…. 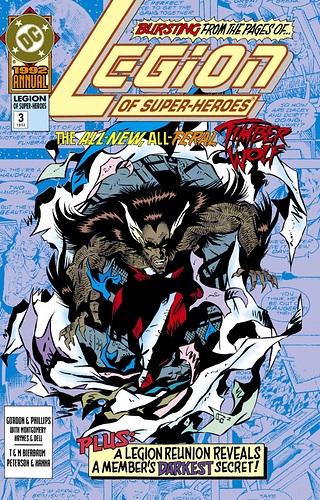 **LEGION OF SUPER-HEROES (1989-) Annual #3 DC UNIVERSE INFINITE
TimberWolf breaks out, and ends up in the 20th century (and gets his own mini-series!) 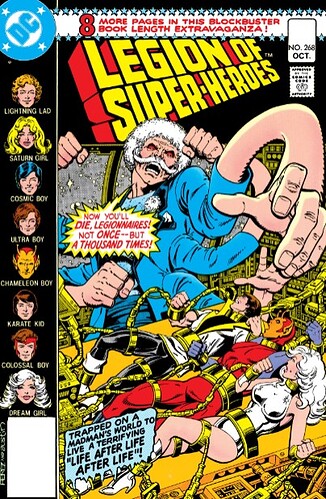 As always, please post your favorite panels / covers or quotes from these 4 eras of Legion!

Next month, we’ll plan to conclude our club’s 2 year run and look forward to Year 3 starting up the following month!!!

Wait, do I have that right? 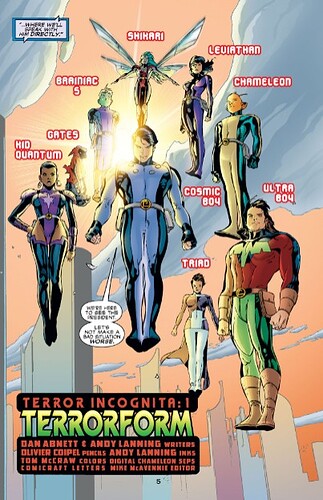 I’d go to that convention!

I started my rereads with LOSH #268.
Wrong place, wrong time, for Karate Kid, Dream Girl, & Cham.
Dr. Mayavale was just chilling until they accidentally approached his “ space subway car?”. I love all of the LOSH characters. But, this issue was Dream Girl’s redemption of a sort. I will always get excited when a Yeti or Hairy Man is involved. My panels start right with the cover.
I liked the Caesar bit & Val was Brutus. Huge fan of the Fatal Five!!! So, I appreciated the cliffhanger ending.
I believe that covers all the panels I chose. A lot of Dream Girl overcoming her own obstacles, & disproving she’s worthless, as is mentioned in the storyline. I think Dr. Mayavale is like a mash up of The Collector, & Mordru. He has a passion for historic (in their times at least, our everyday objects become treasures. Even R.J. is big time into it) items- & like Mordru, he’s like a locust. Only appearing after he has every advantage possible. Mordru didn’t have a choice tho (buried alive). Anyways, here’s my panels & I hope they match up to what my thoughts were… 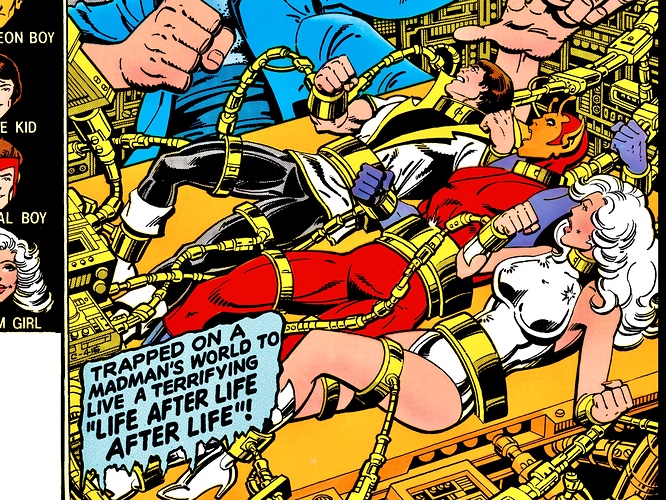 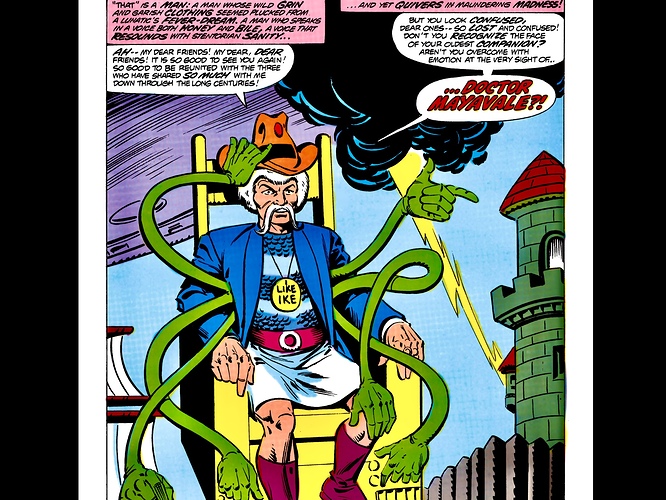 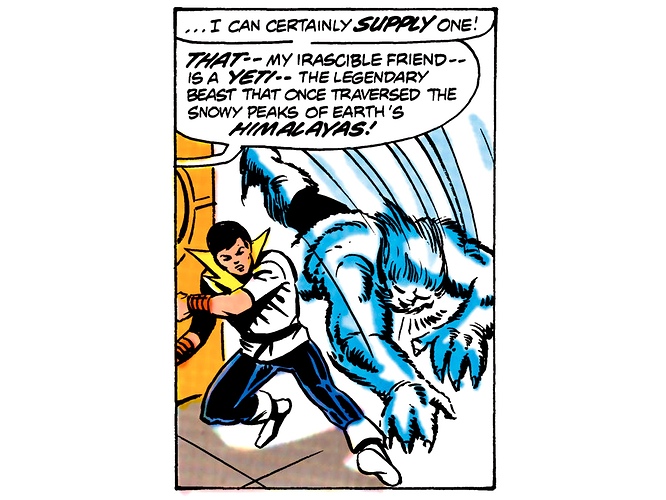 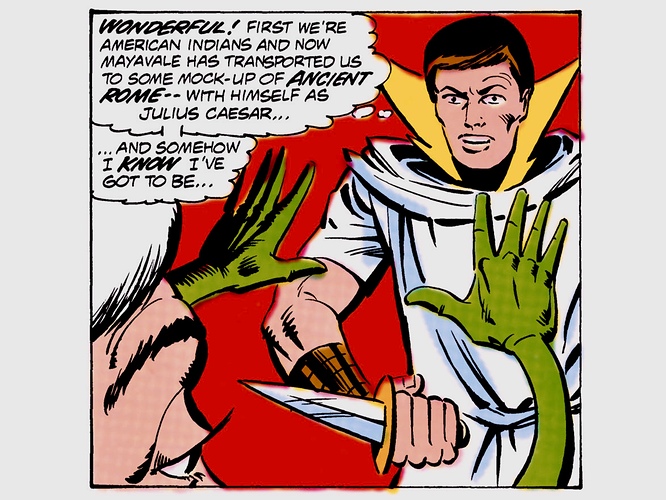 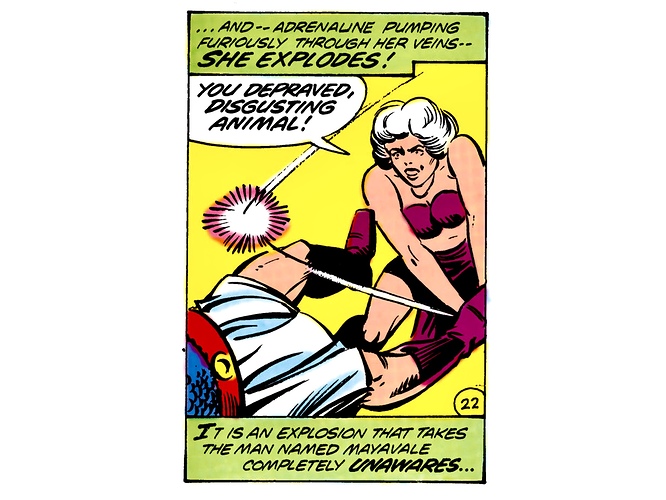 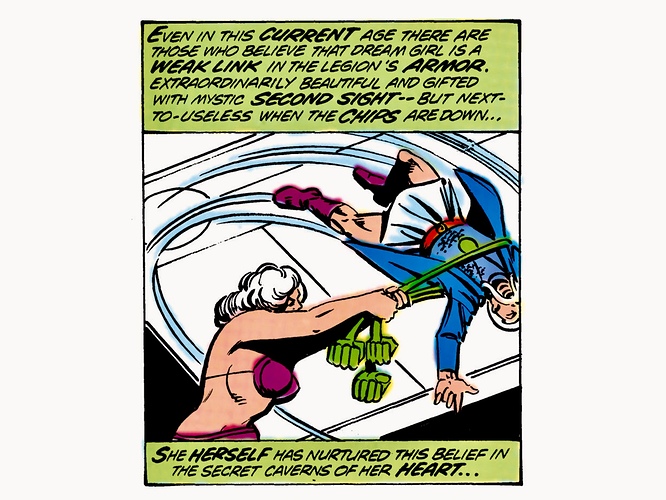 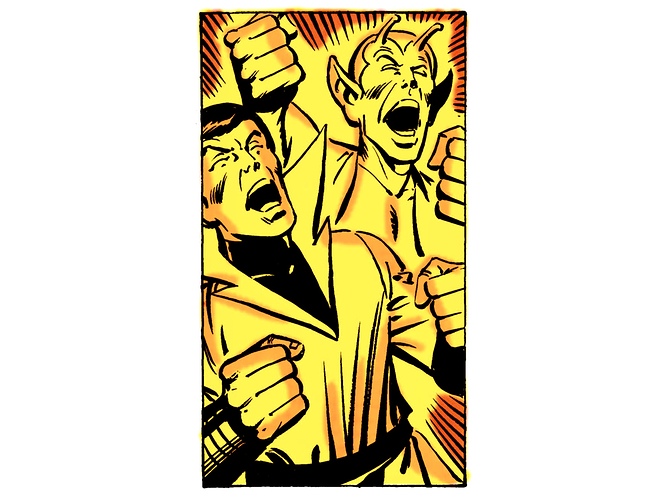 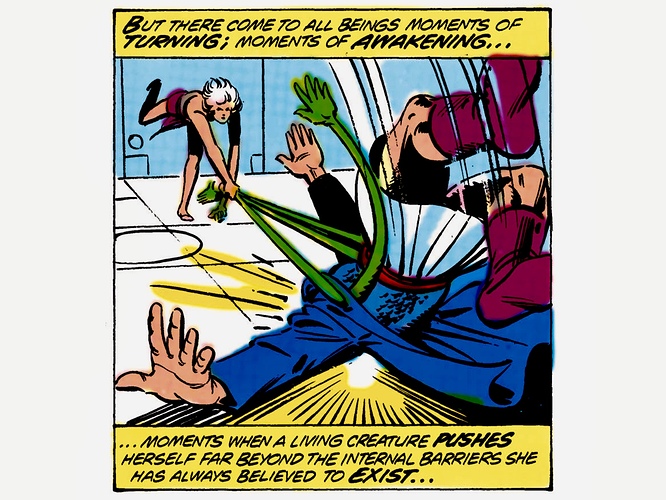 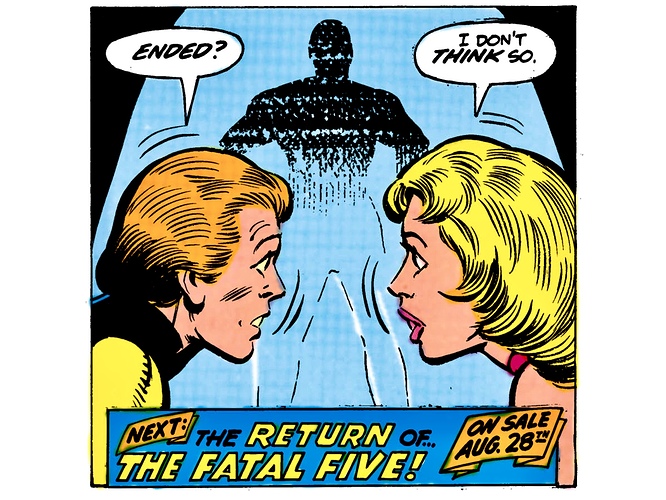 I agree, I would even say it’s inspirational watching what Dream Girl walks through here.

This is definitely classic Steve Ditko too.

The villain of this piece also reminds me of a Marvel character called the Stranger who first appeared in the X-Men back in the 60s with the big white mustache and super tall.

I thought the I Like Ike pin was funny. He’s a good villain. I may be wrong? But I think I read a crossover reading Superboy, Young Justice & the Legion vs. the collector. I know Superboy & YJ did. I believe the Legion fought the Collector for the same object SB & YJ did? It might’ve been separate as far as the Legion. I’m too lazy to Google it lol.

Yeah for some reason I’m not finding a villain called The Collector for the Legion.

There was that New 52 awful guy that Titans / Superboy / Legion Lost fought, Harvest.

Yeah I just checked. There’s a Collector from 1950, couldn’t find any info of LOSH involvement. Than, of course, The Collector of Worlds, Brainiac spawn basically. He did fight Superboy. But I think they meant in YJ TAS. Wasn’t clear. I remember the LOSH going to a room to retrieve (I’m almost positive) the phantom zone projector. From a guy who collected old twentieth century objects. They needed it to free Mon-EI (phantom zone) think it was Supergirl & the LOSH. It might’ve been Superboy & the LOSH. Anyways, I remember them being in a room surrounded by stuff from our time period. I swore they referred to him as the collector, but I’m lost lol. I’m sure it was another villain & maybe they just referred to him generally as the Collector? I’m probably mixing comics together & hurting your head as much as mine haha. I’m sure I’ll read it again someday & figure it out?

I love it actually, thanks for sharing this kind of trippy visionary remembrance. This will be another fun scavenger hunt for us! Time to put on the literary hard hat and dig in because I do remember as well as story that had a room of things like Phantom Zone projector. Possibly was on the recent Bendis run or maybe it was on the animated series from 2007.

I’ll rummage through the Supergirl & Legion stuff here too.

Any other Legion Fan Club members have an idea on this one for us? @kevin_oyer.50320
@Meisaj @Jay_Kay @Vroom

Too funny, when I do a search in Google it immediately takes me to the Supergirl episodes of the recent past involving the Legion of Super-heroes showing up.

Believe it or not, I’d kind of forgotten that the Brainiac character on the current Supergirl show was from the future, my bad.

I can strap on my Idea Hat™, but…I’m out of the loop on the conversation. What exactly would you like an idea for?

goes to look for his Idea Hat™, which was free with three books of Green Stamps

In a nutshell if there was ever a villain that went by the name “Collector” or did collecting type stuff as he fought the legion.

Offhand, there’s the guy from STAS in the “The Main Man” two-parter that collected the last members of otherwise extinct species.

Could that count to some degree?

If nothing else, you could check in with @HubCityQuestion.

Oh not that collector haha. Now there’s 3 I’d forgotten about that while I was trying to figure this out. I just watched the 1st 5 eps of the digitally enhanced HD S TAS last night. Yeah Lobo goes after Supes & collector turns on him- cuz his thing is last of the species. So he couldn’t resist getting a Czarnian & a
Krytononian. Wow, Krypton has a ton of uses, the planet. Plus the terra firma on that planet, plus the only thing that can kill them? Wow, I never realized how heavily versatile that word is. It’s like George Carlin with the F word bit. The new HD Supes looks amazing @Vroom . So that’s another collector I forgot about. I was thinking the Time Trapper but it wasn’t him.

U bet. It’s driving me crazy. There’s been 3-4 versions of Mon-el or as Valor getting sent to the phantom zone. But, I know Superboy was there in this one.

I think you might be talking (earlier) about the Scavenger, rather than the Collector. He was in a 1995 story (a crossover story arc) called “Future Tense” that started in Superboy’s comic (Superboy #21) and went through Legion of Super-Heroes #74 and concluded in Legionnaires #31 with Valor being returned from the “Stasis Zone”. He’d later be named M’onel. The Scavenger had “collected” many past super-heroes artifacts over the thousand of years he had lived, and lived in a cave.
[I guess his Mom’s Basement wasn’t available]. 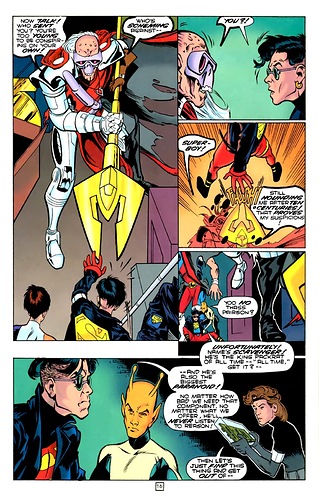