Dear [Legion Fan Club], the time has finally arrived! You have passed your exams with flying colors and are now ready to take on one of the most exciting and intriguing stories perhaps in all of the many decades of Legion legend: this very day, we take you to:

Final Crisis: Legion Of Three Worlds (2008-) #1-5
Geoff Johns / George Perez!!! Superboy-Prime and the Legion of Super-Villains engage in an all-out war with the Legions of Three Worlds! 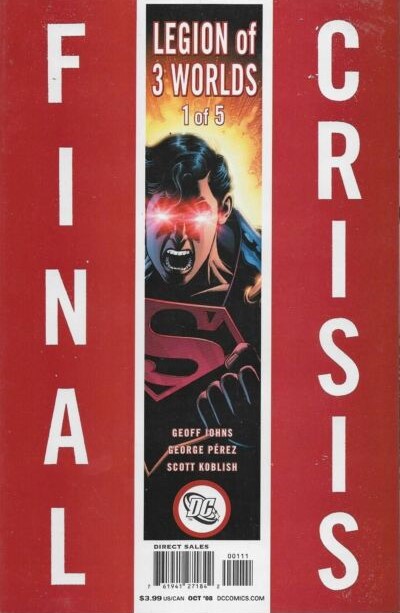 The Time Trapper constantly tries to erase Superman’s legacy from the universe, but the Legion of Super-Heroes has always been there to stop him. This time, though, the Time Trapper has found the ultimate weapon to carry out his plan: the insanely powerful Superboy-Prime! I gotta say, I do not like this guy, he has issues, that’s all I’m saying….

Don’t forget to check on your health plan as you dare to dive into these action-packed, pulse-pounding adventures! Warning: not everyone survives (if you don’t know who Superboy-Prime is, you soon will and you won’t ever ever forget him for all the wrong reasons)! 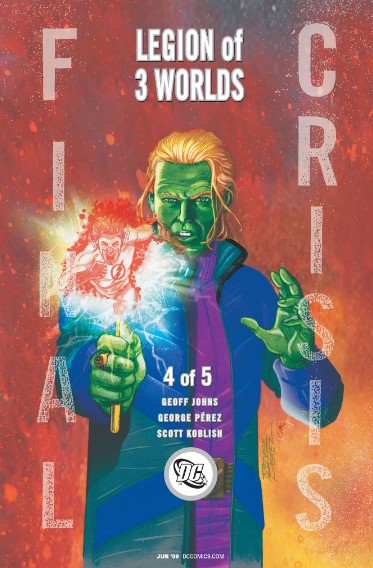 All three Legions are here – the 2008 Legion considered as stories from Earth-Prime, the Zero Hour Legion shunted to a parallel Earth though remembered through the remaining speedster XS, and the classic Legion as the new continuity for DC.

Read, enjoy, and let us know your thoughts on the beginning, middle and end.

If you read this when it first came out, let us know what you thought about it at the time and how you view it now in 2020!

That’s right, Superboy-Prime: you caused enough trouble in the last Crisis, so we’re relegating you to the spin-off book for Final Crisis.

I recall liking this series when it came out.

I had no idea who just about any of the characters were, since I didn’t closely follow the Legion, but liked the idea of it and of a Johns/Perez collaboration.

Also, loved all of the covers for this series.

At the time, I saw it as part of the bigger Final Crisis storyline that I was spending way way too much money on, but I’ve always been a sucker for short-term big idea storylines.

Issue #1, and George Perez / Geoff Johns are on FIRE for 37 glorious pages (the originals were printed on glossy heavy paper in vibrant color as I recall)…! I mean, Johns / Perez were on fire, cough cough…

Some memorable or highly-amusing scenes for me (please share some of your own): WARNING MAY CONTAIN SPOILERS) 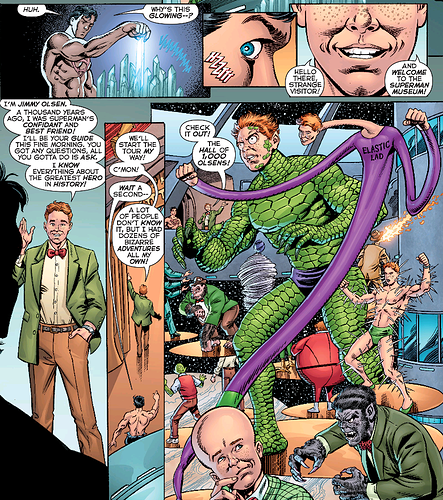 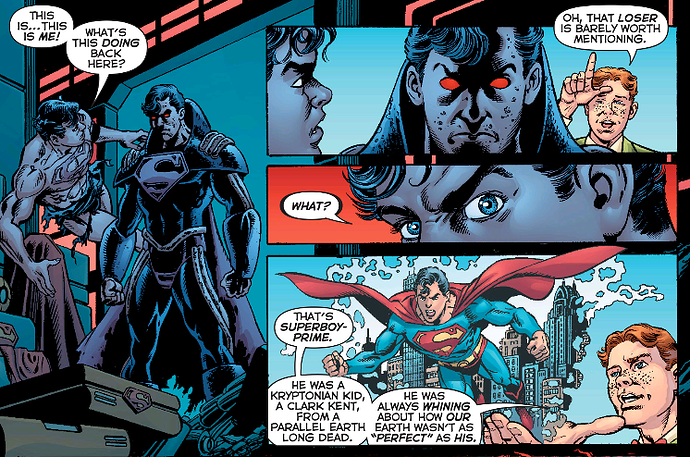 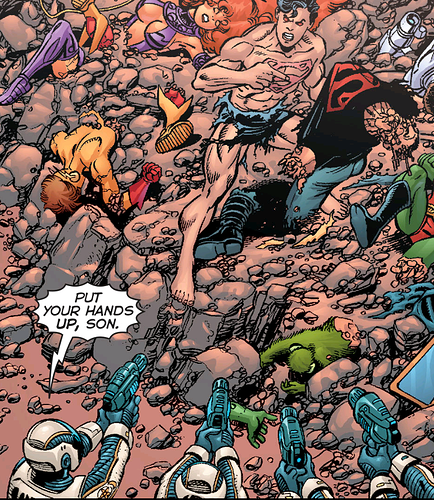 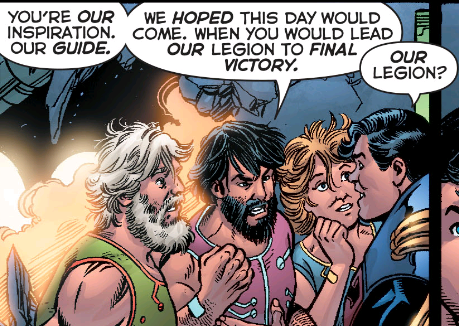 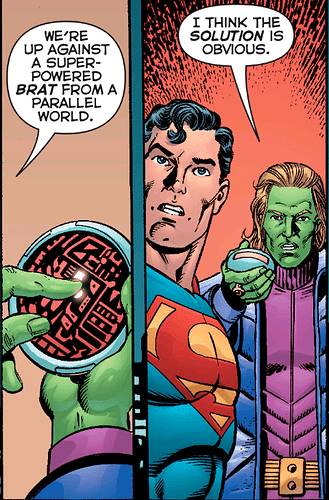 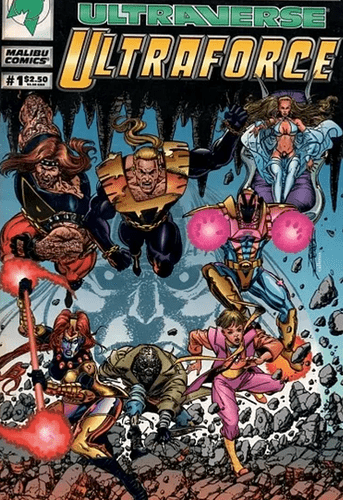 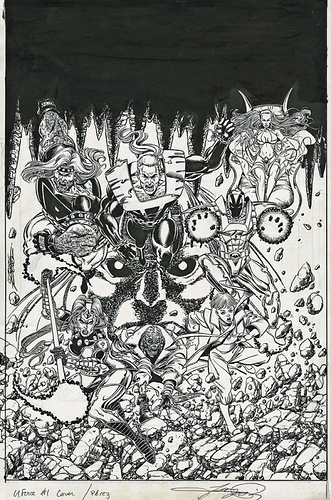 Any other reflections on Final Crisis: Legion of Three Worlds? We wrap this up tonight.

I guess we’ll just continue to read this the next two weeks.

It really is a lot to read.

Well, it thankfully just showed me how a character who died during Countdown comes back to life. I had read Final Crisis itself before, but never this spin-off.

I enjoyed the ending with Superboy’s parents confronting him about what they read in the comments, followed him by going to a message board with the banner “DC Universe”! Prime is among us!

The story in general is probably easier to follow if you’re well-versed in all three incarnations of the Legion. I’m not too confident about my own abilities in that regard. (In fact, I thought about asking you to come in to the Countdown discussion and explain to everyone who Karate Kid is, but I didn’t want to impose.

) The most amusing bit was the arguing between the three versions of Brainiac 5.

We read the Karate Kid’s origin back little over a year ago here in the Legion Club (May 15, 2019, where we read the first comics written by 13 year old Jim Shooter. Mr. Shooter… or should I say, Master Shooter, at the time introduced Karate Kid, Princess Projecta, Ferro Lad and Nemesis Kid).

For this week’s Legion of Super-Heroes Club weekly reading fun, we’ll be reading the all-important starting run of Jim Shooter, Boy Wunderkind! At age 13, in mid-1965, he wrote and drew stories featuring the Legion of Superheroes, and sent them in to DC Comics after a hospital stay got him back into reading comic books. On February 10, 1966, he received a phone call from Mort Weisinger, who wanted to purchase the stories. He liked DC of that time, but also enjoyed the drama going on in the new …

And something amazingly, Karate Kid is in the current Bendis run of Legion!

He has no superpowers per se. Karate Kid is a master of course of karate, but also traveled the Galaxy and beyond to learn fighting styles from other cultures / civilizations.

He has been killed off at least two or three times and then keeps coming back with rebooted continuity and as I say, he’s around now.

The Karate Kid in Countdown is actually somebody totally different from Val of the future as I understand it.

Just finished this one, and it’s a really solid big superhero basher. Prime and the Legion of Super-Villains work well, it brought back some great characters, and it had some consequence to it all, like White Queen becoming the Black Queen.

If there’s anything I was kind of disappointed in, it was that for being called the “Legion of Three Worlds,” it really didn’t feature the Reboot or Threeboot Legion much, if at all. I believe one of the Brainiacs calls themselves cannon fodder for the Retroboot Legion and, really, he’s not wrong on that front. They’re really just there for Johns to go “these ain’t the real Legion, the Legion I grew up with is.” At least he gave them all something to do in the grand scheme of things, though sadly I don’t think we ever see them again.

I suspect that Bendis is mixing a little of the other versions of the Legion from the late 90s and early 2000s in the current version. Guess we’ll see.

Oh yeah, we’ve already seen that with his New Earth taken from Post-5YL Legion. For me personally, I haven’t been too into the characters of Bendis’ Legion – there’s just SO MANY that it’s hard to really get a bead on who these characters are – but the world he’s building is very interesting.

Any other reflections on this reading before I post the new one tonight?

I know I’m way late on this thread, but I was sure not happy about two things from this story:

The deletion of Kinetix as well as the entire Earth 247 Legion.

Maybe now DC Comics would say that all the Legions still exist somehow, with the ending of Death Metal.