Welcome back to Year 2 of [Legion Fan Club] excellence!

We kick things off this new reading year with a selection from a very unique time both for Legion and DC, when some comics were published on thicker smooth paper with better coloring, Deluxe Editions, with no ads and more pages! 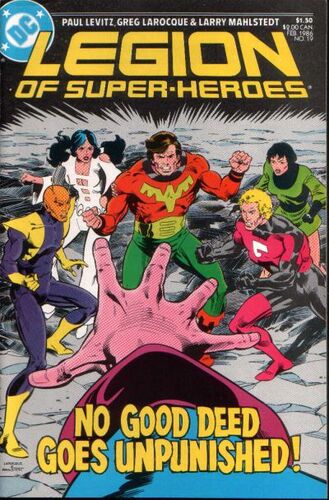 This really amped up the enjoyment back then of reading these sci fi adventures! For us present day Legion Fans, it means less issues per reading due to the number of pages per comic book (to contrast, New 52 comics had 17 pages each. Current day comics have 23).

Here then is “Legion Deluxe Life After Crisis.”

LEGION OF SUPER-HEROES (1984-) #19 LoSH Deluxe Format 19 The Controller summons the five formerly-lost Legionnaires into Limbo, where he gives them the chance to destroy the menacing war-world his Sun-Eater was being prepared to deal with.

LEGION OF SUPER-HEROES (1984-) #20 LoSH Deluxe Format 20 The Legion vs. the warrior Tyr and his entire moving planet—barreling straight for Earth!

A new Fatal Five are in the making and the mystery behind Sensor Girl mounts!

(Spoilers ahead) Things to Ponder: 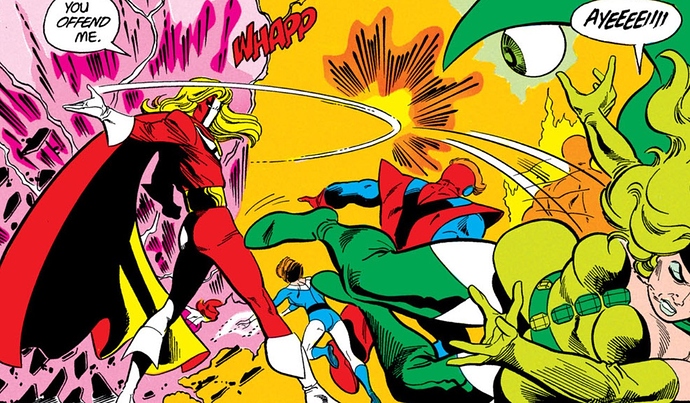 The pairing off seems, odd I guess. In a lot of team comics seems like their one main couple, and anyone else is sort of outside or leaser importance. I’ve lost track of how old the Legion is supposed to be in this era. It’s seems of that the Legion would progress from teens to adults when other superheroes barely age.

I have no clue who Sensor Girl is. Which actually kept me from googling her? I always feel like the mystery character typically gets spoiled to the reader way to early in an arc to make it a satisfying trope, but here they are doing a great job. Brainiacs obsessiveness is spot on as well.

Didn’t the trans tube get used in the Total Recall remake a few years ago. It was intriguing in that movie because it dealt with the shift in orientation you would have to deal with traveling through the core. I think it’s a neat idea, but unfeasible. It makes a great chat in private spot though.

Quizlet was interesting for a backup. I don’t have a handle on that character yet. To be honest it seems difficult to keep quizlet and compute separate. Aren’t they both depicted as flying orbs more or less?

@Meisaj Funny enough, as a junior higher, I wrote a short story for English class around 1968 about what might happen if a hole was drilled to the center of the earth to drain the core as a heat source etc. In my darling adolescent story, once the core was drained, a central metal sphere remained, suspended in place and of course there were dead creatures all over it.

But enough sharing time, lol, When I decided to jump a few issues ahead to read after Crisis in the mid 80s, we ended up missing the introduction to the new team members, like that little fella from another dimension, Quizlet. Here is the issue, nice cover for it. We totally need to read this as a group sometime Legion of Super Heroes (1984) 14 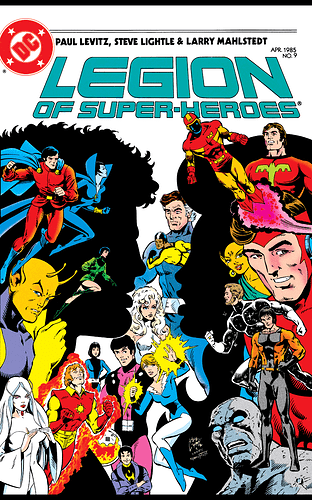 I always liked journey to the center of the earth stories. My wife loves the movie The Core, strictly for its cheesiness.

That was a weird introduction for Quislet. But a good issue overall. I think Legion recruit issues are interesting in that they are radically different from how other teams get members. Most teams either recruit established characters, or a new member joins through a whole story arc dedicated to them that establishes some back story. In the Legion of is just a whole bunch of new characters introduced and voted in over the course of one issue. Back stories be damned!

I’ve been searching high and low to see if any of these new characters show up in some previous story. We might find out they do later as we read these gaps we have yet to read. The Legion Academy does show up earlier in the 80s. I am pretty sure that the Comet character was earlier but the others I’m not sure of.

Isn’t this Peacemaker in the background?

@Don-el, hey man hope all is well. I was trying to send ya a DM but it said you weren’t accepting messages. Is everything cool? Also did you see Mr. Waid answer to my legion question?

Everything’s fine I don’t know why that message to you. Yes I even gave you a thumbs up

The new reading will be hopefully posted tomorrow night for the Legion Fan Club. It was great when Brian M. Bendis visited DCU a couple weeks ago, that he told us all that he would love to do more Legion comics, that’s great news! I sincerely hope he gets the chance behind the first 12 issues.

Concerning the current reading in the deluxe format right after crisis, I can’t help but notice Keith Giffen is pretty much nowhere to be found. I don’t know if he was all wrapped up with Ambush Bug and things like that at the time. I think Justice League with all the crazy stuff K Giffen did with the JM deMatteis came a year after (but maybe the team was busily creating it in 1986).

I do know this: the Legion was best in the 80s when it was Paul Levitz with Giffen collaborating on the plot. When it’s just Paul L, it’s pretty good reading, as we also saw in the runs between 2009 to 2013, but it does lack some of the magic compared to when he was collaborating with Giffen. I feel the same way about when Giffen akes over Legion at the end of the 80s with his bleak vision then. It’s entertaining but it lacks some of the fun creativity in my opinion.

here’s a fun panel from I believe it’s issue 19 of our reading I really like these two characters a lot, Fila straight a lot of a fun concepts of Legion through the years. 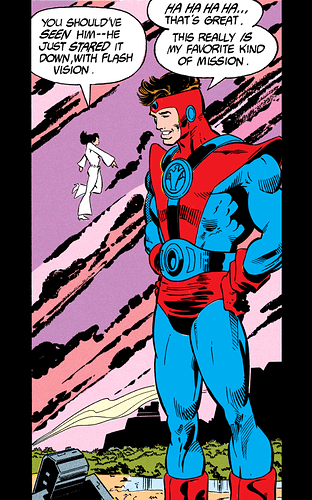 The new reading for Legion will have to go up tomorrow, time just flew I guess!

Quizlet. Serious? There is a character named Quizlet… Isn’t that what a popular study app is named?
Is someone associated with the app secretly a huge DC Legions Fan?!
So many questions…

Excuse me? Quizlet… I am so amused by this! I did I live this long & not know that a popular study app & a DC Legions character shared the same name!
Oh wait! Most likely it’s because I didn’t even know much of anything about the DC Legions of Superheros were a thing, until my Super Fan Friend, @Don-el showed me the Future via his love of the Legion with my enjoyment of ModPodge. Sorry, not sorry for resurrecting an older post, but I just started to learn of this Legion this week.

Lots of worlds to love here for sure @toonatonian ! Too funny about Quizlet.

Yep, at this “catching up to the club” stuff again.

I mean, it makes sense. These are young, like-minded people constantly in stressful, life-or-death situations living together, of course there’s going to be a lot of hooking up.

In terms of whether it hurts their dynamic as a team, it potentially could. What if a Legionnaire had to choose between saving an innocent or the partner they love?

That said, while it may not be a good idea logistically, it does make for good drama, which is probably why the group never says anything about it.

I’m 99% sure I know who it is (it’s been a minute since I read some Legion stuff), but I think the big character they’re trying to lead us to believe is Supergirl somehow surviving the Crisis and back in the 30th Century. It would explain why Saturn Girl would trust her without hesitation and the hologram of a missing world.

It’s possible – it reminds me of the concept of transatlantic tunnels that have been around for decades before this comic came out.

A transatlantic tunnel is a theoretical tunnel that would span the Atlantic Ocean between North America and Europe possibly for such purposes as mass transit. Some proposals envision technologically advanced trains reaching speeds of 500 to 8,000 kilometres per hour (310 to 4,970 mph). Most conceptions of the tunnel envision it between the United States and the United Kingdom ‒ or more specifically between New York City and London. The main barriers to constructing such a tunnel are cost first e...

I think the best one was the Invisible Kid’s because it didn’t just highlight his power, but also felt like a step in Jaque’s character arc, having him actually choose to stay as a Legionnaire.

I had fun with the mystery of Sensor Girl as we reviewed these old issues. I think a lot of it was that the costume is pretty cool. It’s funny to me that I forget these kind of details like the identity of Sensor Girl until I re-read the series, but then again it’s been about 40 years, oh boy.

Concerning drilling a hole to the center of the Earth, and transatlantic tunnels, I see a sort of similar concept has slowed down now in California of that super train that’s in the sealed tube, I believe it’s an Elon Musk production… okay it’s not underground but it’s in a sealed tunnel that’s got to count for something LOL.

I enjoyed the sensor girl story. My main regret is that I figured it out while reading the reveal issue but before the reveal. No one believes me. Of course since at least part of the time the writers were planning it to be supergirl, I guess I can understand being misled. Also, I thought the tunnel came from supergirls first initiation.