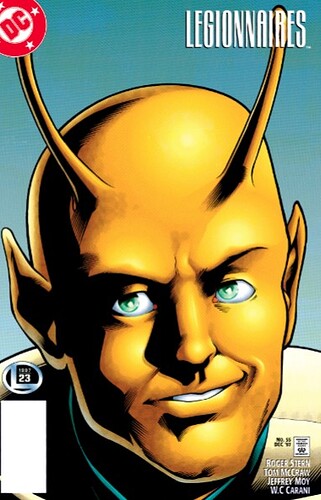 The Composite Man returns, seeking revenge on the Legion and Chameleon in particular!

I have completed Week 4 of Legion Academy Hero Training 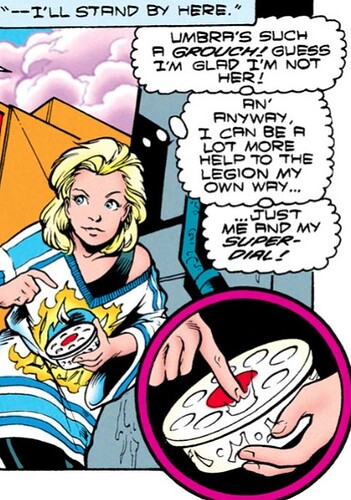 And is that Blue Devil again on her shirt?

Since I missed last week I thought I’d try to do this one quickly.

I have never read this series before. I thought this version of Element Lad was interesting.
Yes, I liked the Dial H character. I really enjoyed the original Dial H stories way back when.
No, I didn’t feel sorry for the Composite Man.

• Who were your favorite heroes in the attacking Legion team? Kinetix and Live Wire

• Do you like the futuristic “Dial H for Hero” character? Very much! The fact she is very young matches the history of “Dial H.”

• Did you feel sorry for this Composite Man? He’s tragic for sure. I’m thinking if someone could just slow him down, help him connect with others, he might turn a new leaf.

I’m afraid I don’t have as much to say as usual (maybe a good thing lol); I haven’t read this series yet so I have no context for this issue haha

So, to explain why you suddenly have what seems this random issue to wade through, its like this:

[Legion Fan Club] uses this sheet link to track reading every digitized issue of Legion, year after year, starting May 1st of 2019:

Issues that have no Column B Legion Date on them have not been read by the club as a group yet.

So May of this year the club will have been around 3 years, a drop in the bucket compared to other Legion Fan efforts, but we do occasionally have fun. My original vision was to have the Club complete all digitized Legion comics in a six year time period, but that is no longer looking possible, which is fine. We’ll instead slowly sip the issues like a fine wine.

that’s a nice list haha
How do you decide what we read next though? We are kinda jumping around a bit, right?

Well sometimes we read two issues in a row like a few weeks ago, but really I figure any given month just keep sampling a little of each of the eras. I believe almost every individual member has their own unique era that they love, so I feel if I focus on one era all month, I’m going to lose 2/3 of the club.