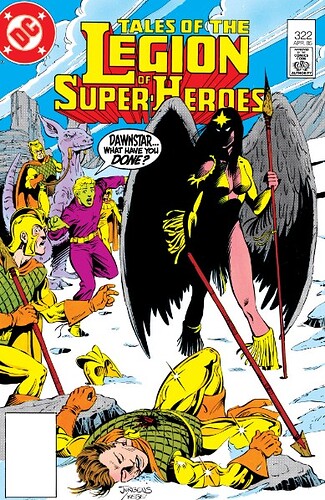 100%I have completed Week 2 of Legion Academy Hero Training

I think this planet reminds Dawnstar somewhat of her home, and this leader is someone she can have a life with as a couple including physically which is something she can’t have with Wildstar.
I think Nora is grumpy because, despite her words to Element Lad, she likes being in charge.
That sure looks like Blue Devil, doesn’t it?

I’m pretty sure it is guess we’ll see

Sorry I just added the poll that notes that you read it.

Keeps me in practice for the NFL season LOL

I think Dawny either has found someone physically attractive to her or perhaps there is an outside cause attracting them.
Well if thom was your boyfriend, wouldn’t you be grumpy? Seriously, because Dawny and Brainy are lost under her leadership.
If not Blue Devil, one hell of a coincidence and one also looked a little bit like Etrigan

Oo, I read this one last month! haha

@RexRebel @jihaehae I’m still not sure why Dawnstar was so happy on that planet and with that fellow when she was injured and being attacked by everybody. I’m not sure as well if that weird food they’re nipping on might be part of the problem I forget if she ate any of that. Maybe there’s spores in the air as well that enchant everyone.

I hope we find out more later in this series as to why Dream Girl’s being so angry at lovable Thom, but for sure his timing is way off and his empathy is about zero for what she’s going through as a leader during such a wild time for the Legion.

I am real sure that is Blue Devil we’re seeing and I think it’s deliberate. This is around the time his well written well drawn series was being done.

I once heard that this story was a redone Star Trek script that wasn’t used. Does anyone know if this is true. I could definitely see Kirk in a similar (if gender-swapped) situation as Dawnstar.

Great observations, @idle453.87595 . I definitely want to stop by this storyline as part of our weekly training in the near future (or in 3022, whichever comes first).