Universo has stolen the Legion of Super-Heroes’ Time Bubble. The Legionnaires split up and follow him into the past, but each ends up in a different time period! (this villain appears in many of the later versions of the Legion including New 52, the most recent!)

First appearance of the Fatal Five! With membership of the Legion of Super-Heroes severely diminished, the team must turn to five dangerous super-villains to help defeat the Sun-Eater! Frankly one of the most intriguing appearances of this evil team, IMO!!!

Part 2 of this wild team-up! The Legion of Super-Heroes and the Fatal Five combine forces to stop the might of the Sun-Eater! But at what cost will victory come…and when it’s all over, what will happen to the Fatal Five?

Her are questions to use as a guide to your reflection on this story: (these could be spoilers, so maybe read this part after you are done with the 3 comics):

Posting of first part of this particular storyline series, if you missed it: 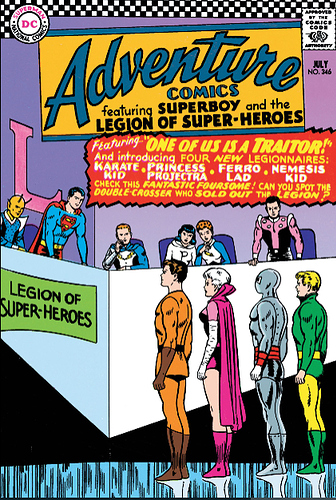 Legion of Super-Heroes Club: Weekly Reader for May 15th 2019

For this week’s Legion of Super-Heroes Club weekly reading fun, we’ll be reading the all-important starting run of Jim Shooter, Boy Wunderkind! At age 13, in mid-1965, he wrote and drew stories featuring the Legion of Superheroes, and sent them in...

Sink your reading teeth (they are located behind your wisdom teeth I think?) into this tasty morsel of a two-issue featurette that took place during the Levitz / Giffen years! Written and drawn by some fellow named Dan Jurgens. How old is this guy? Oh, I get it…time travel….

If you want to talk about the Legion Club and discuss what you want this Club to be, you can sure do it here or also many members are on this Discord channel:

Check out the DC Universe: The Book Club: The Fan Room community on Discord - hang out with 236 other members and enjoy free voice and text chat.

Next week (Legion Club First Wednesday of the Month July 3, 9 pm EDT WatchaLong week!) we also use the Time Bubble to go forward a little to a very very special 2 or 3 issue event in Legion history that CHANGES EVERYTHING FOREVER, one that by the DC Universe rule book should not even be here (don’t look this way, Kelex)!!! 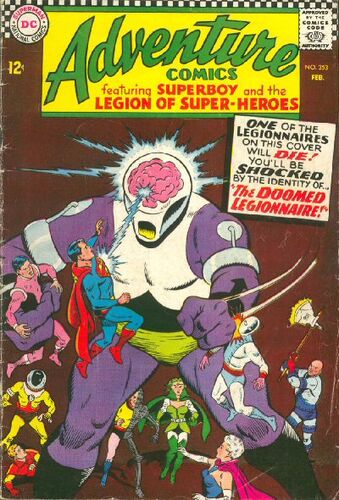 This is Week 10 of the Legion Club readings, take note!
Oh, and 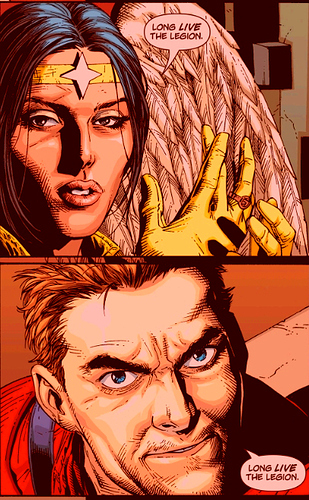 Now that would be a fun watchalong, maybe Warner owns that…it was Sy Fy…

Universal owns all of the Battlestar Galactica series (and the Syfy Channel too, along with USA and other channels).

Booster Gold has me sold on this week, even more than I already was

Nice! Yeah I can’t get enough of The Adventures of Booster Gold that’s for sure! For some reason I relate to him… maybe it’s the man out of time aspect 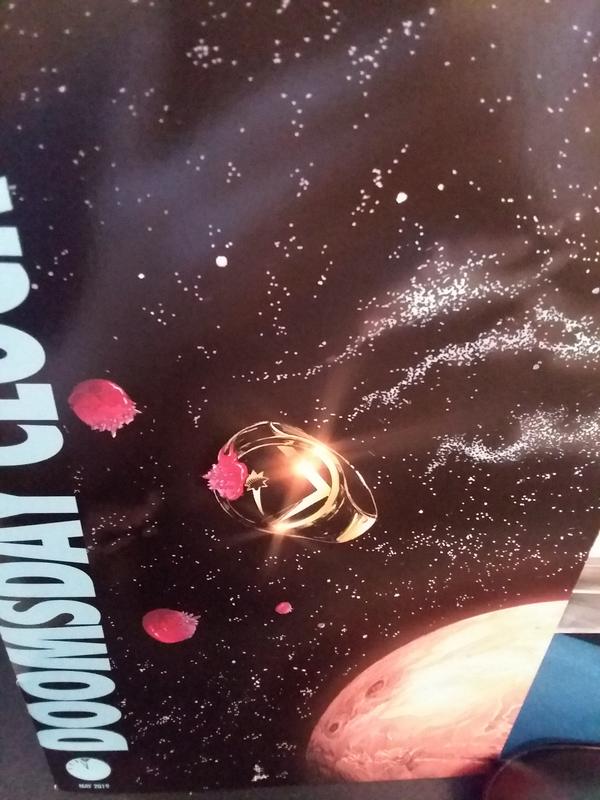 … especially with the first page of Doomsday Clock number 9!!! 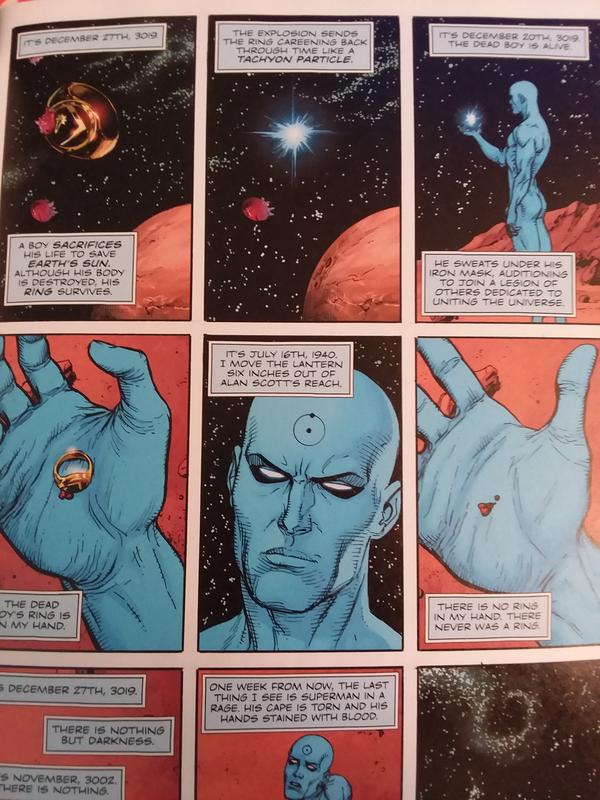 How about the one where Ferro Lad died.

It’s funny, with #349, starting with the Legion judging a science fair in the future, I had this mental image of Superboy slipping that he just had a science fair at his school in Smallville. The Legion ask him what he did, if he did something like an atom rematerializer or a shinking ray, and he has to watch their eyes glaze over in pity as he says it was a paper mache volcano.

Superboy 203: Cover art by Nick Cardy. Massacre by Remote Control, script by Cary Bates, art by Mike Grell; After the Legionnaires run a practice drill on protecting their headquarters, Invisible Kid collapses; He reveals that when he turns invisible he can see an invisible world and one of its inhabitants, Myla; Later, Dream Girl dreams that Validus is coming to attack the Legion; Saturn Girl confirms that the components of Tharok’s brain being held by the Legion are summoning Validus; Validus attacks Legion headquarters and kills Invisible Kid just as he destroys the components of Tharok’s brain controlling Validus. 36 pgs.
YIKES!

Not digitized by DC (yet). We do have Superboy #200, a black and white copy, featuring the wedding of Bouncing Boy and Duo Damsel, which we will plan to read during one of our weekly Legion Club readings in the future!

So many weddings, so little time!!! 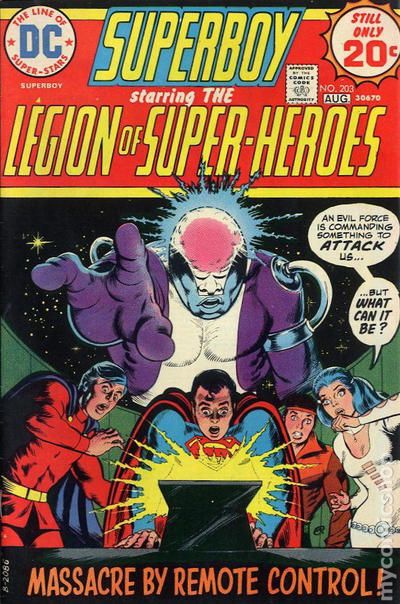 “What do you love and what do you hate about the concept of Universo as a villain?”

Honestly, while the plot of Legionnaires having to jump across the time-stream to save the day to be a fun concept, I find Universo himself, at least in this story a little “meh.” His power set is really inconsistent (if he has problems keeping all the Legion under his control, how can he control people across time?), and the only real emotional hook is that he’s the father of the kid that helps the Legion out; but the kid himself is such a nonentity that it’s not really that compelling a twist in the end.

“Did you find having the Legion join forces with the Fatal 5 believable? Why or why not?”

I mean, it’s a little odd that the storytellers go to great lengths to show other heroes (who I’m pretty sure we’ve never seen before or since) say hell no as a convenient excuse to have the drama of bad guys and good guys teaming up. That said, I do find it interesting that the Fatal Five, one of the Legion’s arch-nemesis’, seemingly only form together when they team up with the Legion.

“How impressed are you that Shooter is killing off Legion members right from the start in early 1967?”

I mean, Lightning Lad had sacrificed himself four years prior to this in Adventure Comics #304 – however, that death only lasted about eight issues. It is somewhat impressive that Ferro Lad is at this point one of the few big-two superheroes that have stayed dead (though I’m sure the constant universe rebooting helps).

Also, Jim Shooter himself has said that the reason why Ferro Lad died was that he was annoyed that Mort Weisinger refused to let him be black under the suit, because he was afraid of “losing distributation in the south,” so when he was looking for a character to die in a story, Ferro was a perfect fit. I think that is probably a big part of why he stayed dead, at least during Shooter’s tenure.

I was compelled to read this comic…was it the cover or something…more sinister and subliminal?

Fun writing by young Master Shooter, sending 5 classic and still strong Legion characters off by themselves to show their stuff. I won’t soon forget Colossal Boy vs the Medieval Siege Engine and the Catapult to the gut!!!

Nice twist in the end having Universo’s son defeat his dad…but still love him! Awwwwww 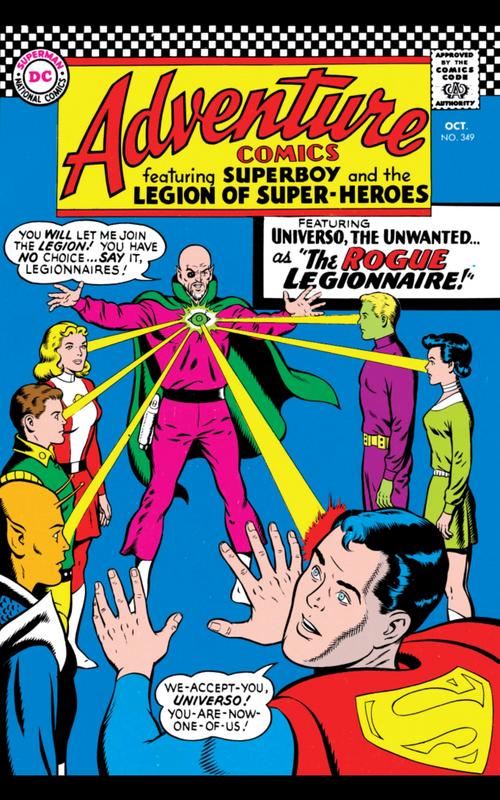 This is the last evening for joining in on this particular Legion Club reading.

Don’t forget about the Booster Gold extra credit reading. I know some of you were excited to check that out as well.

Oh yeah, I checked that Booster Gold issues too. It was…okay, I guess. It was interesting seeing them tie into Booster’s origin and the Legion themselves were okay, but the villains of the book were just plain freaking dull. Honestly, were it not for the book club, I wouldn’t have finished even the first issue of it. I think it’s just the writer in general – I have literally never read anything by Dan Jurgens that I thought was anything more than just serviceable.

The Sun-Eater is a scary idea. The concept of a cosmic cloud showing up and destroying planets comes up in Jack McDevitt’s Engines of God series, where basically these destructive clouds are attracted to any planet showing right angles in architecture. Eventually it is ascertained that some ancient civilization invented these destructive forces that now roam the universe. In this book series, McDevitt is confronting the very odd situation of no parallel fellow intelligent beings ever being found or communicated with by mankind.

So forsure, this is a terrifying reason for the Legion to team up with the worse of the worse. The Suicide Squad of the mid 1980s on is also built on this concept of using villains for mutual good…well, except the part about the explosives in their heads I guess…

Am I impressed that young Master Shooter starts having Legion members sacrifice themselves in battle so soon after being made the writer for Legion? For sure, this wasn’t a standard thing to do in comics back then. It does give a certain weight to the adventures, a seriousness of what they might encounter. As Jay_Kay mentioned earlier, Lightning Lad seemingly passed away in an earlier tale (and I am a huge fan of how he ended up having his arm replaced by a metal one, my favorite version of him).

I give this two issue story a solid 8 out of 10 in my opinion based on the great original idea for the menace of the story, and the imagined evil doings of the Fatal Five even as they try to do good.