The distinguished and greatly-renowned Legion of Super-Heroes Fan Club Book Club reading selection for this week is: Adventure Comics #354, 356, 357, 360.

This is right after the saga of teaming up with the Fatal Five to stop the Sun Eater that we read last month from Jim Shooter. Master Shooter continues at the writer’s helm, with the mightily talented Curt Swan illustrating these further tales of the 1960’s Legion!

#354 DC Universe What will the Legion of Super-Heroes be like when they grow up? Join Superman as he visits them in the future and find out. Learn who will marry and who will die!

#357 DC Universe The Legionnaires are being haunted by the ghost of Ferro Lad!

#360 DC Universe The Legion breaks out their own from prison!

Here are questions (spoiler alert - if you want to wait to read the rest of this after you read the comics, you have now been warned) to use as a guide to your reflection on this story: (these could be spoilers, so maybe read this part after you are done with the 4 comics):

Our “extra credit” reading this week: (just the stories about the Legion in each comic)

Adventure Comics #267 12/59 DC Universe
“PRISONER OF THE SUPER-HEROES!” Superboy is shocked that his friends from the Legion of Super-Heroes have appeared in 20th-century Smallville and are doing their best to upstage and beat Superboy in saving the day, solving crimes and stopping menaces!

Adventure Comics #304 1/63 DC Universe
It’s Superboy versus Superman—and only one will remain! Plus, the death of a Legionnaire in “The Stolen Super-Powers!” Also contains pages reproduced in black and white.

Next week we use the Time Bubble to go forward a decade for a light reading to go along with our monthly Watch a Long fun the evening of Wednesday August 7th!! 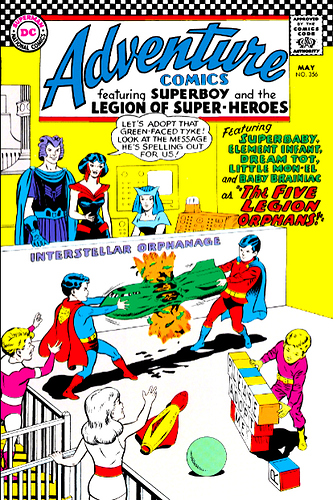 Wait you already read it?

As have I – the extra credit stuff pretty recently with the first appearances, because I read a digital trade I had in Comixology for the first stories, and I vaguely remember reading the main issues a long time ago. Looking forward to reading these again, especially since I believe the Adult Legion story has ties to the Great Darkness Saga later on.

That said, on the second question about buying the reasoning for adopting the “Legion tots,” I’m gonna go ahead and assume that I probably won’t. As an aside, I cannot call small children “tots” without giggling, because it makes me think of tater tots.

I’m almost through with the first issue

Remember, with all these book clubs, just take baby steps…

“What was fun about seeing the Legion as older adults with kids and careers in issue #354? What did you like and not like about the concept (new code names etc)?”

One thing I liked was that it gave both readers and future creators things to play with to tease readers of what could happen. If I remember right, this is technically the first appearance of “Shadow Woman,” and around Great Darkness Saga, they tease her going to a “science asteroid.” I also liked the idea of Matter Eater Lad being president of his home planet. However, I didn’t like that pretty much all the women on the Legion would basically become housewives. I mean, I get that this was written in the late 50s/early 60s, but sheesh! The fun about the Legion is to imagine a future where anything is possible, it’s kind of sad seeing a lot of these brave, intrepid adventurers being basically Stefford Wifed.

“Did you buy into the explanation of why the 5 legionnaires suddenly became tots who needed to be adopted? Which tot’s story did you find most entertaining and why?”

So going into this, just barely remembering this story, I thought the why of it was going to be the parents were going to use them and their powers to commit crimes, because…I dunno, they’d be more pliable that way? But the fact that they did it because of their world losing all their children was kind of surprising and sad, though I would think such an event would be widely known about the UP, and if there are intergalactic orphanages, surely they would find an exception to the rule against cross-species adoption in this situation.

It actually reminded me of an episode of Star Trek: The Next Generation where a super-advanced alien species who are unable to reproduce steal all the children off of the Enterprise and there’s this tense negotiation in trying to get them back. I think a story like that with the Legion would have been far more compelling than this.

Also, as an aside, why did the writers of this story think that babies basically speak like Bizarro? Like, they maybe act like Bizarro sometimes, but I get the distinct feeling that none of the people involved in this story have even interacted with a baby in their life.

Jay_Kay, totally agree, part of why I love to read these older Legion stories on occasion (and especially love the wild yet well-drawn covers) is that they often come wrapped in both intriguing / entertaining plots but also have the invariable old-school '60s Americana unenlightened nonsense, like assuming all female Legion members would just be stay at home moms en masse.

“In issue 357, do you feel the story explored the guilt the other team member’s still were dealing with concerning Ferro Lad sacrificing himself to save Earth? What did you find most compelling in that part of the story?”

It did, and it did it SURPRISINGLY well. I think the part of the story that explored this best was seeing Cosmic Boy trying to do normal things at his home (something you rarely if ever see in any Legion story, let alone in the Silver Age) and being out of step and miles away from his family and them not understanding. It actually reminded me of soldiers who come home from war feeling post-traumatic stress over friends who died out there. This was a really good exploration of it, so much so that I was a little bummed out when the supervillain showed up and monologued his inner schemes – I would have much rather seen a story where each character deals inwardly with the death in their own ways.

Jay_Kay, that combo in young Master Shooter’s Legion work is why this run is among the first for us to visit on our 6 year mission through Legion Space and Time! He was light years ahead of the rest of the DC “bullpen” writers in digging into his characters’ emotions and motivations, but with a quick spin would bring in the quirky / wacky DC '60s feel to other parts of the narrative.

First, let me behave and actually try to answer my own questions now that I have meticulously read these:

(this is so much easier to do on my PC, but I’m kind of preferring relaxing downstairs and doing this via Android 10’ tablet and wireless keyboard)…

The museum exhibit decades in the future for the fallen Legion members. 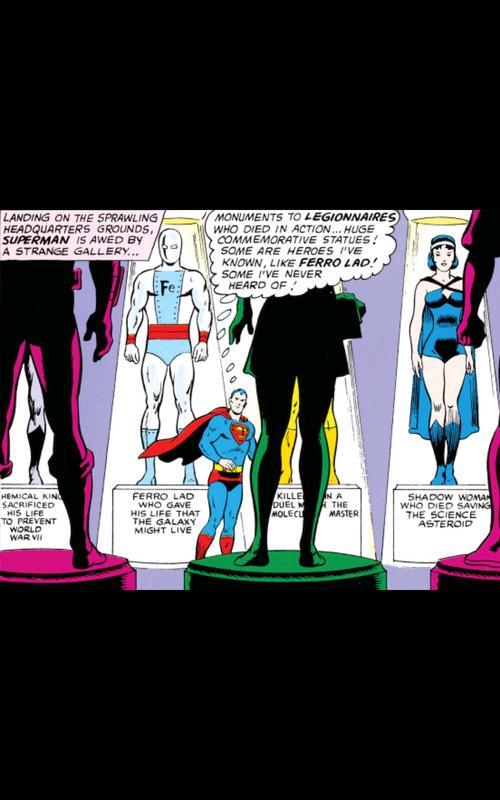 Ok, before I get to the last two questions, let’s talk about Master young Jim Shooter’s fixation with smoking pipes in these issues: Exhibit A…notice, we never see the young Legion puffing away… 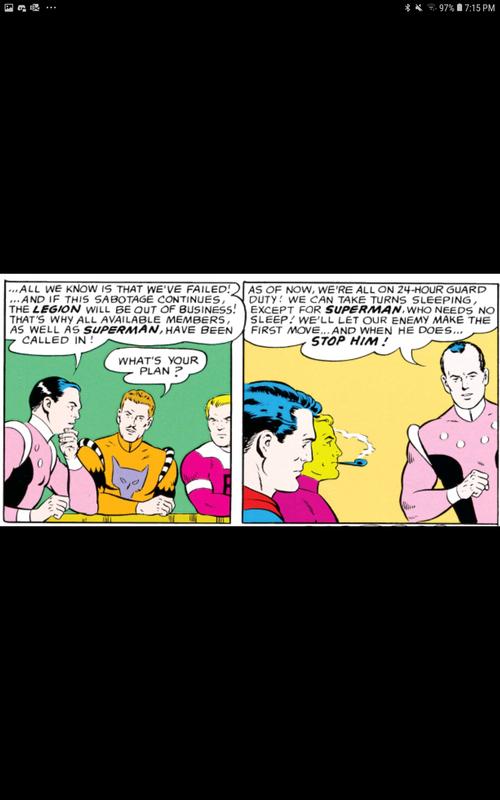 “In issue 360, long before Giffen blew up the happy times of the legion in late 1989, this story put our heroes on the ropes with the Legion being outlawed in a story from the ‘60s. Would you say that this story is the best of the bunch this time around? Why or why not?”

I think it’s probably the strongest in terms of plot, definitely. I liked how they paced things out and enjoyed all the espionage aspects to it. There’s still some weird contrivances/oversights, like how did they not realize that Matter Eater Lad could just eat through his chains or that Element Kid could manipulate the structure of his to break free? Also, for as clever as his schemes are, I still don’t give a single solitary crap about Universo. He’s just so generic to me, same with his bland-ass son.

I have to admit, when I was reading this, and getting to the part where Brainiac 5 realizes Universo’s been drugging the water, I suddenly got this image of my head of Alex Jones as Brainy that just made me laugh my ass off. “THESE GOT-DAMNED UNITED PLANETS ARE DRUGGING THE WATERS, BRAINWASHING THE MASSES, TURNING THE DURLANS GAY.”

Smoking pipe exhibit B: oh, and let’s have the 6 year old Superbaby light it for you pal…yeesssh 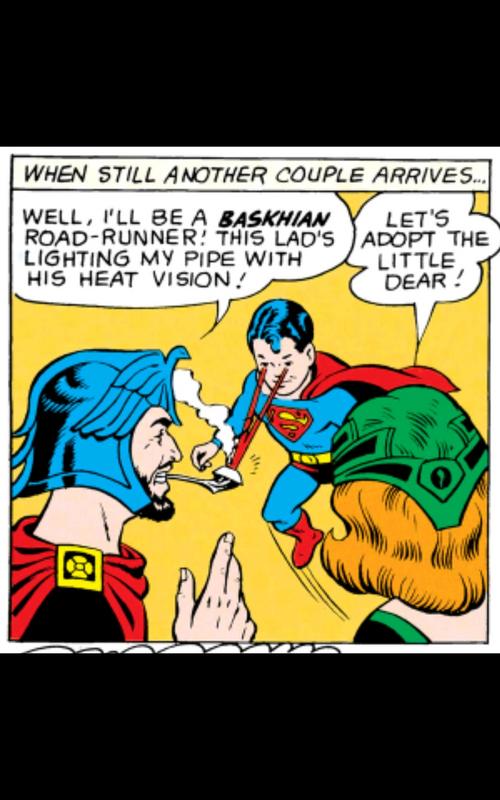 Shooter does a fine job of pointing out how natural it is to keep going over the event that resulted in someone passing away (or with being permanently injured- some chilling very sad stories from the world of Sports about that this summer). None of us are God-like, we aren’t totally in control ever, and sometimes, once in a while over the din of noise we usually surround ourselves with, that Abyss is visible to us.

The introduction of the Controller race from an extinct universe was cool too. I’m real sure they appear in later DC comics.

(come on Community 2.0, lol)…you know, THIS cover- now to try to remember which issue of Tales of Suspense featuring Iron Man this reminds me of… 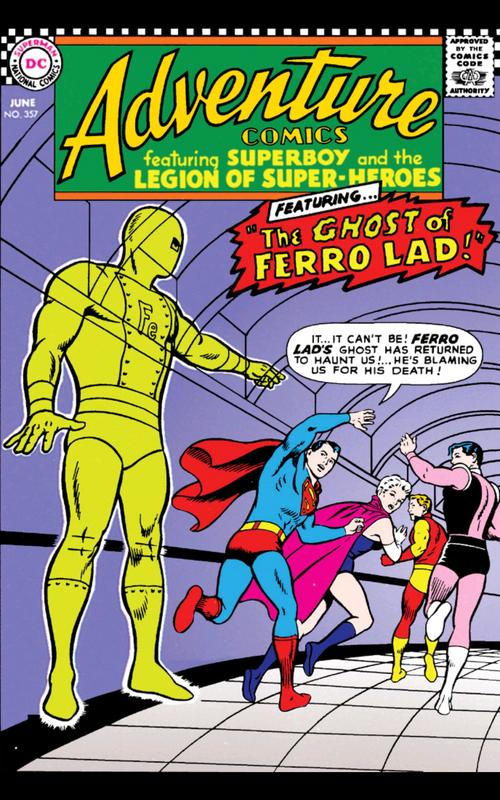 Nice, Jay_Kay, you got to the extra credit! It’ll be way way too funny if Bendis’ first Legion villain is Universo and Son…hahahahhaha