Welcome back Legendary Island of Misfits! It’s been a long, cold, lonely winter without new episodes but they are back! On April Fools Day no less. Seems appropriate.
Here are my thoughts on this week’s episode:

Darn spell correct… should be Lucha

The moment of the episode. Sara’s flick gets all the heat, but we’re overlooking John’s little excited “getting ready to smoke” wiggle.

@IMM The monster was kind of like a Hawaiian werewolf so getting scratched seems to have turned Mona into one.

Hopefully the Time Bureau stuff will be done after this season. The present day Time Bureau scenes just seem to break the momentum of whatever mission the Legends are on. The show works best focusing on the Legends messing around in various times with Gideon telling them where to go and what needs to be fixed.

As far as Sarah being a hypocrite when the legends were sending the creatures to hell. The thing there is Sarah and the Legends realized they were wrong and stopped doing it. So don’t think Sarah is being a hypocrite. Honestly, I had some problems with that as Ava’s arguments to Sarah didn’t quite seem in character, seemed she kind of acted out of character just to service the story.

The Zari and Nate hints of a romance seemed to come out of nowhere. I am not really against it but it felt like they are teasing to get them together just because they aren’t paired with anyone so far. But maybe it will grow on me, or maybe nothing will come of it.

I will admit the creature being shot in the end and Mona ending up being infected was a hell of a twist I did not see coming. Next episode looks interesting.

Not their best episode IMHO especially after such a long break. But I enjoyed it well enough and the next episode looks interesting. Mostly I am just glad this show is back.

I have missed Mick Rory so much! I want to play the card game.

DanTheManOne1 I thought about the scene more and agree that they are no longer hypocrites. They originally thought they were doing the right thing with sending them to hell, but I think it started to change with Charlie that maybe they are not all bad.
I wonder if Ava was just feeling pressure from her job and worried she will be fired if she doesn’t tow the party line. The time bureau is a big part of her life and who she is and worries Hank will pull funding. She should have stood with Sarah more but this may have caused the rift.
Yeah the Nate and Z romance came out of nowhere. Maybe the writers realized they did not have much to do with Nate at the bureau and Z was not given much to do so let’s pair them up. I am not sure how much interaction they had in past that would drive this now.
I also agree with the comments that the bureau slows the momentum down. They need to focus on the legends and less on office unless they conflict in the field.

@JLWWSM The executive producer posted a picture of the card game box back in January. I love the Doctor Who references in the artwork.

This show seriously needs to have more merchandise. It would be great to have the card game or a plush Beebo! 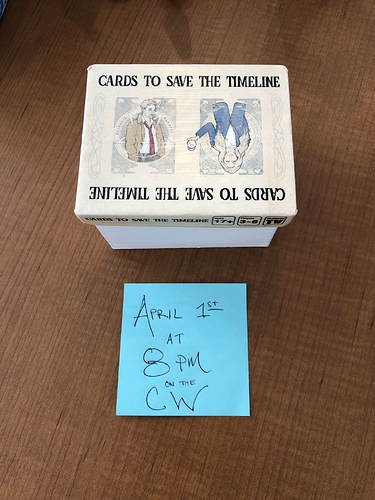 @Beagle
Thanks for sharing that! I agree, more merchandise would be cool. I love the absolute craziness of the show.

@Beagle The world needs a plush Beebo. He’d be most welcome.