I confess, I never cared for Jack Kirby’s art. I recognized his importance to the history of comics, but his art felt bulky with odd poses and thick bulky lines. Yes, I thought he created great characters but others rendered them better.
Then I began reading the original Mister Miracle run and I began to see something different. Kirby’s art has a power and dynamism, the figures lean toward you almost breaking out of the page. When Barda busts into a room to save Mr Miracle you feel her power. His characters are creative bordering on the absurd, but never crossing the line.
His story telling is equally unique. Early in the run, Scott must descend a highrise populated by regular people driven made with paranoia. He must escape, but not hurt the mad innocents trying to kill him.
Thanks to these 18 issues, I’ve learned to love King Kirby

Well, the Kirby has never been my favorite cartoonist/illustrator of sequential art. But-- his STORYTELLING is-- magnificent. More words are not necessary.

Funny enough, many iconic artists have said the same thing when talking about Jack Kirby. They didnt like his art at first, and then later they realized how genius it was and how it went with his storytelling.

There is a great youtube video featuring many industry greats talking about Jack Kirby. https://youtu.be/XoXeiEXJrgc

Basically tells the story of Jacks career throughout DC and Marvel and his impact on the industry.

Every artist I loved as a kid was terrible, besides Erik Larsen and Mike Allred. I didn’t learn to appreciate Kirby until later, either.

MajorZuma I think you nailed it on the pairing of art and story. His still just works so well with 4th World characters and settings. Also, like I’ve said there is a raw power to his work that is lacking in some more refined styles.

I’m 70, and it took me no time at all to see Kirby’s brilliance. As someone else pointed out, he first conceptualized the Bluetooth headset! He drew action like nobody else, his work is immediately recognizable.

For me, Kirby belongs in a very small group, along with Eisner and Carl Barks, who were STORYTELLERS. Frankly, I can’t, off the top of my head, think of any others.

I will also mention that Kirby plotted virtually every story from a brief outline and turned in finished work, ready for Lee’s frankly brilliant dialogue.

Oldrocker you’re right, growing up in the 70s I was more influenced by the art of Swan and others. But, I got there eventually on Kirby

Check out CHALLENGERS OF THE UNKNOWN. Much fun.

I had a similar experience. It took me reading the Fourth World stuff, especially New Gods, to really feel Kirby. But Mister Miracle really connects with you. Makes the new Tom King series hit that much harder…

yeah I totally drunk deep of the Kirby Kool-Aid. I even have a softcover trade paperback of Devil Dinosaur as well as four hardcover volumes of the Fourth world omnibus…

but at the same time, the very best of Kirby stuff is when he was a co-writer and he had somebody else helping him with a dialogue in my opinion. Later on, his Black panther and Captain America runs, while a fun frolic, just didn’t have the gravitas of when he teamed up with other writers… Again in my opinion.

Don el I’ve read the first couple of Jimmy Olson and will have to get back to it. As they may say in the series, that was a heavy far out trip man.

It was the herald of the beginning of the Bronze age wonder!!! ( he said in his Optimus Prime voice) 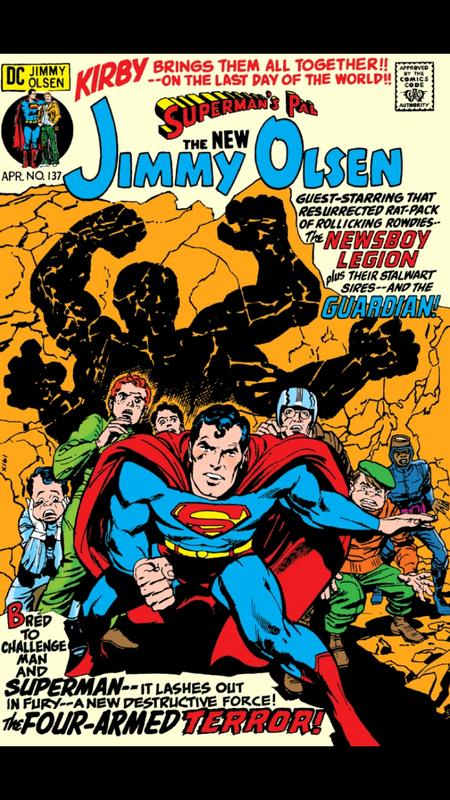 Agreed with other writers here. It took me reading New Gods and Thor to really get Kirby. Now I can’t get enough.

Mister Miracle is such an incredible book. I love it!

Elvis is King, Lebron is King, but Kirby is THE KING!

brother you nailed it.