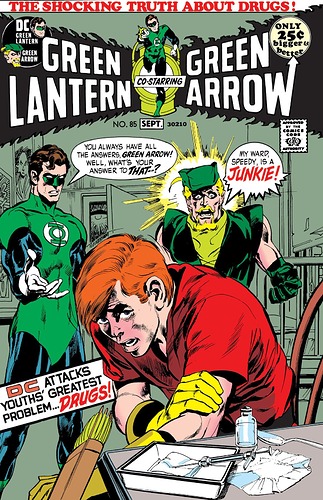 Apologies for missing last week. My PC decided to stop working and I’m still in the process of fixing it.

Ah yes, these are some issues I’ve been looking forward to getting into. These are some history-making comics here – the story of Speedy getting into drugs is what started to weaken the massive juggernaut that was the Comics Code Authority to the point where it would become a rubber stamp within a couple decades and then completely disappear not long after.

I’ve never anticipated more seeing someone get addicted to smack.

No worries – life gives you lemons sometimes. Or as someone else said it best: It’s all a bit Afterschool Special, but it’s still a significant historical landmark.

I enjoyed them both, but I think 84 was more enjoyable. Though, 85 absolutely could have done it had the ending not been spoiled by the cover and obvious hints.

Not particularly. I suppose the way the girl ended the story in the first issue was unexpected, but the rest seemed to just flow.

It’s pretty iconic, which unfortunately makes it lose it’s edge. So many copycats and remakes of the story soften it’s original impact. It’s definitely still a good story, and really adds depth and humanity to the character.

I think I’ll go with 85, both for it’s history and for what it does for the Arrow universe going forward.

Well, Carol calling Hal “Mr. J” in issue 84 was definitely a record scratcher in my head. I know this was done decades before Harley Quinn came to being, but it still felt…weird.

It was also surprising to see Black Hand being such a…standard super villain. I’ve only really seen him after Geoff Johns reimagined him, and after seeing what Hand was like before, I have to say I think the newer version works better.

Usually in superhero stories, characters getting shot in the shoulder is something they just shrug off and continue on. So it was surprising to see that in issue #85, Ollie gets shot in the shoulder and he is stuck in a sling for a good chunk of the issue. It’s something I probably wouldn’t have thought about much but I’m still recovering from a shoulder injury that happened all the way during the end of February.

It’s…okay. I think in terms of what it does for the industry in general, it’s definitely a watershed moment, but I feel like it loses some of it’s impact when we don’t really see Roy’s full story. He tells us at the end of the issue, but I think if we actually saw what happened to take Roy to that point, it would have been more effective. But, for all we know, that could be something we see in the next issue.