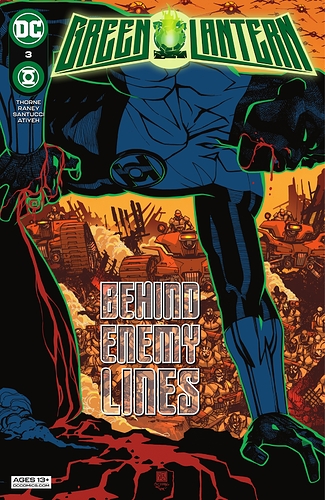 So far, I am liking this new series. Hopefully, it lives up to these first issues.

All around I’m enjoying the first 3 issues and interested to see where it goes from here.

I liked the beginning with John being in the dream thing. The idea of a GL High School sounds like it would be great.

Not really surprising, but Simon becoming Cyborg is strange. Especially how he phrases it. Part of his origin was overcoming the fear that the ring would fail and carrying a gun as backup

I like it. He’s got that architect brain that makes his constructs interesting and his character fun to follow.

I think I’ll go with the sort of ending coda of Jo trying to pick up the pieces on Oa. I recently went through all of the Far Sector series – highly recommended, BTW, Jo is just as much of a badass character there, if not more – and seeing her resolve to save the other Lanterns was great.

Also, seeing G’nort of all people in the Quest force along with John and Kilowog and such was surprising. You would think with a character so inept that the Guardians would have just kept him in an empty sector where he can’t bother anyone.

I’m digging it. They’re giving him a sense of mystery with the whole “Ascension” thing, and I liked how they showed off some of his past via the sort of telepathy thing.

I get the feeling that Thorne is probably a Star Trek guy and his favorite Captain is Sisko, because I definitely see a lot of him in how he’s portrayed, both in characterization and in certain plot points. The scene of John dreaming of his wife (I’m guessing Katma Tui?) on the beach reminds me of the scene in the pilot of Deep Space Nine where the “wormhole” uses the scenes of Sisko’s past (including a beach scene with Sisko’s dead wife) to figure out humanity.

It was kinda funny seeing that because Simon’s flaw from his start as a GL was always that he didn’t fully trust having the ring and had the gun as a back-up plan. After a few years of growth and finally accepting he doesn’t need the ring, what happens? His ring and almost every other Lantern’s rings fail. I just imagine there are SO MANY “I told you so”'s off panel.