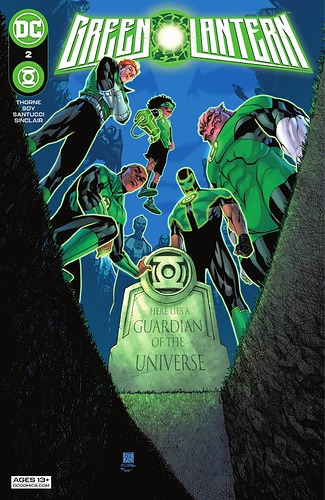 The guardian funeral was nice. Liked how the uniforms of present lanterns were all black. The speech was pretty good as well.

Love the idea of the giant ship. 1001 lanterns flying through space sounds like a great start to some good stories.

Dropping the Xanshi bomb on John was kinda brutal. And the battery exploding, dang. Things get real crazy fast this series. Excited to see where it goes.

First was the memorial that the female Guardian did for her brother Guardian. The way she talked about how life is neither created or destroyed, but changing and molding, how we’re all made from the same basic building blocks of life was really poetic and well made.

(That said, I can’t help but notice that soon after the Guardian was put in the battery, it exploded…

I also liked the scene of John talking to Keli before leaving Oa. I think it did a lot to help her sort of acclimate to this new status quo. I liked how John gave her a sense of responsibility by asking her to look after Simon. It’s rather clever, because you can see what Keli wants is some degree of automity and independence. Makes sense after all – she was able to do this amazing thing by creating this gauntlet, and has had experience as a hero in her own way. John validates that by giving her a mission of her own.

I would probably say how the Guardians just…suddenly shifted the mission of the Corps, with a third of the sectors being defuct, and many Lanterns moving to new sectors and responsibilities. It took down a lot of ideas that had been around in GLC comics for years, if not decades. That’s pretty ballsy.

I’ve read a couple issues of Far Sector (I plan on going through the series soon) and read her in the Future State: Justice League series, but that’s about it. She seems pretty dang cool so far, though.