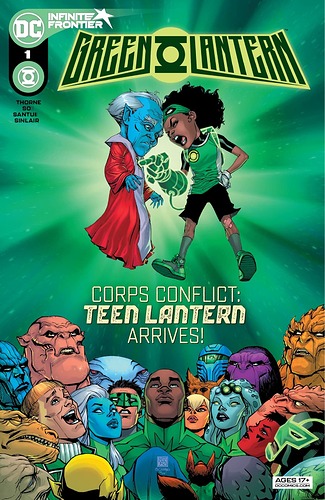 This series of posts is to discuss the latest issues of Green Lantern. Since this series just started, it’s a perfect time for anyone, unfamiliar or fanatic, to jump in. This issue can be read here.

I really enjoyed the beginning parts with John. It’s nice to see him during peaceful times as the leader of the corps. The guardians asking his input really shows how much respect he has earned during his time as a lantern.

Did not expect a guardian to get taken out. Especially in a way that seemed way too easy.

First time I’ve seen her. Gives me Simon vibes. Hot headed, refusing to give up their weapon. Gauntlet is pretty cool though. Reminds me of when Hal used a gauntlet for a while.

Not a “part” per se, but I think what I really liked about this issue is how it not just tied in so much past history without overwhelming the current narrative, but the rest of the cosmic side of the DCU that doesn’t often get to be part of things. I mean, we got Thanagarians, we get Colu, Gemworld, Sorceror’s World, the new United Planets. Everything feels connected and expanded and I think it has the potential to give the Green Lantern side of the universe a lot more to play with.

Well, for one thing, I was surprised at the mention of Hal to the Guardians that Kyle was patrolling the Vega system. I would think after the events of The Omega Men that Kyle would literally NEVER step foot in that sector again.

It was also surprising to see the book address the time that John was a Guardian during the events of the Green Lantern: Mosaic series. That’s a fairly deep pull you don’t get to see often from a book that is really hard to get nowadays, for understandable reasons.

Also surprising: there is yet another horrific being capable of mass destruction that the Guardians created that they kept hidden. You know, maybe Sinestro’s got a point about these guys…

I don’t know. There’s some mystery to her, which can be compelling, but there isn’t a lot of her as a character. Most of what we got to see of her is getting angry at various things. I did like the scene where she’s talking to the alien and how she’s not freaked out by him and calls it a “living wedding dress.”

First time I’ve seen her. Gives me Simon vibes. Hot headed, refusing to give up their weapon.

Huh, I hadn’t thought of it that way, but that’s pretty interesting. I’m guessing that’s why Thorne paired the two together – they can learn from each other and so on.