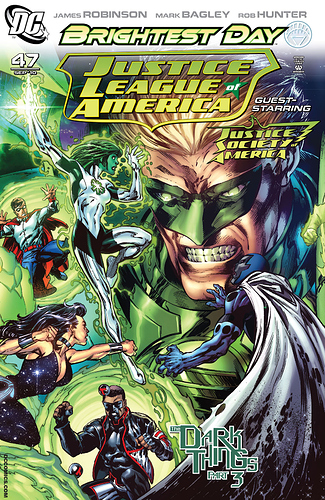 Was not expecting the Jade-Obsidian merger.

Do you prefer the Flash issues or the JLA/JSA issues?

Flash, but the JLA issue wasn’t bad this week.

I think I’d go with Flash #4 if not just for having one of my favorite cliffhanger resolutions I’ve seen in a while. Like, this whole story is about Barry being accused of killing this future Rogue/Renegade, and the third issue ends with the CSI guys finding Barry’s DNA on the Rogue’s body, which makes you think at the end, “Oh snap, is Barry going to be on the run from the cops as well as the Renegades?!”

Then you go to the next issue and immediately the CSI guys are like “Barry…you contaminated the crime scene!” Because of course that’s what they’d think, why would they think this hot shot police scientist apparently fresh out of Witness Protection (which, BTW, best way to explain away a hero’s long-standing death in a while) would have anything to do with the murder?

The construct boomerangs were surprising to see – I know that creators would flirt a lot with making Flash’s rogues super-powered like Flash, but I thought that started more in the New 52, not here.

Also, I’m curious to find out just what Iris’ crime that the Renegades hint about was supposed to be. I’m not sure if we ever find out, that might have been something that was dropped after Flashpoint became a way to bring about the New 52.

Well…considering that I’ve talked almost exclusively about the Flash issues and can hardly remember anything about the JLA/JSA issues, that should probably answer that.