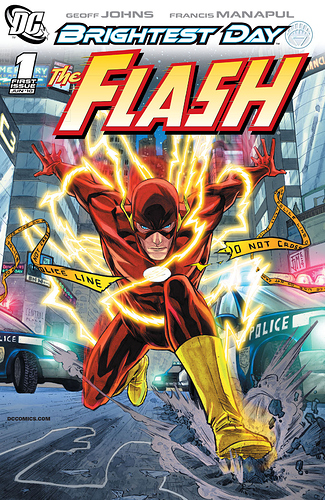 Also, reminder that Tuesday Jan, 5 is the Emerald Knights watchalong:

[image] Greetings @LanternCorps With the video content of DCU leaving soon, the future of watchalongs is hazy at best. Before they leave, however, we can enjoy watching Green Lantern: Emerald Knights together on 2021-01-06T02:00:00Z (UTC). For those not a part of it, feel free to join the Lantern Corps.

This was a good week. If I had to pick I think I’d go with the first Flash issue. Brightest Day was good, but Flash just hit me in all the right places. Plus the Flashpoint teaser at the end got me excited.

Deadman also failing to resurrect Don was something, but I think I’m more surprised that he’s even able to wield the white power at all. It’s also weird that the white light seems to not want him to resurrect people, which begs the question of, what even is the purpose of white light?

Really enjoyed them. From the future Rogues to Barry being a culprit for murder, it’s all fantastic. I think they did a great job setting up the city as this fast-paced scene where no one has the time to slow down. Perfect setting for the Flash.

Definitely the Flash issues. Hard to judge which one – the first issue is a great reintroduction, and the second has one of Barry’s more awsome speed feats in rebuilding an apartment bulding.

I forgot that Commander Cold and the Rogues from the 25th Century were part of this story. It’s interesting because this is something that will be around for a while, both in Flashpoint, and then in Josh Williamson’s run on The Flash.

It’s also funny that Iris doesn’t know about these guys because, fun weird obscure facts about these characters, but up until maybe the New 52, Iris West was actually born in the 30th century and should thus know better about such things.

I mean, this was my first real introduction to Barry as The Flash in the comics and he quickly became a favorite of mine, so…yeah, I think it does it right.