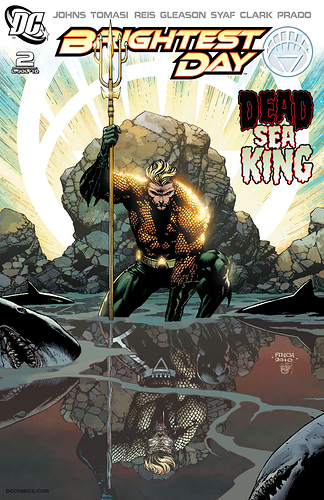 I actually really like the GLC issue this week. It’s done a great job setting up this mystery of what’s going on with the Alpha Lanterns. Excited to continue that storyline.

The Anti-Monitor being able to see No-Longer-Quite-So-Deadman was unexpected.

While the Firestorm arc is getting more interesting each issue, I think I’d still have to go with either Deadman or Aquaman. Probably Aquaman, because the crazy zombie sea creatures were what moved him from a joke to a serious hero for me.

I’d have to say #2 was my favorite from this list. I was more intrigued by the plot going on in GLC #49 but the savagery of #2 makes it the winner. I was surprised to see how brutal they got with the art. That whole situation with the family was a shocker. Nice little hart felt story with MM and the daughter of the scientist. Was also surprised with the whole death mask thing. Also, it seems a tad unlikely he’d be able to find all of their previous skeletons. Not sure one which ones revival I’m most interested in just yet, not Firestorm though. Defiantly enjoying the stories so far and have to say that GLC plot is cool, Space/horror kinda.

I think I would go with GLC. I thought the scenes with John and Boddika about the nature of her being an Alpha Lantern was very intriguing. Is her passion really being redirected, or is it something she’s saying because she was programmed to?

It was surprising to see the safety net construct that Deadman made after encountering the Anti-Monitor not only stayed, but the Weaponers of Qward now has it. That can’t be good…

It’s a hard one to say because having read the main series before I kind of know where things are going. Just going through these first three issues without context, I might say Firestorm. Not only for the mystery of what is going on with the Matrix, but also the personal drama of Ronnie basically partying and drinking himself into a stupor so he can forget what he remembers from Blackest Night.