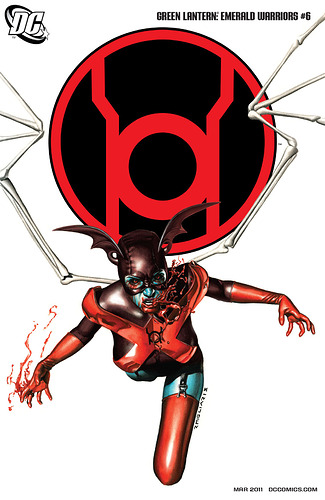 I guess GLC 56. Green vs Yellow is always fun, but Sinestro finally showing up and just walking through the Weaponer’s attacks was pretty great. It’s one of the few times that Sinestro seems to legitimately cause genuine fear in his prey.

I suppose I could believe Guy only telling Ganthet, since he’s wanting to avoid telling the others he’s still under the influence of that rage he almost killed them all with. But I can’t imagine Ganthet not letting the other Guardians know Krona, one they all locked up, was coming.

That said, I do like how it frames Atrocitus. He’s got the rage, but he also has his senses and can formulate plans and alliances. He’s surprisingly knowledgeable and wise for the leader of a bloodthirsty cult of people vomiting napalm blood.

I’ll go with #56 this week. It was fun to see so many Lanterns in one place.

Sinestro actually showing up was unexpected.

What do you think about Guy’s secret pact with Ganthet and Atrocitus?

I mean, it makes sense. We knew something was going on between them but the reasoning behind it pieced it all together well.