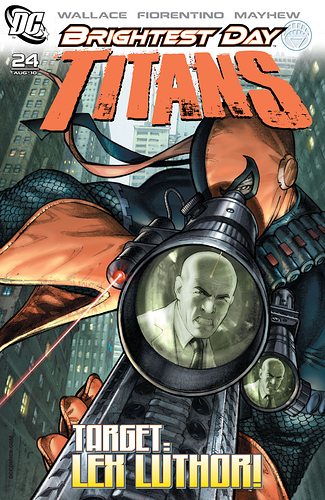 I thought all the issues we’re good this week. If I had to pick, probably Titans. The Lex/Deathstroke team seems crazy. How to see more of it.

Was not expecting the bodyguard to be done kinda shapeshifting killer. Not sure why the lack of heat signature wasn’t a dead giveaway of the Cheshire clone.

I think so. It didn’t expect you to know anything going into it, and it’s got some interesting setups that I’m curious to see play out.

But…Oliver comes of very well, actually decently written, the situation with the mysterious, Lost-like forest and the hint of his “Merry Men” sound pretty neat. This goes from a story I was kind of dreading to read to something I’m actually interested in.

As for Titans…eh. Okay, here’s the thing: I think Wallace here is trying to do a sort of Breaking Bad or Sons of Anarchy style of story, where you deal with the exploits of explicitly horrible people doing horrible things. But he seems to think you just have them do horrible things and it’ll work and doesn’t realize that the horrible people also have to be interesting. Factor that with a bland assassination plot I’ve seen hundreds of times and it was just a snorefest.

In Green Arrow, it was surprising hearing the names Isabel Rochev and Walter Steele as part of the Queen Industries plot – since soon after this story those characters would play key roles in the first season of the Arrow TV series. I didn’t realize they were from the comics or they came in so soon before.

I think so – I mean, it doesn’t explain everything that happened before, but it gives enough so that someone new can have an interesting hook to want to keep going.