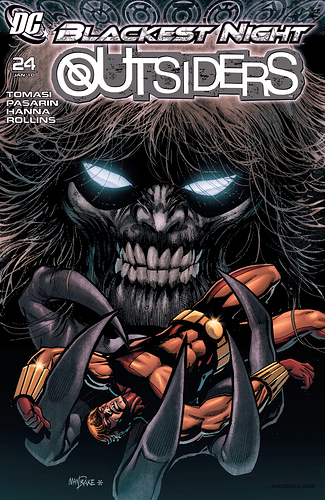 looks awesome. I need to get through this grad class this week and hopefully can catch up soon!

So, I’ll admit, my knowledge of the Outsiders is entirely limited to the Young Justice series. That being the case, I didn’t really know any of the characters, so I wasn’t too invested in any of them. I did enjoy 2 parts, though.
First, Halo being able to defeat Black Rings. Wasn’t expecting it, but enjoyed being surprised by it.
Second, the vision of what is coming. We’ve been growing anticipation about what happens when the power levels reach 100%, and now we know its name is Nekron!

Here’s just a quick rundown about the Outsiders:

Arsenal is my favorite Outsider by far! He is like Bat’s and Arrow with a dash of Cyborg. So freaking awesome!

Seems that this tie-in is for Halo only. Not sure what part the other Outsiders will play in this series.

Hmm…honestly, I kind of liked #23 most, not because the BN content was bad, but because of the unique team-ups and circumstances in the book, from Katana working with the Creeper, and Creeper then having to team up later on with Killer Croc. I kind of feel like the stuff with Terra kind of dragged way too much.

The Owlman was a surprise. I had to look him up because I never heard of an Owlman in this group before. Strange addition that honestly adds absolutely nothing.

Yep – I have read all of the original Batman & The Outsiders book up until Batman left, and I’ve read a few arcs of Judd Winnick’s Outsiders, as well as a couple of issues of the most recent book.