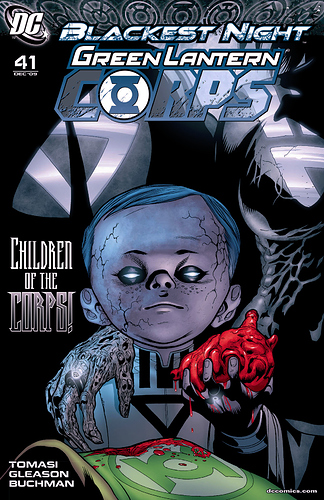 Batman issue was great. It’s hard enough to imagine going through losing your parents, but having to then re-live it through black lantern zombies.

Always enjoy Soranik being a medic. Under normal circumstances, she’d be saving wounded, but Blackest Night just keeps being an overwhelming force.
Killowog’s battle was surprising. Gotta commend him, though. Despite the emotional circumstances and the prodding from the Black Lantern, his only emotion was will.

Titans got pretty extreme there. Donna’s story through these issues has been nuts. Big fan of whatever is going on with Dove as well.

If I had to rank the side stories, I think I’d go Titans, Superman, then Batman. First two were close, and I’m not a fan of the Terra-Gar thing, but the rest of the stories were exceptional. Particularly in this week’s issue.

Honestly the only book that I really cared for this week was the GLC. Bats and Supes was good but GLC i thought was better.
Soranik battle with Jade was something. Plus the heart pull that was Kilowog’s battle with Lantern Emry.
Up to the point of Munk arriving. All great stuff.

Ok. Still trying to get caught up, but I’ll say that this was the best weekly reading so far for me. Every battle against the BL’s is on such a personal level. We learn so much more about many characters that have since been so well established (for instance the Robin’s by dealing with their parents).
The spectrum of emotions of each person, depicted by the artist/storytellers, adds to the them. I think that is what I like so much about the Blackest Night series. For me, early in the series how Killowog became the trainer to the GL’s, and later being confronted by a BL version of Emry (his GL trainer) about his past actions may have effected the universe during his own training, and seeing that his resolve over that time in his emotional spectrum is a great example of how a character has been more defined and refined with this series.
I am enjoying the Titans side story the most so far. Looking forward to the Donna Troy story line, as well as Dove/ Dawn Granger’s.
Also, I’m learning more about the Green Lanterns on a whole; which is in fact, the whole point of this exercise for me.

Sorry that I am so last in reading this one. Haven’t read these in 5 years. They’ve still as awesome as always. The Corps and the New Titans was the best for me. It’s interesting because the Batman story was my favorite then.
I will kept plugging along to catch up.

I think I’ll give it to Green Lantern Corps – really liked the moments of struggle and triumph for characters like Kyle, Soronik, Arisa and Kilowog.

Good surprise was Conner using his tactile telekinesis for the first time in ages. It was surprising because I didn’t realize he hadn’t been using it in a while. I loved Superman’s shocked and kind of annoyed reaction, like “You have a power, use it!”

Not-so-good surprise was Donna squishing her little baby’s head. It kind of epitomizes that bad, edgy nonsense that Titans had been for a while during this time, especially since it hardly did anything to advance the plot. It was there only to shock.

Hmm…again, maybe a little biased, but I would go with Batman’s. I think it did a lot of great character work for Dick, Tim and Damian, while having some fun action including Etrigan.