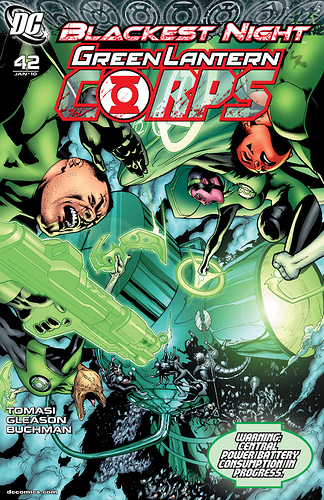 Does anyone have all the blackest night hardcovers? I own all of them and I think I also have the prelude and red lantern trade paperback. Thing is I think some of them have the same books in them but I’m not sure. Also I think some of the tie ins are left out of the hard covers. Anyone know?

I think Green Lantern Corps was my favorite this week. With Wonder Woman a close second.

I have some knowledge of Blackest Night but I didn’t know that Kyle dies. I wasn’t expecting that.

Meanwhile, back on Oa, what’s your favorite panel from the battle for the central battery?

Either the panel where all the Black Lanterns are heading towards the Battery or that final page.

These issues this week were great. Green Lantern Corps was an emotional one but also beautiful. I’m not a big Wonder Woman fan but I liked her issue too. Everyone seems to be battling the Black Lanterns in graveyards though… they might want to try a new approach.

JSA had way too much going on across too many unknown characters for me to follow along. I enjoyed seeing Alan Scott and Jay Garrick, though. Also, having the Black Lantern Lois and Dr. Fate stories get referenced was a nice touch.

Green Lantern Corps was definitely my favorite this week. Favorite part was Kilowog coming to terms with all his trainees that have died. The giant black construct was also amazing.

Wonder Woman was a good issue. It was easy to jump into and did a great job showing off the love Diana has for people. Also, the comment about Atom being so compassionate. Almost like there’s some foreshadowing going on…

I’m gonna go with the Wonder Woman issue as being my favorite this week. If you have ever been to Arlington cemetery you understand just how many grave sites that are there. It was very unsatisfying to me that she had to lay waste to them all. Bringing the soldiers that stand watch into the story at the tomb of the unknown soldier was solid as well. Very real life places and feelings.
I will agree that Kyle’s sacrifice was the most surprising thing for me. Seemed that the Indigo tribe are ahead of what is happening and are becoming the leaders in this fight, and it also looks as if the Red Lanterns, if Vice was any indication, have an overwhelming propensity to laying waste to the Black Lanterns. Too bad he didn’t get more of a chance to do so. Those dang Alpha-Lanterns; always protocol first.
As far as the JSA issue goes, I’m not sure what they are trying to accomplish. I’m probably being to harsh but it was just a lot of chaos. The Damage storyline, for me, is the most intriguing, but mostly because of his heart snatched death by Sue in front of The Atom in an earlier issue.
I found this panel entertaining, not the best drawn, but entertaining, nonetheless. 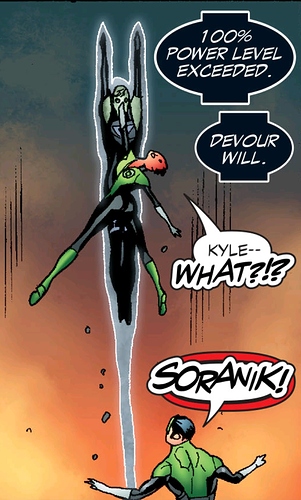 Amazing that you have this collection! I’d like to own the full story line. As for what might be missing, I just don’t know.
You can scan through the full storyline here to see if you are missing anything in your collection by comparison.
Blackest Night
For the prelude into Blackest night check out
2005 Green Lantern #39-42 and
2006 Green Lantern Corps #31, #33-38 But seriously, you could go all the way back to 2004 Green Lantern: Rebirth in the very first issue and see this arc start to unfold. (The genius of Geoff Johns in full display)
Also since reading through this I discovered there are a few tie-ins that aren’t included. I’m not sure why. It may be that when the Blackest Night full storyline was assembled on DCU, that they may have been overlooked because they are standalone comics with no second part, or more, like the other arcs; such as JSA 1,2,3 or Wonder Woman 1,2,3.
Weird Western Tales #71 (I haven’t found how it ties into the main storyline, yet still a Blackest Night story)
Phantom Stranger #42
The Atom and Hawkman #46 (Both PS and TAAH are relevant to the story, and don’t know how they were left out of the full story arc)
And then a couple of post Blackest Night books
Action Comics #890
Untold Tales of the Blackest Night #1
There may be more but I haven’t found them.
I don’t know if this is of any help but just wanted to share what I had found.

Everyone seems to be battling the Black Lanterns in graveyards though… they might want to try a new approach.

I’m definitely going with Wonder Woman. I thought it had the most interesting hook, and while I feel like Rucka’s runs on Wonder Woman are a bit overrated, he has her character and voice down pat in this story.

Also, I got a horrible laugh out of Lord’s “All aboard the Ted Kord Express!”

Initially, I was surprised to see that the JSA mini was in a sense a continuation/sequel to the Blackest Night: Superman series. I guess it shouldn’t have been that surprising, since it’s the same creative team, but it was a cool connection, one of those things that makes reading these big superhero crossover events fun.

But overall, yeah, I’d definitely go with Kyle’s death. I mean, I know he doesn’t kick the bucket for long, since I’ve seen him alive in stories after this and, y’know, comics, but still!

Hmm, going further with the Kyle stuff, his last stand was really well done. Them taking the Red Lantern out of his sciencell was also not just clever, but goes to show just how desperate the situation is.