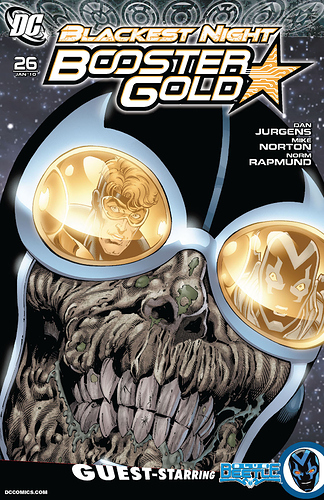 So, I’m a couple weeks behind in these readings but I’m going to try and catch up this week. (Someone hold me to that.)

Good reads of some characters that I’m not as familiar with as I’d like to be. Just about all I know of the Doom Patrol is due to the 2 seasons of the series here on DCU. There were just too many moving parts for Doom Patrol for me. I’d need a little more back story on some of the returning dead to know what all is going on there. There was one thing though; I was curious about Cliff fighting against himself. In most every instance the black rings download the corpses memories before taking over a body. If Cliff is in possession of his brain, meaning it’s still alive, how could the ring download it? (things that make me go ‘hmmm…’)
As for Booster Gold, I first learned of him in Justice League Unlimited, but I do have a little knowledge of his backstory and the Beetles as well. That being said I enjoyed both the Booster Gold reads. The writers did a great job of linking Booster and (Ted Kord) Beetle. It was solid from the funeral to the pranks they played on the JLA. I will, at some point, have to dig into the Booster Gold comics a bit more. I wasn’t aware of the family dynamics that are going on there.
One of the best things about reading Blackest Night, with all the tie-ins, is it gives the reader a chance to learn about so many characters and their relationships.

Same here, but I enjoyed the more light-hearted nature of the issues. Was a nice break from the bleak outlook and constant defeats surrounding the rest of the DC universe during Blackest Night. Also, Niles being constantly pegged with avarice helped me understand his character more. It keeps seeming like the victims are mostly fear, occasionally rage/will, rarely hope/love/compassion, and pretty much never avarice.

As for Booster Gold, I really only know of him from a couple animated instances (which I think I only took a liking to him because the voice of Skeets was Futurama’s Fry) and the Heroes in Crisis series (and to a lesser extent the DC MMO, DCU Online). I do enjoy the Booster-Beetle companionship, and maybe I’m more like Booster than I’d care to admit, but I really empathized with his portrayal during the funeral.

I also appreciated the positive outlook at the ending of the Booster issues. I suppose the ability to time travel really helps shake off the initial shock the Black Lanterns thrive on. If anything, it almost seemed too easy for them to win. However, the last bit in Coast City was pretty ominous.

That’s a great point about Niles and his avarice “aura”. Everything I knew of him was that every member of Doom Patrol was there because of his own self interest.

STOP CHECKING REPLIES, AND GET BACK TO READING COMICS!!!

I feel much the same. For me, it’s going back to characters I’ve not put thought toward recently. I do love Booster / Beetle combinations. As far as the memories, I think we need to go with the “suspension of disbelief” principle here, and assume the ring is pulling their memories straight from their DNA. Face it, some of these corpses were in rough shape, a head blown off is a small thing when we’ve seen a Black Lantern grow back from the finger left in the ring. I say, just this once, we need to swallow our logic, and common sense, and ride the wave.

I’m all caught up now!

This week’s issues were great. For similar reasons as everyone else, I liked Booster Gold better. Doom Patrol had a lot of characters that I didn’t know. All my Doom Patrol knowledge is from this DCU show. Booster Gold I know a bit more about and I just read 52 recently, so I knew most of the support characters in his series.

One thing I have enjoyed during this whole series is the colors and showing of emotions from the Black Lantern point of view. It’s a gorgeous way to show emotion and move the story along.

Good point about the Black Lanterns. It kind of went by my unconscious, but when you say it, I go back and can see that it had real impact on the story.
P.S.

Now that you’re caught up on your reading, you can have some free time, but don’t let it happen again.

Thanks for keeping me honest! I’ll keep up on my readings now!

I think I would go with Booster Gold #26, mostly for the funeral for Ted Kord. It was so well done, really got into the head of Booster and accurately summed up that era of DC history.

It was funny/interesting to see how last week (for lack of a better term) we had…an awkward treatment, to say the least, of women characters in Justice League of America, and then we have a similar sequence in Doom Patrol which I think just worked SO MUCH BETTER. While it felt really off-character for Tempest, I thought it worked better because it played stronger with Rita’s actual history as a character, and Rita as a character was portrayed far stronger than the other women in the previous two-parter.

Also, in terms of crazy Black Lanterns and their confrontation, seeing Robotman battle against Cliff Steele was very surprising, and sure to haunt the character for a while in this series.

Finally, while I knew that Rip Hunter was the son of Booster Gold, I was surprised to see it revealed here, and that the readers didn’t find out the same time that Booster did.

In terms of Blackest Night tie-ins, I’d go with Booster Gold – which was very surprising to me because I’m normally not a big fan of Dan Jurgens as a writer.

In terms of series in general, I’d go with Doom Patrol. It’s been a while since I read any of this, but it was very good at combining all the eras of Doom Patrol and taking the characters forward in different, interesting ways.