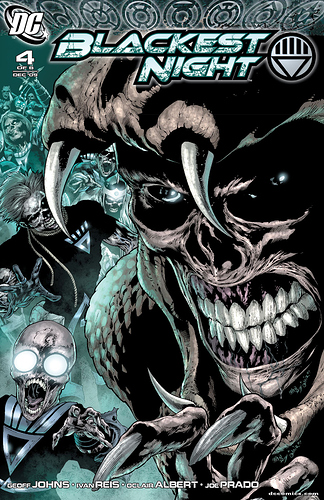 Blackest Night #4 was my favorite for week 12. Watching Barry take charge of what’s going on Earthside was awesome!

Absolutely loved his dressing down and then building up of Ray and Mera. Then spreading the game plan the other defenders of Earth. 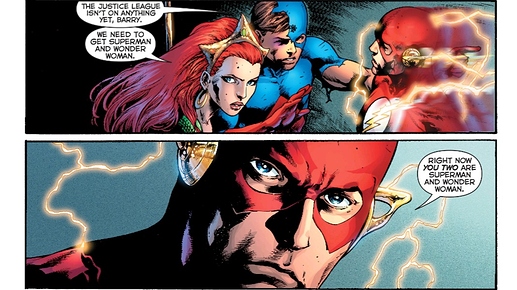 I also felt for Ray and his exchange with Damage. The horror he must have felt when Jean showed up and power levels hit 100%!

Liked the JLA stories for the Doctor Light showdown. Kimiyo was so hot that she burned her own clothes off!!!

Loved BN#4. So many amazing panels, everything coming together, hitting 100%, a plan finally starting to emerge, this happening: 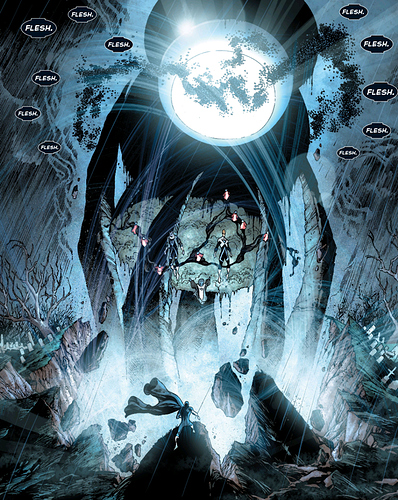 Flash was a good issue. Outrunning the regeneration is an interesting idea. And Barry trying to suppress all the emotions gets me. Probably because of The Flash TV show, which is the only reason I know some of the characters mentioned.

JLA issues were pretty heavy. Even without being familiar with their backstories, the black lanterns were ruthless!

You’re right, they were heavy. Though it wasn’t written in, I can’t imagine what Zatanna had to do to put her father down.

My favorite story was Justice League of America. I just could not figure out how they were going to survive. Then Dr. Light burned them up, that was perfect. Having to pick who I would be afraid of most I would pick the old Black Lantern Rouges. I think that the Flashes can handle Black Lantern Reverse Flash in numbers alone, but Rouges vs Rouges will be tough.

I think I’d go with Blackest Night #4. It had forward momentum in the story and while the dialogue did veer into “let me explain my motivation to you,” I did like the dynamic of slightly smaller heroes like Flash, Mera and The Atom taking center stage.

The Flash issue was pretty good too. It was interesting seeing Barry try to contain his emotions while dealing with the fallout of him still being fresh from his resurrection and not knowing everything.

I knew from reading this stuff previously that I was not going to like the stuff with Dr. Light in this book and was kind of dreading it, but JEEZ, I forgot just how freaking awful and gross this two-parter was. Like, it is seriously one of THE worst Justice League issues I have ever read.

I was recently talking about this over in the General forum when someone asked about the problems with Identity Crisis, and I talked about how the sexual assault of Sue Digby wasn’t just bad for her character, but for Doctor Light as well. What was once a semi-forgettable joke of a character became something profane and gross and just unpleasant to see.

I knew I was going to be grossed out by Light touching and harassing Kimiyo as well as him tearing apart her costume, but I wasn’t ready for the pages upon pages of him running his decomposed lips about Japanese culture. Like, after a certain while you wonder how much of that was Light talking and how much of that was James Robinson talking.

And it wasn’t just Kimiyo – Gypsy and Vixen got the same treatment too by Commander Steel and Vibe! These two issues were literally NOTHING but a group of guys beating, humiliating, and ridiculing women. Whenever people talk about how these Big Two mainstream superhero comics can be repellant to women, this is what they’re talking about.

Of course, the argument to this would be, “but the women do beat the men at the end, so it’s not that bad, right?” And…I guess? I could see that’s probably what they were going for. After all, there is a history in horror cinema (and in comics, really) where women exploitation was a vehicle to deliver an underpinning message of women empowerment. But I just don’t think they succeed here at all.

…Wow, I went off WAY longer than I thought I was! And to be clear, after looking at some of the comments here, I’m not going to say anyone is bad for liking these issues. It just didn’t work for me at all.

Probably the Rogues, because it looks like Reverse Flash has all the Black Lantern stuff AND his super-speed, which is just way too OP to consider having to encounter.

Wow, I went off WAY longer than I thought I was! And to be clear, after looking at some of the comments here, I’m not going to say anyone is bad for liking these issues. It just didn’t work for me at all.

I can agree with your points. While I can’t say for sure what the motivation behind the writers was, I can say it did a great job making me horribly uncomfortable, which I think was the goal. IMO, it’s exactly what BL do; extreme words and actions that will trigger bursts of emotions. I’m still not sure they chose the best way to go about it, but as someone who was entirely unfamiliar with the JSA, it definitely set up the characters for readers that never heard of them.