As of now, kryptonite still has no origins. All that is known about it is that it originated from Krypton and come in a variety of colors and each color variant of kryptonite has a different effect on kryptonians. However, it is also very well known that Kryptonians could never have lived to see Krypton’s destruction die to how harmful the kryptonite is to them, which means that the harmful kryptonite could not have actually been on the planet with enough of it to be directed into a time rift and toward Earth and still cause a rain shower of kryptonite meteor significant enough for their to be as much as their is on earth.
I think it would only make sense if it originated from Krypton but was never harmful to kryptonians untill Superman’s arch nemesis, Lex Luthor, used it to figure out what Krypton was like and why Superman is as powerful as he is, eventually using and turning kryptonian mereors into the colored variety of kryptonite, each color being a different version, green being a fusion of blue and yellow kryptonite, blue being what takes his powers away and yellow being what hurts him. This would also explain why Lex Luthor was the one who named it kryptonite.

V0. Periwinkle kryptonite could be the original miniral that was native to Krypton and forms from the former acids of Black Mercy plants and basis for the development of all other kryptonite developed by Lex Luthor after he found out how it reacted to Superman’s biology, making him suddenly loose all sense of interest, which he found could be beneficial to him.

V1. Silver/White kryptonite could be the first stage before getting color with the effects similar to that of Cannabis on a human being. Those affected by it experience a loss of inhibition, altered perceptions, extreme hunger cravings, and some psychotropic hallucinations.

V2. What makes the kryptonite red could be what increases Kryptonian emotions, making them easily enraged.
V3. Pink kryptonite could be an unstable form of red kryptonite that starts reverting back to the original white state that makes kryptonians aphrodisiac and temporarily give humans the needed kryptonian abilities to survive on a Krypton like planet.

V4. What makes kryptonite blue could be what weekens kryptonian and gets rid of all solor energy which their powers work off of and gives them enough energy for super human feats and makes kryptonians euphoric.

V5. Black/Purple kryptonite could be a fusion of Blue and Red kryptonite that causes paranoia and erratic behaviors and causes kryptonian powers to become unstable.

V6. What makes kryptonite yellow could be what makes kryponians sick, forcing their powers to become heightened (developing new ones with prolonged exposure).

V7. Orange kryptonite could be a fusion of yellow and red kryptonite that has no effects on kryptonians and unlocks meta-genes in all other creatures and is radioactive.

V9. Brown kryptonite could be a fusion of all the 3 main colors of kryptonite that will make a kryptonian’s entire molecular structure duplicate itself, creating an imperfect clone (Bazaros). 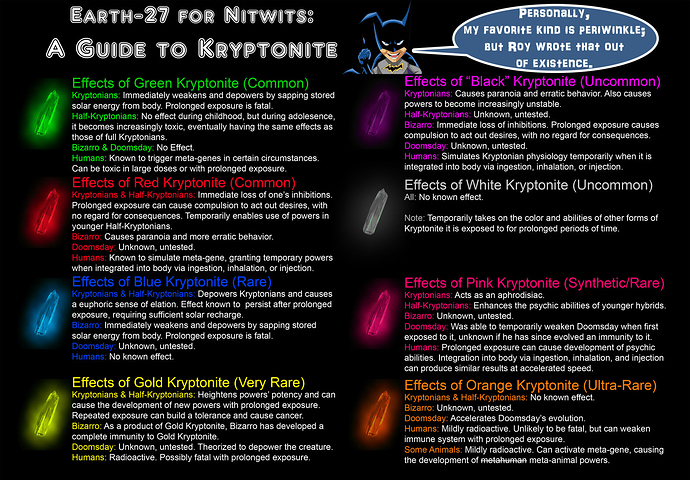 You have a mixture of krytonite lines here; white kills plant life. Periwinkle I believe is a non-canon form. Things change and I admit I haven’t kept up with them.

While the origin of Kryptonite could change with universes, the silver age version makes most sense to me - the formation of Kryptonite took a long time.

Looking at Argo City the formation of Kryptonite was a gradual process after Krypton’s explosion which allowed the survivors time to coat the city in a shielding layer of lead.