Well that didn’t take long! Just 24 hours after the second utility vote ended the third Bat Cowl Comic Book Vote has begun! This time we get to pick what Batman will look like in the comic book! 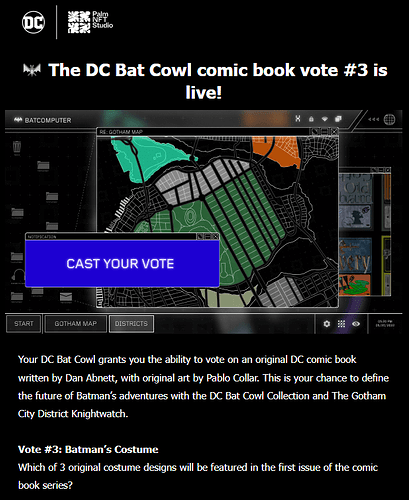 Artist Pablo Collar has created four original designs for us to choose from and one of them will be the look Batman has in the upcoming Batman/Bat Cowl comic book! This vote is very subjective - you like what you like and sometimes there’s no reasoning behind that other than gut reaction. That said I’m going to go through the four options and point out the differences/unique features that I see. If you notice other design features I missed please comment below! 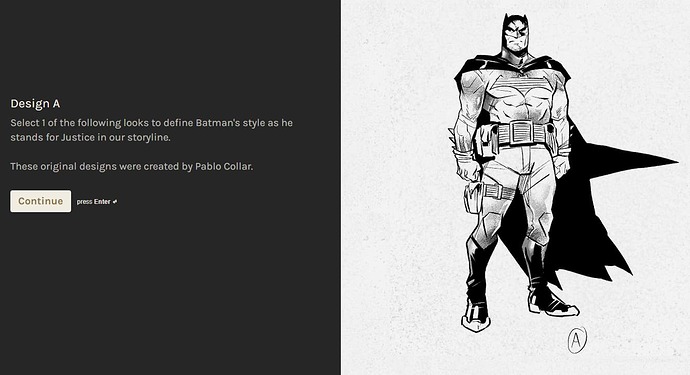 As you’ll see in the remaining options the build of Batman is the same in each and the cowl appears the same as well. The differences are in things like the Batman symbol on his chest, the utility belt, his boots, his gauntlets (gloves), etc.

Let’s go from the top down. The first unique feature of this design is the Batman log on the chest. In this one it’s an outline of the Batman logo with a pattern of horizontal stripes across it. That pattern is repeated on his utility belt and leg holster. To my knowledge this is a new design of the Batman logo that has not been seen/used in Batman comics before. There are only three points on the bottom of the logo - the middle and the bottom of each wing. It’s very wide and has four points on the top - the ears and the tops of the two wings. That’s not something I remember seeing before and a look at this history of Batman logos indicates that if we were to pick A we might be creating a new Batman logo that has never been seen before! So cool! 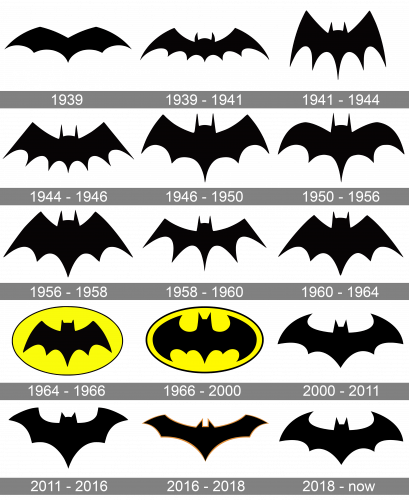 The utility belt is large indicating it can carry a lot and/or some heavy stuff. The gauntlets are muted a bit in this one with baggy gloves covering the hands but still the iconic fins going up the back of each forearm. He has a leg holster on the right leg with more utility and his boots are knee high with what appears to be reinforced toes and heels. 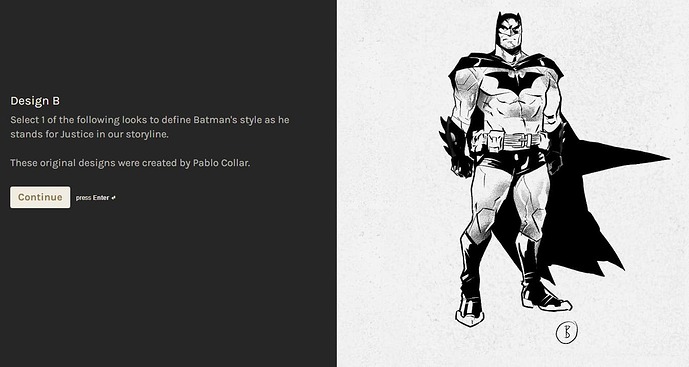 This one has a very prominent, dark Batman logo on his chest that reminds me of the Batarang. Sharp edges, clean design and because it’s solid black it pops against the light color of his suit and grabs your attention straight away. The utility belt is less prominent and he has no leg holster so presumably he’d be able to carry much less in this design. The gauntlets are one piece, look intimidating and go all the way up to the elbow. Great protection for his hands, wrists and forearms but perhaps at the expense of mobility. The biggest difference in this one is that it’s the only one of the four designs with different colored shorts/pants. This is more the traditional look of Batman with black “shorts” for lack of a better term - something that was part of his costume from the very beginning. The boots appear to be the same as they were in Design A.

Once again we have the iconic Batman logo on the chest but as was the case with Design A it is just the outline. It doesn’t appear to have any color or pattern to it but it is a different style of Batman logo. This appears to be very similar to the current Batman logo only as an outline rather than a solid black (see chart above).

Once again we have the large utility belt and the leg holster so Batman would be well stocked for anything that comes his way. Going back up, though, he has shoulder armor in this design! Armor on his kneecaps as well! This Batman is expecting battle!

The gauntlets appear to be separate from the gloves again but unlike A these gloves appear more sturdy and heavy duty. The boots appear the same here as they did in A and B. 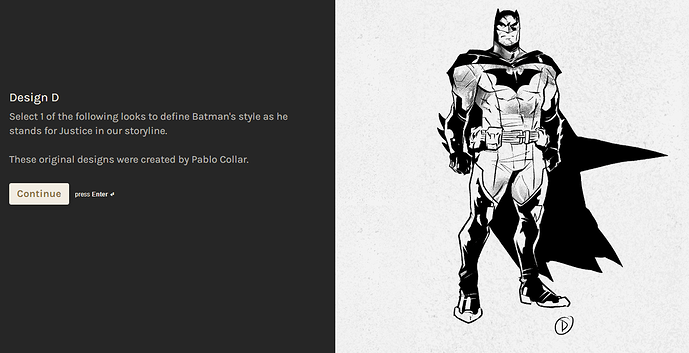 Finally, we have Design D. The Batman logo on his chest appears to be the exact same as it was in Design B and, checking the chart above, appears to be the New 52 style of Batman logo. There does not appear to be any shoulder armor in this one but the gauntlets are much more prominent and go beyond the elbow to cover some of the upper arm, particularly in the back of the arm. These gauntlets and the Batman logo on the chest would make a very imposing figure for criminals.

The utility belt is small, like it was in B, and there is no leg holster so again he would presumably be able to take less with him and have less weapons/options at his disposal. The boots are different here for sure going well beyond the knee to cover most of the thigh and on the sides they nearly reach his hips. They still appear to have the reinforced toes and heels.

When you combine it all this Batman looks like he would be the most protected of the four designs and would present a very imposing figure in each panel.

Verdict:
Again, this is very subjective but I cannot pass up the opportunity to be part of a project that brought a new Batman logo into the DC Universe. I am voting for Design A because introducing a new logo that would become canon is too good to pass up. I also like that design in that he has the leg holster and thick utility belt so his options in the field would be numerous (which is always fun to see what he pulls out to get himself or his allies out of a jam) and the gloves being minimalistic gives the character a grittier feel. This Batman looks like a brawler who has a lot of tricks up his sleeve.

What are you voting for? What did I miss? Let me know in the comments below!

The results are in! 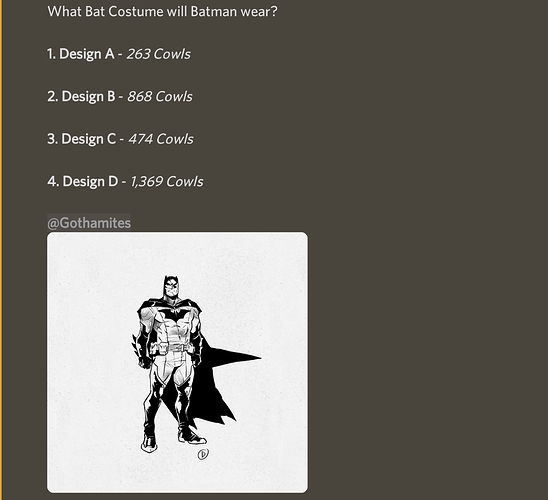