The second vote for the DC Bat Cowl Comic Book is live and this will be the last time I refer to it as that because this vote is to select the title of the series! This is your final warning about spoilers as I am going to be posting screenshots of all the options so if you don’t want to see them before you open up your email stop reading now!

Ok, let’s get right into it because time is of the essence. As was the case for the first vote all Bat Cowl holders should have received an email inviting them to vote on this topic. 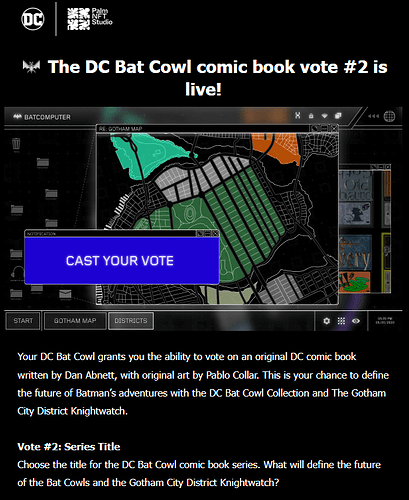 This time we are voting on the series title for a Batman comic book that will be released in stores this fall! What a fantastic opportunity for us and as far as I know this is unprecedented in DC comics history! This comic book will become canon and part of Batman’s legacy and we Bat Cowl holders get to decide what it will be called! Stuff like THIS is why I got involved in this project and I am thrilled to be here! Let’s get to the options! 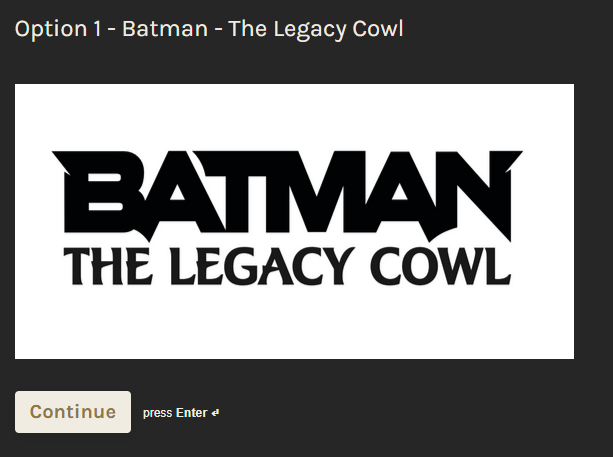 Pros: This is a bit of an inside reference as Matt Mason, the head of the project for Palm NFT Studios, has continually warned/advised us Bat Cowl holders to “Protect the Legacy”. This seems to be a reference to that or at least would lead the story in that direction. The reason I put this as a pro is that it’s something Cowl holders will get, will appreciate and that will resonate with them.

“The Legacy Cowl” also implies that either the story will be about a cowl that has been around for a long time - perhaps since Batman’s beginnings in 1939 - or that a new cowl will go on to have a legacy in the Batman world. Maybe that is all part of an upcoming vote? Who knows but this one gives the story some heft in that it references the legacy and the cowl, one of the iconic pieces of Batman’s uniform.

Cons: I am not sure how much traction this will gain with people who do not own Bat Cowls or are not familiar with this project. There are a lot of Batman books in production both currently and in the future and if I didn’t own a Bat Cowl and saw a book titled “The Legacy Cowl” I don’t know that it would grab my attention enough to get me to purchase it or read further. I know the saying is “don’t judge a book by its cover” but as a comedian said, that’s why books have covers. That’s why stories have titles and I don’t think this would grab me upon first hearing it. 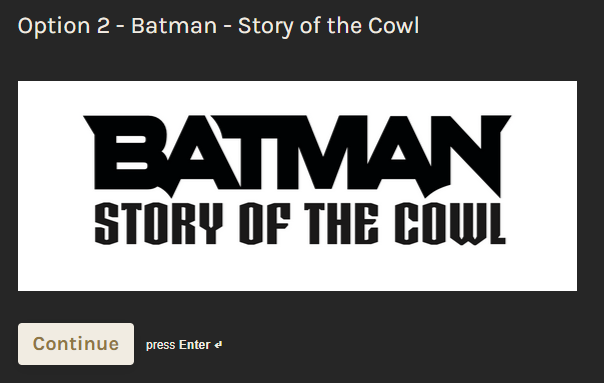 Pros: Again, a nice nod and reference to the Bat Cowl project and this title almost makes me think it would take the story into a historical tense with a look at how the Bat Cowl became a part of Batman’s uniform, what it’s functions are beyond masking his identity, how it is made and more. This could become a book about how all our Bat Cowls were made, why and how Batman envisions them being used. That is intriguing and there’s a definite place for the esoteric, deep dive into the minutiae of the iconic characters we know and love.

Cons: Much like option #1 I don’t think this would intrigue me very much if I weren’t a Bat Cowl holder or familiar with the project. Why would I pick this up instead of ‘Detective Comics’, ‘Batman’, ‘Batman: One Bad Day’ or ‘Batman: Dear Detective’? If I go to the store with a budget and see those options on the shelf this fall I’m not sure ‘Batman: Story of the Cowl’ is going to make my pull list.

This also feels boring to me. “Story of the Cowl” sounds like a history lesson on the cowl and that doesn’t excite me. I’m a part of this project and this title bores me - that’s a bad sign for how the general public would react. 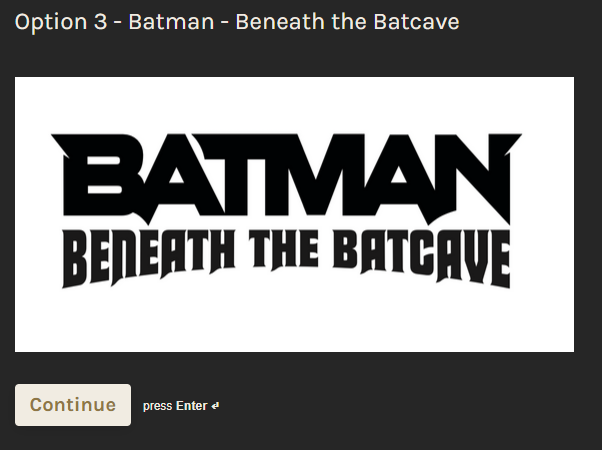 Pros: This one is just flat out intriguing. We all know that underneath Wayne Manor is the Batcave but have we ever, in over 83 years, known what was beneath the Batcave? This is an opportunity to establish new canon that could reverberate in Batman comics forever. If this is literally about what is beneath the Batcave it would establish a precedence as part of Batman canon for the rest of his time as a DC character. From then on there would be Wayne Manor, the Batcave and (whatever this story reveals).

Cons: What if my literal interpretation is wrong? What if this is not in reference to what is literally beneath the Batcave but something else? And if so, what else could that be? While I think this is the most intriguing of the three options it’s also the most limiting in a way as it could confine much of the story to the Batcave and/or Wayne Manor.

Misc:
How does this title work with any of the log lines we voted on last week?

To refresh your memory: 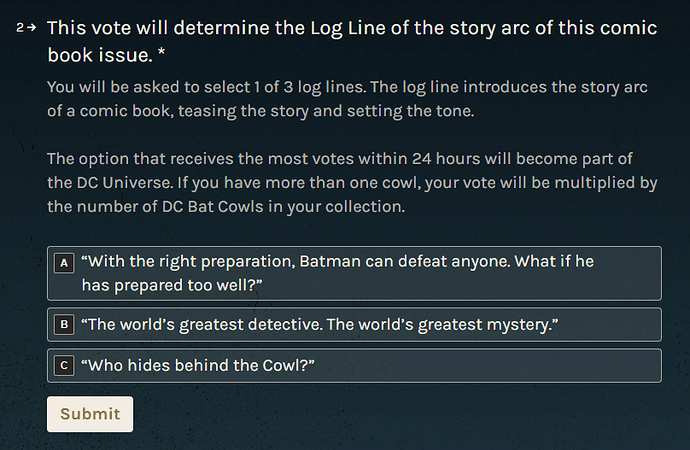 We don’t know what won that vote and that’s a shame as it would really help make this decision. Let’s go one by one:

BATMAN: THE LEGACY COWL
“With the right amount of preparation, Batman can defeat anyone. What if he has prepared too well?”

BATMAN: STORY OF THE COWL
“With the right amount of preparation, Batman can defeat anyone. What if he has prepared too well?”

BATMAN: BENEATH THE BATCAVE
“With the right amount of preparation, Batman can defeat anyone. What if he has prepared too well?”

It could work with option #1 and #3 but I don’t think it works with option #2 at all. If that won I would not vote for option #2 because it wouldn’t make much sense. How is Batman’s overpreparation the story of a cowl? I also don’t think that combination would grab anyone’s attention in the advanced solicitations.

I don’t think that works with either option #2 at all. It could work with option #1 if the legacy cowl is part of the mystery but I really think it works best with option #3. We know the Batcave is part of Batman’s story and character and we know Batman is the world’s greatest detective. But if what’s beneath the Batcave is the world’s greatest mystery that could be pretty cool!

BATMAN: THE LEGACY COWL
“Who hides behind the Cowl?”

BATMAN: STORY OF THE COWL
“Who hides behind the Cowl?”

BATMAN: BENEATH THE BATCAVE
“Who hides behind the Cowl?”

If this was the winner of the first vote then there’s no way I’d vote for option #3. It wouldn’t make any sense at all. It would be confusing, would look like a typo or a mistake - it would be an awful combination in my opinion.

It would work well with either option #1 or option #2 and I think option #1 would be the best fit. It would sound, to me, like there was a legacy cowl being worn by an unknown vigilante or maybe even a villain and that’s intriguing. That makes me want to read more to find out what the legacy cowl is and who is wearing it.

My vote: Man - this is tough because I really think it comes down to what won the first vote. I’m going to wait a while to cast my vote in hopes that I can coax that information out of the team.

What do you think? Which one would you vote for and why?