So much has already been decided for the comic book we Bat Cowl holders get to vote on and yet so much remains to be decided! Let’s take a look at what we’ve already decided:

What’s next? Well - before we get to that let’s recap what we know about the plot for our book as told to us by Jim Lee himself back on May 17th:

“Batman has perfected his Batsuit and he’s got a variety of different suits for different occasions to really press his advantage in any sort of situation. So this idea that he has modified different Bat Cowls for different purposes and actually taken one and added AI to it. Basically got to a certain point with it, wasn’t happy with it, put it away and then finds out one day that someone has broken into the Batcave and stolen that cowl. And so it’s a mystery storyline where the readers have to figure out, alongside Batman, what happened but also as participants in this program really provide direction and guidance to the storytellers.”

Sounds pretty cool! We now know that Brainiac is the one that stole the AI enhanced cowl, aka The Legacy Cowl, and now it’s up to us to determine what The Legacy Cowl looks like! We were presented with a plethora of options, all original designs by artist Pablo Collar, and there’s a LOT here so I’m going to give gut reactions and insights from what I can see. Let’s get right into it! 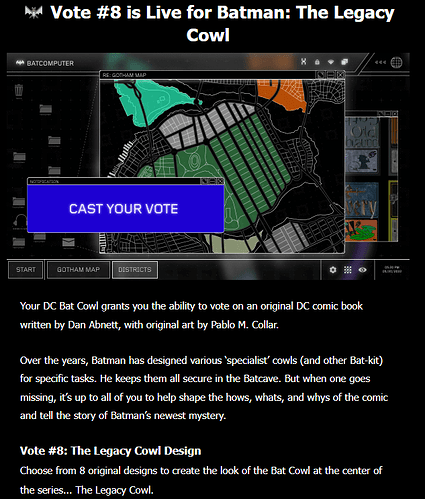 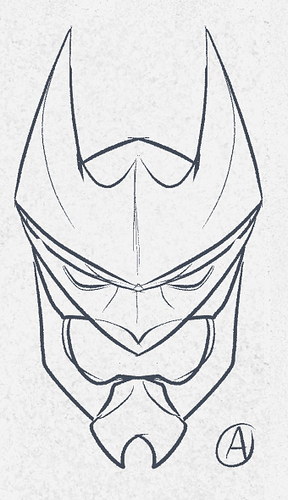 This one immediately made me think of Aquaman - I think the chin piece is definitely inspired by the recent Aquamen comic:

It’s aerodynamic and I like the Batman look to the ears/forehead and the reinforced jaw as well. Looks like it could sustain quite a bit of damage and come back for more - seems rugged and sturdy. 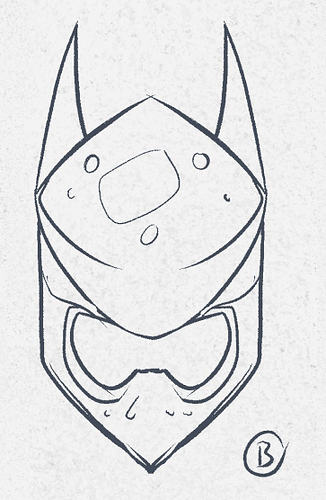 What the hell is this?!? It looks like a cowl made of swiss cheese. It’s got the reinforced jaw and the bat ears but there appear to be no eyelets so…how would Batman see in this? I guess it’s AI enhanced so he’d theoretically have sensors to tell him what is around him and perhaps there’s a LOT of computer software in there. I don’t know about this one. I’d love to hear from Pablo Collar on what the thought process was on this one. 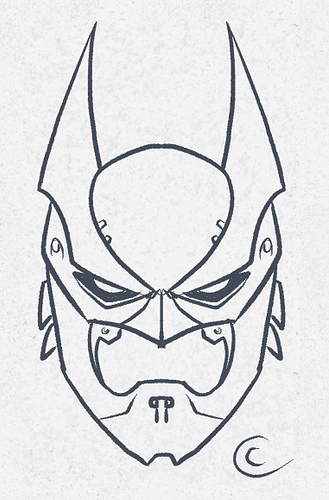 This one looks pretty cool! It has some flares to the sides that look sharp which could come in handy in a fight up close or to potentially cut a restraint. The ears being connected to the eye signal is awesome - very cool design feature. I’m not sure what is on the “soul patch” for lack of a better term but this almost looks like a cowl on top of another cowl and looks very sturdy, very cool and very badass! 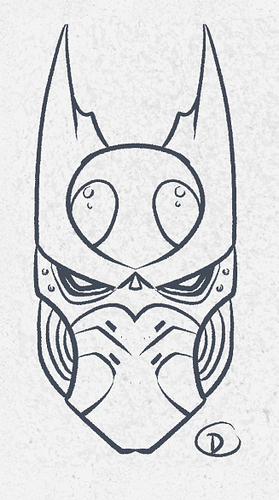 This one looks alien! There’s no opening for the mouth at all, appears to be reinforced eye protection as well as reinforced jaw protection. The ears are very unique in the tiered design and there’s something on the forehead/crown but I’m not sure what it is or what it could do. This is VERY cool looking and incredibly unique and intimidating. Batman wearing this would be ready for battle on any planet and if you saw that coming out of the shadows with bad intentions you’d know you were dealing with a serious threat! 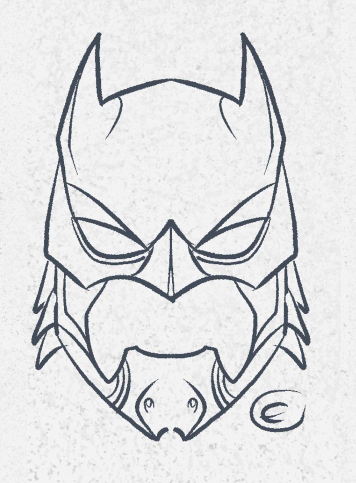 As was the case earlier it appears we have some sharp edges along the sides and I still like that feature. Lot of potential utility there. The ears are low profile, which I personally like, and once again the jaw appears reinforced while still lacking an opening. The overlap under the signal and towards the mouth - the mustache for lack of a better term - is interesting. Not sure what the function of that could be but it definitely gives this cowl a unique look. 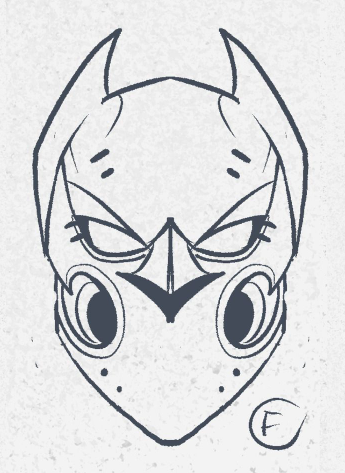 This one reminds me of an old time hockey goalie - like Jason Voorhees from Friday the 13th! The dots along the low profile jawline, the slash marks on the headpiece and I assume the corners of the eyes (unless those are eyelashes/whiskers as an omage to Batman’s ladyfriend Selina Kyle/Catwoman!

) give it a horror movie look. The ears are low profile but reinforced and I like the angle in look - rounds out the cowl in general and makes it look more rugged while still being more minimalistic. The nose piece is very cool looking and I love the openings on the side of the mouth to allow air in while still protecting the front of the face as much as possible. Looks like a the kind of cowl you’d wear into a riot! 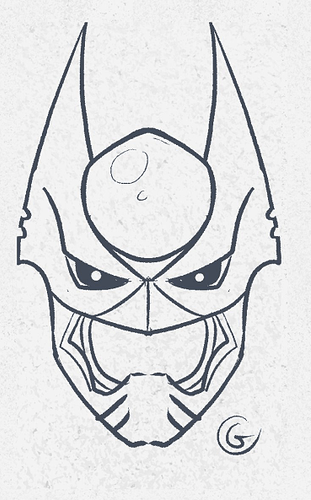 I personally like this one a lot but keep in mind I like Hawkman and this immediately reminds me of Hawkman. The ears are high and pronounced but also seem to be a weapon in their own right as they look sharp. Imagine headbutting someone in this or diving into a villain headfirst with those sharp spikes and the weight of Batman behind them! The ears also have ridges on the sides which are interesting options for cutting restraints, dragging along an opponents skin or just looking cool! I like that the eye signal and ears appear to be one piece and the reinforced jaw looks very cool - almost Kabuki or Native American in design. The forehead is very plain but otherwise this one looks cool to me. 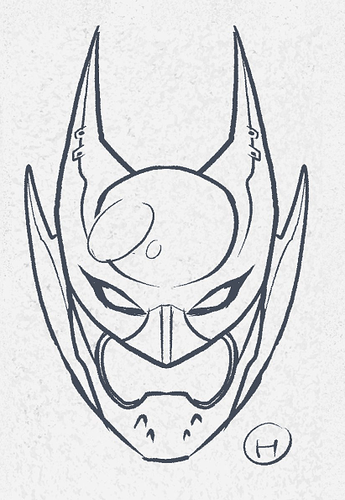 Our final option appears to be a return to the alien/Aquaman looks from earlier. The ears are one again looking sharp and seem to be an extension of the eye signal but with fins, for lack of a better term, along the side it really enhances the ears. The jaw is reinforced again and there’s an opening for the mouth. I like the nose shield on this one and the eyes are designed in a way to give them a more stealthy/intimidating look. I can’t quite tell what the design feature on the ears or chin is but there’s something there - thoughts? It looks alien to me for some reason but the fins give it an aquatic feel as well.

Overview - WOW! That’s a lot of choices! I’ve reached out to Pablo Collar to see if he is willing to provide any insight into the inspiration/thought process behind these and if he gets back to me I’ll update this with that information. It’s tough to get a read on these not seeing them in 3D or in color so based purely on the aesthetics we are presented with this is very subjective and we’ll all bring our biases and preferences into this. As is the case with all the votes there is no wrong answer - if you like it, vote for it! It’s your project just as much as it’s mine or anyone else’s and the fun is voting for the option you like best and seeing what we end up with as a community.

All that said, I personally like…well, you’ll have to hit me up on Discord for that answer!

What do you think? Which one do you like and which one will you be voting for?

EDIT/UPDATE: I mentioned I reached out to artist Pablo Collar for insight into the inspiration behind these cowls and he got back to me! Check out what had to say below: 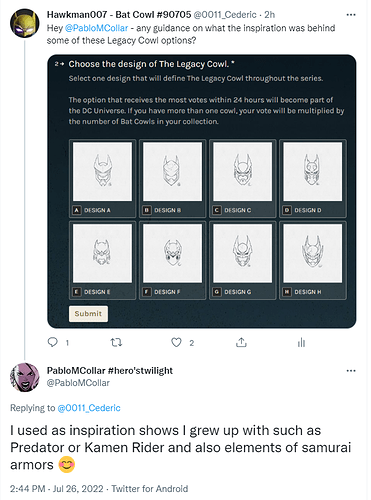