Kill the Justice League or Save Gotham?

With two different games stemming from the same DNA, which do you look forward to most?

The Knights vs The Squad 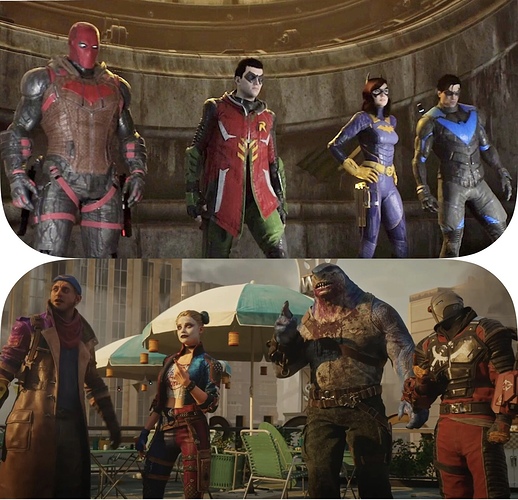 I agree that they could’ve been a little bit more inspired when it came to the big bad, but Rocksteady has earned enough good will from me to give them the benefit of the doubt. You only have to play one of their Arkham games to understand how much passion they have for the source material.

In reality both.
But knight due to being closer, Batman related, and not connected with the Arkham series so it has free reign to do what it wants.

But Squad too for continuing from the Arkham series and be something that is not Bat related for DC game.

The pros and cons my friend, they’re all too real. I’d have to agree with you. I just have a feeling Rocksteady will have an interesting story up their sleeve. But you’re right because as soon as I start think about Gotham Knights and the Court and cleaning up Gotham one territory at a time I start getting all giddy.

Gotham Knights wins major points for me because the bat-family, Jason Todd in particular, is what got me into DC. But Kill the Justice League seems like it’s going to be so much fun! Also bonus points for not being so dark (lighting wise…i like when im able to see clearly)

Anyways for the first 3 weeks after it was released, i watched the gotham knights at least once a day…

I know what you mean! That demo video of batgirl looks awesome and the environments are pretty gorgeous. And with Gotham Knights kind of playing with people’s expectations after the end of arkham knight but still being separated and it’s own thing could open the door for some pretty fun and surprising story beats.

The hardest part is going to chose who to play as! Not only based on which character I prefer but also their play styles…agonizing

While I love Harley Quinn to pieces… I love my batfam more, so I have to choose my fam first. And as the great @NYJt3 said, it’s release is closer in comparison to Suicide Squad.

This poll selection was kind of a no brainer for me.

Haha I was waiting too see if you saw this one. Knowing you’re the number one batgirl Stan, I was curious what you thought about her character design? For some reason the helmet and hair are off to me. Everything else looks gorgeous but those two things keep throwing me off!

I’m sure Bruce and the fambam would appreciate your loyalty

I really don’t want to chose my excitement is through the roof for both. SS edges out GK by a smidge only because it’s entirely new gameplay. I understand they reworked combat and characters but you could closely relate it to the style and feeling of the Arkham series while SS Is completely new gameplay and has captain boomerang.

You’re totally right! Although Rocksteady has let us play as Harley a couple different times, I do believe they’ll give her a set of mechanics and animations that will really outshine what they’ve done before with her. Otherwise yes, I’m totally excited and just as curious as to how they’ll migrate their perfect free flow combat system to characters like King Shark and Captain Boomerang.

They have come out and said it’s a lot of gun play in the game so maybe a 3rd person shooter with some fighting mixed in. I’m just guessing but it’ll tell like a totally new game and franchise I’m sure even though it’s in the same universe as the arkahm games

istg if gotham knights doesn’t do DLC with Tim, Cass, Steph and Duke I will riot. I’m looking forward to both thought because The Suicide Squad is quickly becoming one of my favorite teams.

Gotham Knights sounds great just because it’s a batfamily game, but Kill the Justice League looks like it’s trying to bring in a fresh take on DC gaming, so I’m really excited for that one!

Cass, Steph and Duke would be great DLC additions, but Tim’s already in the main game!