I was responding to a Twitter thread that the great artist Kelley Jones had posted about Deadman. I had responded that I was just looking through my Batman comics and liked the glow in the dark team up issues with Deadman. I mentioned how I like drawing with negative space and this was his reply!!! 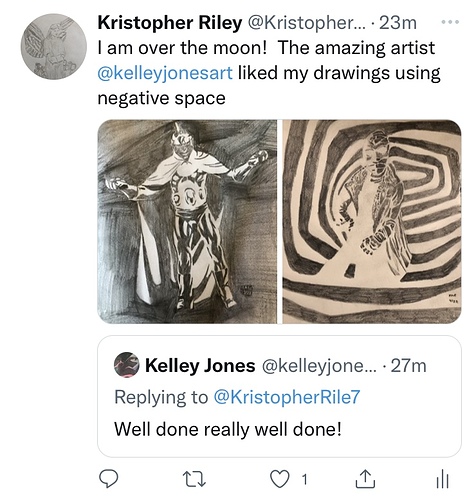 It’s always such a great feeling to be acknowledged by an artist you admire. What’s your favorite Kelley Jones work? I really love Sandman: Season of Mists, and Batman: Kings of Fear feels like the best suited Batman story to his art style that’s ever been told.

Jones’ work on Batman as a whole is quite impressive, and to be recognized by him is equally impressive.

Wow, that is really cool! I think if something like this happened to me, I’d print the Tweet out and frame it.

I have always enjoyed his covers for the Batman issues especially when I started with Knightfall. Right bit of mood and bigger than life characters.
I did really like that he enjoyed my work. It made me feel like when I tagged Jim Balent on a drawing I did as an homage to one of his Catwoman covers using the Batman who Laughs and he messaged me about it. I’m going to Terrificon this weekend armed with my celebrity sketches for them to sign so that will be cool too

Thanks! He seemed so nice in the conversation I was having online with him so I took a chance in sharing my drawings.

I haven’t done that but I have kept the picture of his response as well as when Jim Balent responded about a Catwoman cover homage I drew. I did frame my sketches of Christopher Lloyd and Lea Thompson that I showed them and had them sign.

I’ve saved the screenshots when DC Universe used to have Q and A’s and I shared sketches of the celebrities.

Thanks! He seemed so nice in the conversation I was having online with him so I took a chance in sharing my drawings.

Proof positive that taking a chance is always worth the effort.