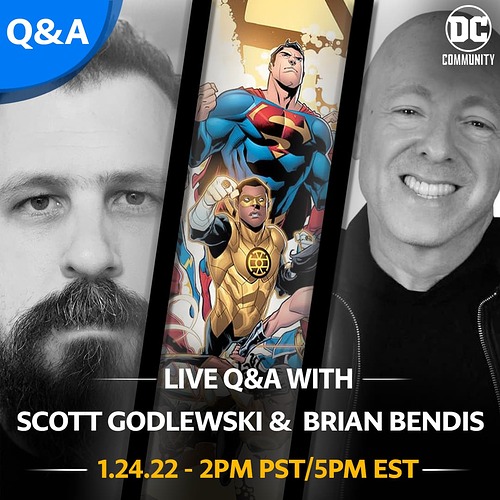 We’re holding our first Live Community Q&A of 2022 with artist Scott Godlewski and writer Brian Bendis! Want to know what it’s like to take on writing and illustrating such a monumental miniseries? Drop all of your burning questions in this thread and join us on January 24, at 2pm PST/5pm EST as Brian and Scot answer them!

Please limit your questions to just 1 per user, so everyone has a chance to get a response in the limited time we have. Thanks, and see you next week for 2022’s first Live Community Q&A!

As a long time Legion Fan I’m extremely excited to see them becoming involved in the DC Universe after so long an absence. You have created many new Legionaires for this version, although there really hasn’t been enough issues to explore them all. Which of the new Legionaires, is y’all’s favorite to draw and/ or write.
Long Live The Legion

Hello Brian,
I’m really a huge of your work on Ultimate Spider-Man, I really love the comic. Anyway since this is DC, How did you guys come up with a story arc like Justice League Vs. The Legion of Super-Heroes?
Thankyou!

Thanks for doing this Q and A. My question is, since you have worked for both Marvel and DC, are your approaches to story and art different with each company and if so, in which way?

When will Shrinking Violet say something? (as in with a word balloon in this series)

Do you prefer the Justice League or the Legion of Super-Heroes?

Who is your favorite member of the Justice League?

Who is your favorite member of the Legion of Super-Heroes?

My question is for either of you.

What do you think make the Legion who they are and same for the Justice League?

Hypothetically, if Justice League vs. The Legion of Super-Heroes were to be adapted into a movie or a TV show, would you like to write or produce it? Which filmmakers would you ask to adapt this miniseries? Who would you cast?

I’m not sure if I’m allowed to ask this…but Biscuits vs Funnel Cake…which do you prefer???

Thanks for keeping the Legion alive!

For both Brian and Scott:

Which era or eras of Legion stories have influenced you the most (and why), and which one had your favorite artwork?

Oh And a Great work and keep it up to the both of you by the way.

Hi, Brian! Welcome to the community! My question is about… The Question. When you came to DC in 2018, you made a big impression on us Question fans by bringing Q back after a long absence. Then you drafted him as part of the new Checkmate, and the Event Leviathan storyline. As a Question fan, this was pretty thrilling in concept. But in the story itself… it didn’t really seem like Vic got to do much of anything other than stand in group shots. Was there a greater intention for the character in your Leviathan story? Was something cut? Or was your intent to provide a platform for other writers to explore the concepts you were setting a foundation for? Thank you for your time, and I appreciate you stopping by.

My question for Scott is about Lanterns, Gold and otherwise. How do you keep hard light contructs visually interesting?

My question is for Brian, it is so great to hear you love so many DC Characters, and as a fan of some pretty obscure characters, I was wondering if there were any particular ideas for other characters you never got to do? Thank you so much, and welcome to the Community.

Hello Bendis! When you were at Marvel did you script in the “Marvel style” and has your method of scripting changed at all since moving to DC? Excited for that HBO Max animated LoSH show!

Hey Godwelski! When drawing a big team book like the Legion and the League, how many members do you typically aim to include per panel and how do you handle the cast size?

Hello Mr. Bendis. I’m a fan of some of your work, most notably Batman: Universe. I’m curious to how the idea of aging up Jon Kent originated. Thank you for your time.

Your Superman run is one of my favorites. Was just epic all around. I have a lingering question that you didn’t get a chance to answer last time you were here though: what’s the deal with Rogol Zaar and his motivation to destroy Krypton? In Superman #14 we learn that maybe he is of Krypton himself (his sensitivity to kryptonite). Elsewhere we learn that Krypton somehow destroyed his people. Do you have a backstory in mind for Rogol Zaar, and if you do, do you have plans to tell it?

When this iteration of the Legion was first introduced, it was with the full, 20+ strong version already in place. Was there a reason why it didn’t start with their beginnings, and how were you able to juggle all these characters together to try to give each character their moments to shine?

There was no listing for Justice League v. Legion of Super-Heroes #4 in the latest solicitations. What happened to cause the delay and when can we expect to see the issue solicited?