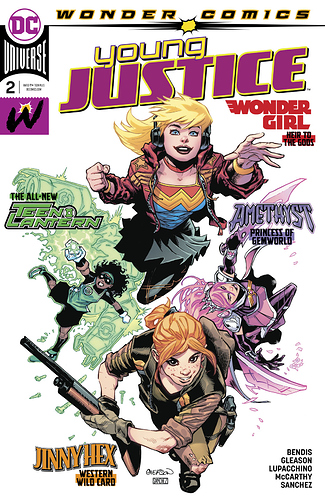 Welcome to a new round of action and adventure!

This week sadly sees the release of the final issue of the current volume of Young Justice. But, all is not lost! While the series may be over, let us return to when the Wonder Comics imprint was new as was it’s flagship title, Young Justice.

That’s the score, team! Read, discuss and, above all, have fun and stay young!

It’s Tuesday, so that means new comics on DC Universe and brand new DC comics at your favorite comics outlet.

Tales of the Dark Multiverse: The Death of Superman 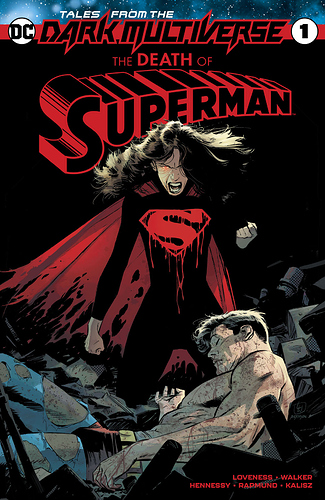 The Dark Multiverse takes on the highest-selling comic book event of all time-the Death of Superman! In a broken world much like our own, Lois Lane, twisted by rage and grief, becomes the Eradicator and takes revenge on those who let Superman die, and the corrupt world he could never defeat. Now, with the power of a god, she’s going to end the battle by any means necessary…and the Reign of the Supermen will be over before it begins! 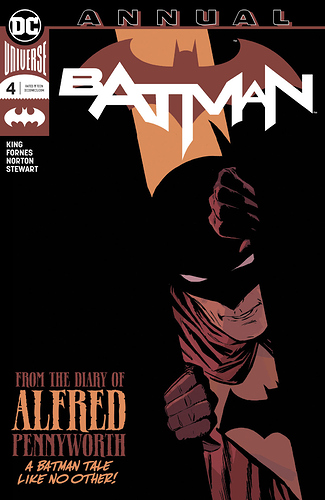 In this new annual, it’s two unique stories by BATMAN mastermind Tom King! First, King reteams with Lee Weeks, his collaborator on the Eisner-nominated BATMAN/ELMER FUDD #1 to send the Caped Crusader into space in search of the rare element he needs to save a life on Earth. But what terrible gauntlet of tyrants and monsters will he have to go through to reach his objective? Then, it’s back down to Earth and the grimy streets of Gotham City as King and acclaimed newcomer Jorge Fornés task the Dark Knight Detective with a dangerous case only he can solve. 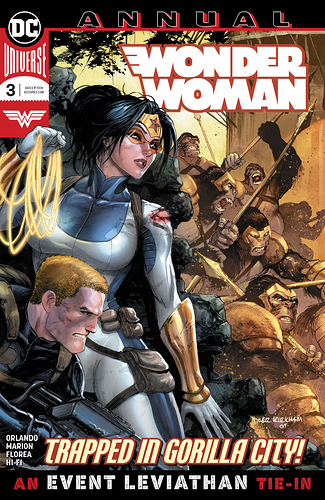 An EVENT LEVIATHAN tie-in issue! Years ago, Wonder Woman saved young Maria Paul from an explosive standoff between A.R.G.U.S. and the insurgent Sons of Liberty. By pulling that child from an inferno of hate, Wonder Woman changed her life. Diana watched Maria grow up into one of A.R.G.U.S.’s top agents. Every step of the way, Wonder Woman mentored Maria, taking her on her first mission - a daring rescue in Gorilla City. But when Leviathan decimates A.R.G.U.S., Diana’s absence causes Maria to question everything, pushing her toward Leviathan itself. And when she does…the truth about her fiery rescue by Wonder Woman might just kill her. 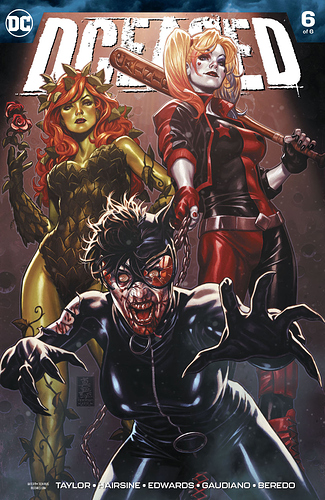 Humanity is on the brink of extinction, and only a few remaining members of the Justice League stand between life and annihilation. As the remnants of humanity make their last gamble for survival, will there even be a planet left to call home when all is said and done? The senses-shattering conclusion to the year’s surprise blockbuster is here!

Brand new comics for the week of 11/3 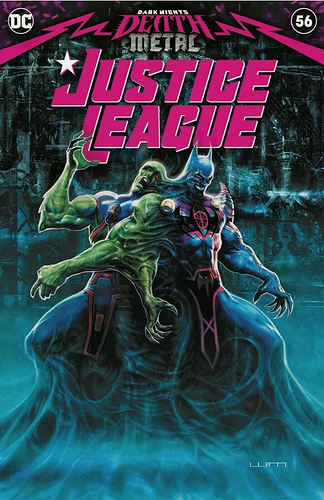 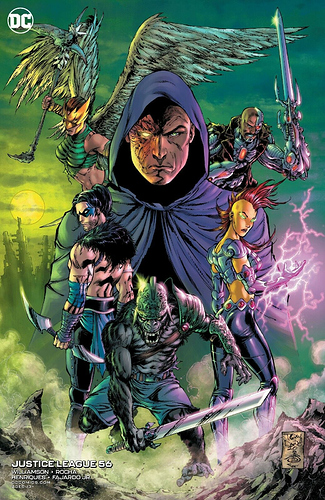 “Doom Metal” part four of five! In this Dark Nights: Death Metal tie-in issue, the Justice League has nowhere left to hide from the agents of Perpetua. The towering, nightmarish Omega Knight hunts them to the edges of Brimstone Bay and will stop at nothing until the team is obliterated! And all the while, above Perpetua’s throne, Hawkgirl battles the Mindhunter for the soul of the man she loves: Martian Manhunter! 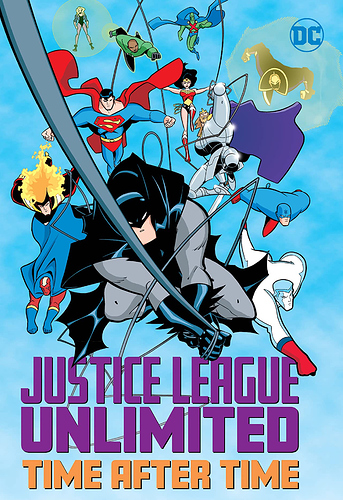 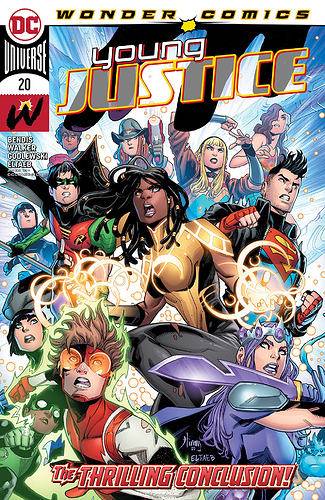 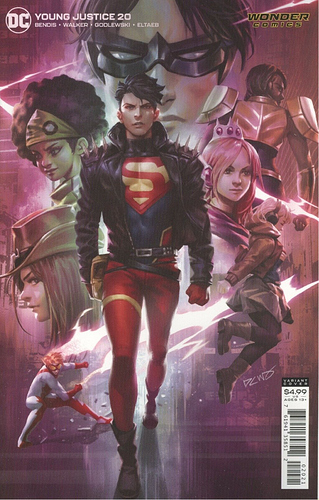 For the first time in months, the entire Young Justice team comes together to face a threat bigger than anything they’ve faced before. Just as the team has come to grips with their fractured legacy, someone from Young Justice’s past has come back to murder them! Guest-starring the Wonder Twins, Dial H for Hero, and Naomi-plus some other Wonder Comics surprises too hot to mention here! Don’t miss this final issue from the Eisner Award-nominated co-writers of Naomi!

image2048×600 471 KB
Finally, be sure to check out the Justice Sale via your favorite digital DC outlet. If you want a good read at a good price, this sale’s for you!

Ticket for one please, I’ve been meaning to read these issues in full!

Happy to have you, good sir! I look forward to your thoughts.

can’t speak to this since I have not watched the Young Justice show yet.

Ooh, I seriously recommend it, it is flipping fantastic.

I’m not super sure I understand the difference, lol.

Well, as I’ve seen it, the main difference to me, at least comic wise (especially because cartoon YJ is pretty much a mix of comics YJ, Titans, and now outsiders), is that Young justice is more comedy based and Titans are more drama based.

we all owe Bendis a big “thank you”

Also, just wanted to say, I think some of his work over in the supe’s department kind of evens it out so that this isn’t necessary

So many replies! cracks knuckles over keyboard

@scoop001 Hi! Amethyst is alot of fun. She’s also starring in her own self-titled mini under the Wonder Comics imprint. I’ve only read one issue of it (as it came in one of the Walmart bundles), but so far, so good.

Speaking of recent(-ish) Amethyst reads, have you read her New 52 book, Sword of Sorcery?

@Don-El I would love to see Gemworld in future episodes of Young Justice. Along with a certain Warlord…

Dial H for Hero is a solid read. Probably my third favorite title in Wonder Comics after Young Justice and Naomi.

Regarding the difference between YJ and Titans, I see one (YJ) being the future Justice League while the other (Titans) is characters that may be in the League but also might not, and just go about doing their own hero bit.

@SuperBlueGrodd Young Justice is indeed a fantastic show. One of my non-DCAU favorites.

Thanks for chiming in, kids!

Regarding the difference between YJ and Titans, I see one (YJ) being the future Justice League while the other (Titans) is characters that may be in the League but also might not, and just go about doing their own hero bit.

Another good point. I always dislike future stories that put the Titans as the future JL. The whole point is that they aren’t the Justice league lol. Titans forever

The Titans don’t need to be the Justice League. They have defeated villains that are strong enough to take on the League.

No spoilers, but have you read the Titans of Tomorrow arc of Johns’ run on Teen Titans?

Yep… that’s pretty much what I’m referring to. (John’s run is my favorite, remember?

Totally agreed. The Titans are about proving themselves as their own heroes, not to take over the identities of their mentors.

I figured, but I wasn’t sure if you’d got to that arc yet.

Oh yeah. I read it quite a bit ago, it’s pretty early on, and I don’t know if I’d be able to formulate that great of an opinion on so little… and er, ok, maybe I still haven’t gotten past infinite crisis, but I’ve been distracted for the past year lol…

At one point, Titans of Tomorrow was my favorite arc of Johns’ Titans.

Now though, IDK what my favorite would be. I might just have to re-read his run again. Well, if I have to, I have to.

Oh, I did enjoy the Naomi Wonder Comics miniseries as well. The whole subplot of two warring alien soldiers stranded on Earth becoming buddies was absolutely fun and inspiring in this day of American Civil War II.

I’m also looking forward to at least sampling the Amethyst Wonder Comics series that will be appearing here in the next few months. The art definitely carries on the old 1980s intricate and pastel colors theme. I’m not sure about the writing, we’ll see.

Even though Wonder Comics has ended, I’m hopeful that Naomi and Amethyst stick around and maintain their relevancy.

Maybe in a post-Future State Titans series? I’d prefer to see them in their own titles, but I can also see them being added into a team book. A new volume of Young Justice that picks up where this one left off would suffice too.