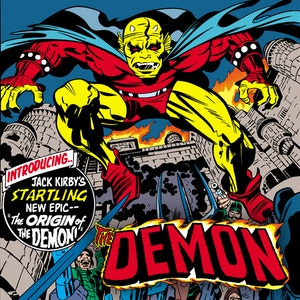 As we inch ever-closer to the grand, sugar-coated, Day of Days that is Halloween, we’ll be taking a look at one of the signature DC creations from Jack “The King” Kirby (aka The Comic Book God), one that showed that not all demons are evil: The Demon, aka Etrigan!

To celebrate Jason Blood’s heroically demonic alter-ego during the season where demons and the like are all the rage, this week will be another grab bag of treats (no tricks in the JLBC

) that you, dear reader, can pick and choose from.

So, belt out your best “Gone, gone, the form of man! Rise The Demon, Etrigan!” as you check out what’s in store this week:

Those are the heroically demonic happenings in our grab bag of treats this week, League! Read just one, or read them all, all I ask is that you read what you like and have a devilishly good time in doing so!

I’ll be back after work for this thread

I’d give him a cat treat, but IDK if Temptations are his jam, or not.

I’ll be back after work for this thread

Sweet! I thought of tagging you when I posted this one, but it slipped my mind, sorry to say.

Nevertheless, I’m glad you found the thread and I look forward to your thoughts.

Are you to new The Demon, or is Jason Blood’s alter-ago familiar to thou?

Very familiar, Etrigans been my favorite character since high school, first introduced to them from the JL animated ark a Knight of Shadows (still a few of my favorite epsiodes) and then as I found DCUI I’ve come to love some of the series hes in.

What’s your favorite take on Etrigan?

It has to be Hell is Earth followed by the JL Dark movies. In the movies I loved his relationship with Blood and the bickering with Constantine

. In Hell is Earth I liked that their roles were reversed and we get to see a little of Etrigans upbringing/rise among the ranks. Plus the art is really great, there are some fanatsic snarky faces that E makes plus some more serious ones like my icon pic. But also the Secret Six version because of the outfits they put em in kill me. 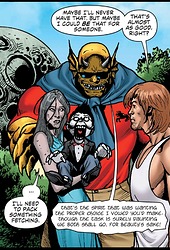 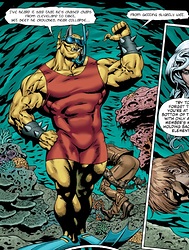 Also and im sure this is probably blasphemy but I never finished the Kirby series, its too loud. I should one day go back and try again as it is Etrigans origin story…

Very familiar, Etrigans been my favorite character since high school

Cool! I was first introduced to Etrigan when I was in high school too, via The Demon Within episode of The New Batman Adventures.

SN: I recently discovered that the voice of Klarion in that episode, Stephen Wolfe Smith, died shortly after he played the character. That’s a bummer.

It has to be Hell is Earth followed by the JL Dark movies.

Hell is Earth was fun, as were the JLD movies. Especially Apokolips War, when Etrigan just gives up and becomes an alcoholic that doesn’t bother to rhyme anymore. He may not be a rhymin’ demon, but he still kicked ass, all the same.

Have you read Blood of The Demon? It’s not yet available in digital, but its one of my favorite Etrigan-starring titles, and then some.

But also the Secret Six version because of the outfits they put em in kill me. 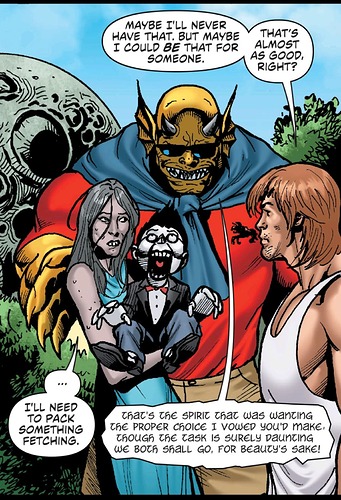 Who knew Etrigan looked so snazzy in a Polo shirt and khakis?

You’re welcome. I thought it was fun, and hope you do too. Chime in once you read it, if you like.

Also and im sure this is probably blasphemy but I never finished the Kirby series, its too loud.

No, 'tis not blasphemy.

Sometimes, Kirby’s stuff can be a bit much, be it in writing or art. I’ve found that if you give it another whirl, it can be easier to digest than the first go-around.

Also @stefanie.m, have you seen this? 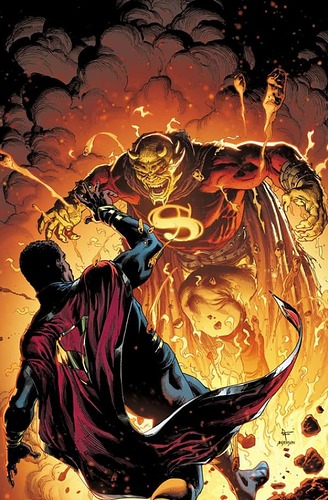 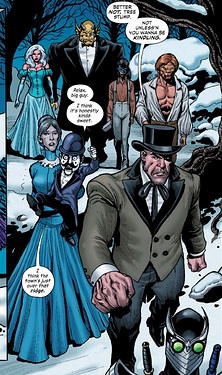 Have you read Blood of The Demon? I

No but after googling the premise I NEED to. I am having a wicked hard time tracking it down though I wish they’d throw it up on DCUI, I even asked my local comic shop guys and it was a bust.

when Etrigan just gives up and becomes an alcoholic

Yes it was so endearing and sad.

The Demon Within episode of The New Batman Adventures.

Great episode as well. Thanks to @capo-mage I ordered the figures from that episode after seeing theirs

Chime in once you read it, if you like.

It wasn’t bad, it did feel a bit rushed and i wasn’t surprised when a certain sorceress showed up lol… Also who even knew this was possible 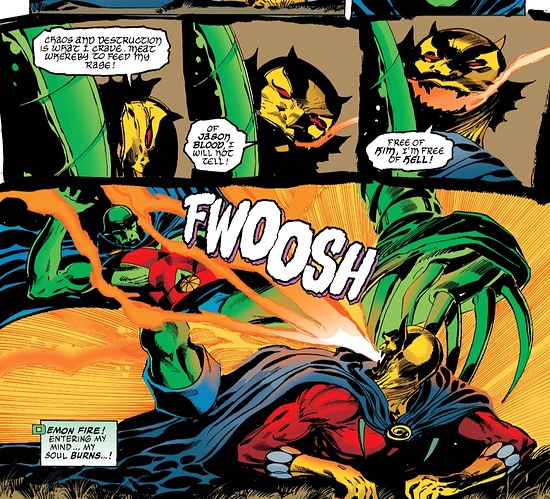 Oh and there was the bit where J’onn reverses whose in control. I’d never seen that before I mean Constatine has controlled Blood to bring Etrigan out in the movie but I haven’t seen that rhyme or thing done before? 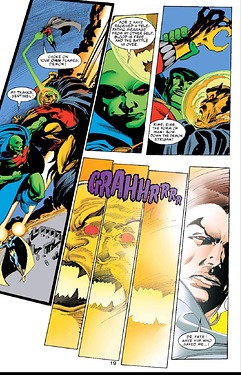 Its the main cover to Justice League Incarnate #2,

Ooo i have not Etrigan looks bad @%/, not sure how i feel about the giant S on his chest though…

I got tagged here according to my notifications but I can’t see it anywhere? Not even one where I’m connected to a post?

It’s probably because of a tag you have set to receive notifications by.

While you’re here though, you’re welcome to talk about The Demon.

it is quite long

Great episode as well. Thanks to @capo-mage I ordered the figures from that episode after seeing theirs 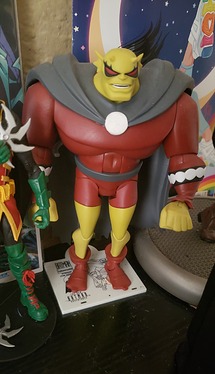 Oh gotcha. I did check the top but I missed it. Ty for tagging me. I’m so happy you got that figure. It’s one of my favorites. The fact u get Klarion & Teekl included is an embarrassment of riches!!! BTAS figures are all done right. Tons of accessories & the personalized stands are awesome

. I wish all figures came with those stands?.?.?

I see the McFarlane Damian Robin poking out there. Also a rad choice.

Have you the McFarlane Etrigan yet?

Ooo i have not Etrigan looks bad @%/, not sure how i feel about the giant S on his chest though…

Its an alternate Earth Etrigan, if I recall. I believe he goes by Super Demon.

Indeed you do, I needed some Damian love in my collection and I liked the look of that figure.

Have you the McFarlane Etrigan yet

And I sure do.

Well definity not my favortite piece, it is still cool it was made and based on Demon Knights…now I just need a matching Blood figure.

I may have to check it out.

The fact u get Klarion & Teekl included is an embarrassment of riches!!! BTAS figures are all done right.

Facts they are amazing pieces!

Very true. I need to get the McFarlane Damian. This ones great tho cuz I’m building King Shark & has the old school hammerhead variant. Plus a Court of Owls mask. Very reasonably priced. 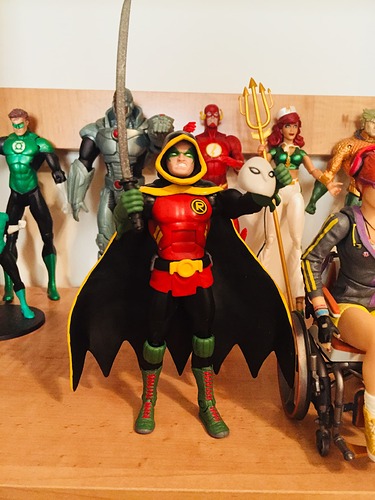 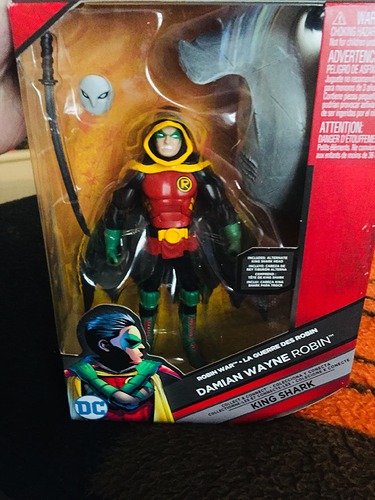 And I sure do.

As Mr. Burns would say, “Excellent!”

IDK if it was purposely timed, or just a coincidence, but getting a figure of Etrigan in his Demon Knights garb in time for the series’ 10th anniversary was most swell.

Right? Nobody has made a Jason Blood figure yet, but when they do, I’ll be standing in line for it.

Speaking of Etrigan in plastic, do you have this badboy? It’s one of my absolute favorite Etrigan figures: 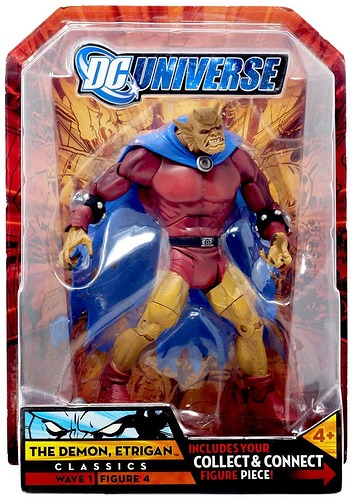 House of Horror brings the JLBC a treat with a Halloween Profile for The Demon!

I do not besides the 2 above I have this one

And this lil cutie at my work desk 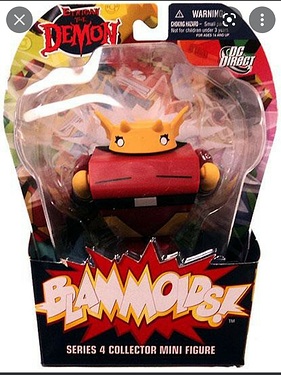 Thanks, @darkstarz! That profile for The Demon is quite schway.

tried to rhyme his reply, Etrigan-style, but got distracted and just kept things normal