If you take a drink every time you see Pandora in the background of a Wave 1 New 52 #1, you’ll be talking to The Phantom Stranger before you know it.

When you read the first issue of our next adventure, keep an eye out for Pandora in the background. She’s there.

When you read the first issue of our next adventure, keep an eye out for Pandora in the background. She’s there.

Point her out after the post goes up (Wednesday), and I’ll toss some Cool Points your way.

SN: I don’t think I said so elsewhere, so Happy DCUIversary, @ajm08g!

As a Craig Ferguson fan, I am hurt that Geoff Johns got this wrong. 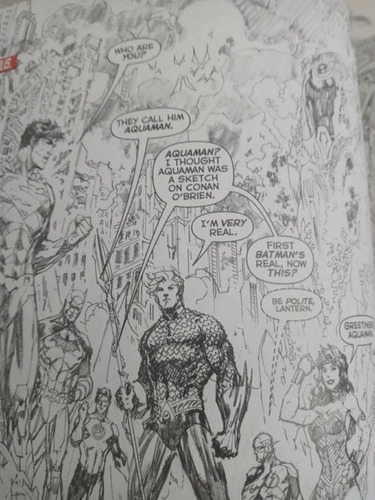 Here is Craig Ferguson in one of the many Ask Aquaman skits. 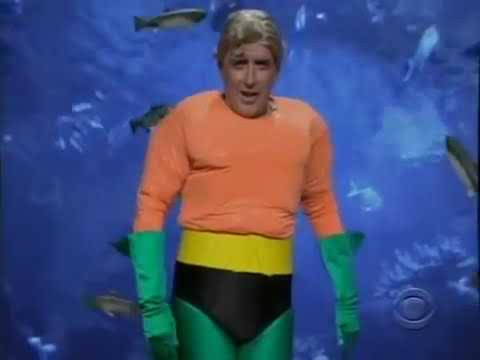 After reading Justice League Unwrapped by Jim Lee I have decided this will be my last Unwrapped book. It is cool to see the notes for the inker and colorist but I feel like I missed out a lot of the story. A lot of faces were missing throughout the book or some scenes just written in for the inker to do.

I did enjoy the story. I remember reading this as it came out and really liking it. The first story is excellent. I am usually not a fan of origin stories but it worked in the New 52. It made sense as it was introducing the characters to each other, as well as the reader. There was a great amount of world building as this was 5 years into the future from most of the titles.

The second story arc I didn’t like as much but it wasn’t bad. I did enjoy the Wonder Woman storyline throughout. The bad guy was sort of the weak point for me. The cause for him to turn into a villain was there but everything seemed rushed. It is probably just me as I tend to get nitpicky.

Alright, finally an excuse to finish up that snazzy deluxe edition of this run I got a while back.

Yeah – I was reading some of these as they came out, including these stories.

Back when it was first announced I was at first really surprised…and then really not surprised. While there were stuff I was reading and enjoying at the time, I think it’s fair to say that the line was in need of a refresh. Sure, the Batman and Green Lantern lines were doing fine because of Grant Morrison and Geoff Johns’ handling of that line, but we couldn’t really say the same about much of the others.

My thoughts now? The New 52 I think had some absolute, stand-out hits, some colossal failures, and the rest was somewhere in the middle – much like pretty much every period in not just DC history, but comic book history in general.

Probably Origin. I kind of feel bad because no one talks about The Villain’s Journey, but Origin is definitely more memorable, with stronger action and plot. I think The Villain’s Journey has some good things to it, like the focus on character pieces for the League and how they’ve grown since the team first formed, as well as seeing some of the political and societal consequences of such a team forming.

The problem with The Villain’s Journey is, I think, ironically the villain. I mean, there’s a reason why Graves I’m pretty sure never shows up again. He’s kind of flat and uninteresting. There was potential there, with the mythology his powers are based from, but he just didn’t land with me.

I think the black pants worked in The Odyssey, when it was an alternate universe/urban fantasy rework of the Wonder Woman mythos. But, if we’re talking about Diana as her classic origin, I just don’t see black leather pants fitting her character and history.

That said, it’s kind of moot since the real answer to which is better is “Neither, skirt is superior.”

Ultimately, while I feel like there are arcs of various Justice League titles I like more, the Johns/Lee arcs are definitely up there, though I think of more the overall volume with the other artists like Ivan Reis and Jason Fabok.

Alright, finally an excuse to finish up that snazzy deluxe edition of this run I got a while back.

Ah, Justice League Origin: The Deluxe Edition? I’ve that too, and it’s a swell tome.

My thoughts now? The New 52 I think had some absolute, stand-out hits, some colossal failures, and the rest was somewhere in the middle

I’m of a similar mindset.

I don’t think there were any “colossal failures” during the whole of The New 52 however, just books that were good, but somehow missed finding an audience (think Men of War for a Wave 1 title, and then, say, The Green Team: Teen Trillionaires for a later series) as they fell between the cracks while books like Justice League, OMAC and the second New 52 volume of Deathstroke were rocking and rolling.

no one talks about The Villain’s Journey

You know…I could see The Villain’s Journey being a good base for a sequel to Snyder’s Justice League if such a thing were to occur.

Find a suitable place to fit in David Graves, then the rest practically writes itself.

They could also mention Green Arrow, as a tip of the bow to Justice League #8.

Diana (to Bruce, as they’re analyzing data on potential new members): “What about Oliver Queen, aka Green Arrow?”

But, if we’re talking about Diana as her classic origin, I just don’t see black leather pants fitting her character and history.

They don’t necessarily fit her history.

With The Odyssey, JMS said he wanted to drastically change Diana and add new things to her that, potentially at least, could then become part of her history.

I’d still like to see the black pants (be they Odyssey or New 52-style) at some point in a movie. Maybe Diana’s existing suit is destroyed, and she fashions the promotional New 52 uniform in its place? It could work.

I’m sure Gal Gadot wouldn’t mind a change in clothes, since she’s worn the same suit in 4 movies now.

Ultimately, while I feel like there are arcs of various Justice League titles I like more, the Johns/Lee arcs are definitely up there, though I think of more the overall volume with the other artists like Ivan Reis and Jason Fabok.

Okay, I have to come clean:

While Jim Lee is and always will be my #1 all-time favorite comic artist, I did actually like Johns and Fabok’s output more, as The Darkseid War is my absolute favorite arc of the entire series (I kind of want to pull out the Essential Edition of TDW now…).

Thanks for chiming in, @Jay_Kay! Its always good to hear from you.