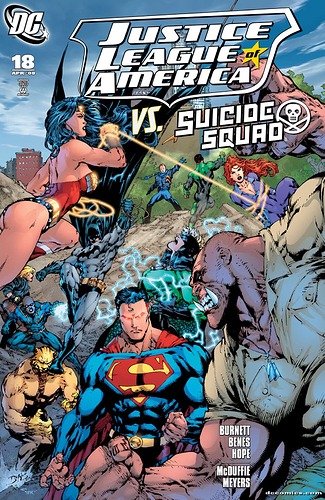 This week, I’m serving a buffet that is full of delicious treats, be they titles starring the Justice League, or books starring characters that have been in a Justice League at some point. The thread linking all of them? They all feature characters seen in The Suicide Squad.

You don’t have to read all of the books in this literary buffet. Pick one or two that star a character from the movie that you may not know much, if anything, about and go from there. Then choose a few more. This is one buffet that you can come back to again and again wherein you will always find something new to sink your teeth into.

That’s your mission, League! Again, you can read any of the books above that you want. Don’t rack your brain thinking you have to read all of them, because you don’t. This is just a medley of schtuff featuring some of our latest big screen superstars that you can pick and choose from at your leisure.

Have fun League, and enjoy The Suicide Squad, both on-screen and (of course) on the page!

Didn’t anyone hear about a certain movie that opened a week ago, and these reads which fit it to the letter (and then some)?

I have the main books in my rotation in the very near future. I have been sidetracked with dwindling down the books on my physical shelf. Eek, those stacks of floppies are still scaring me!

Don’t let those singles scare you, mon frere. You lead House of Horrors, so you should scare them!

I might have stacks dating back about 2-3 months. They are not small piles of comics. I did get some triangle era in tonight. Fun fact, Action Comics 661 is on DCUI but is not on the Triangle Era vol. 1 list. (AC 661 is Triangle 3)

I know the feeling.

I remember having stacks date back half a year in the mid-'00s, when I read nearly everything DC and Marvel in singles, along with manga and non-DC/Marvel titles.

Good thing my social life was nearly non-existant then, so as to have time to eventually get caught up with some of those books, at least.

That’s nice to hear that you got some Triangle Era in! You know, the FDA says that at least one or two Triangle Era books a day will keep the “I haven’t read any good comics lately.” blues away, and I fully believe them.

I do have a couple reading projects, club reading which mainly HoH, Modern Supes, JLBC, and BoP with hopes of fitting in JSA club and maybe Batman club. Then I have the goal of reading books I have purchased in single issue or collected formats. I did organize all of my single issues last night so they are in an easy to read stack. Then there is the Identity Crisis to 52 reading list that I have been making along with Triangle Era.

While I can read comics on the clock in between calls, I can’t really read DC books because of things so I am slowly getting through my Comixology and bundle backlogs during the day. I am almost done with InSEXts and the first arc was really good but the second arc…not so much.

read comics on the clock in between calls

If only smart phones existed back when I worked in a call center in the mid to late '00s.

Incoming caller: “O-okay. I’ll just finish some stuff while you read, then.”

Why settle for a phone when I can use my tablet. I do, however, promptly put my tablet up once I hear the first beep for a call.

I wouldn’t take my tablet to work, but if it was on a work-provided tablet, then…

…yeah, still wouldn’t do it. Too many potential peeping eyes, where with a phone, you can guard it from unwanted attention.

This said by a guy who decked out his cubicle with DC and Marvel stuff from one end to the other.

Working from home does have its benefits, along with not sitting in a Petri dish and wearing sweat pants and shorts every day. I have not worn jeans since I have started this job.

Working from home does have its benefits, along with not sitting in a Petri dish and wearing sweat pants and shorts every day. I have not worn jeans since I have started this job.

It is nice to wear shorts to work (I’m rockin’ my tan cargos, ATM).

The last time I wore pants to work in a non-meeting capacity was…months and months ago. When I get a new gig, I’ll have to re-acclimate myself to the worlds of jeans, gabardine dress pants and/or slacks, once more!

What about footwear? I’m barefoot during my work day. Not gonna lie, it’s pretty rad to stretch the 'ol tooties whenever the need arises.

Oh, yeah. As Groundskeeper Willie once said, “That’s the schtuff!”

What is footwear, again? The most is my trusty Teva sandals. It is a shame because I just got a set of Justice League socks that I have barely worn. Winter will be here and I guess that is when I will be rocking those. It is sounding more and more that my permanent “office” is about 3 feet away from my comic collection. The only upside to COVID? I think so.

You know, I bought some Superman socks, once.

“One size fits all.” my ass. They were too snug for my brawny feet and lower legs. I guess nobody at that apparel company knows what its like to have six-inch wide calves.

Onto the discussion of these reading choices.

I liked them both because each had a lot of fun moments to pick and choose from while reading through each of them.

Who from The Suicide Squad movie would you place in the ranks of the Justice League (be it a comic-based League, or the DCEU iteration)? Surely there’s one person on Amanda Waller’s team that could be amongst the proverbial angels of the League…right? Anyone? Bueller?

I would have picked Rick Flag to be among the Justice League.

Sees Batman give a trademark scowl…

Well, going toe to toe with Batman sure gives credit to being apart of the League that’s for sure.

Unfortunately Peacemaker ended that… Still hurts thinking about that…

Which of this week’s picks do you feel best captured the tone, characters and aesthetics of The Suicide Squad?

The Suicide Squad to me had it’s funny moments, shocking moments, and was not
afraid to get a little brutal. That funny scene of Bloodsport and Peacemaker trying to one up each other as they were taking out all the rebels which they found out later comes to mind was just some of the brutality I think about.

I’d say a little from each of the comics best captured the tone, characters and aesthetics of The Suicide Squad.

Finally, which books did you select, and what was it about them that caught your discerning attention?

I selected them all because once I start reading… I won’t stop until I finish reading.

As here are those moments that I felt captured the tone, characters and aesthetics of The Suicide Squad.

Don’t worry Vroom I got you.

Plus, now to take a look and see what Waller is up to in Belle Reve.

So, Waller doesn’t see my actual reaction to that, and it was not me who did it, but I know who it was that did.

Well onto other missions then!

Er-ma-gash @ajm08g! Your panel selections are legion (and feature super heroes to boot!

Don’t worry Vroom I got you.

ajm08g then notices a shadowy figure walking down the hall…

Great Krypton! Time to go back into action.

You there! Out of the shadows!

A puzzled look of Captain Boomerang is revealed! 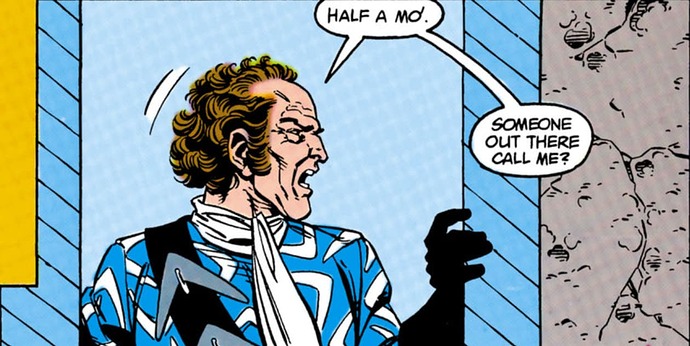 Sure did Boomerang… Now… Enjoy this!

With a mighty whirl and throw from ajm08g the following occurs.

Thank you for your time Boomerang.

Now off to go and get another pie. Any flavor of choice Vroom?

Boomerang is then seen mumbling inaudibly walking away.

Now off to go and get another pie. Any flavor of choice Vroom?

Great Rao, I love cherry pie, so go with that.

Oh, and uh, save me an extra will you? Chuck one at Digger all you want, just keep mine in the fridge, m’kay? TY.

I love cherry pie, so go with that.

Oh, and uh, save me an extra will you?

Extra placed in the fridge.

Chuck one at Digger all you want

Also amuses Waller, and that keeps her distracted as well from pushing the exploding button which is good.

Tossing a pie at a deserving jackass is always fun, and Digger is a deserving, boomerang-tossin’, jackass!

doesn’t usually speak with a full mouth, but when the pie is this good, it can’t be helped