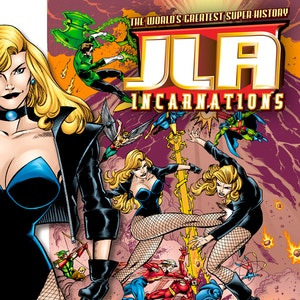 Hello League, and welcome to another week of action-packed adventure starring the World’s Greatest Super Heroes™!

Last week, frontiers was our theme while this week incarnations is the theme du jour. This is mighty apropos being that:

Here’s the details on what you can look forward to this week:

That’s the mission, League! No matter your favorite incarnation of Earth’s Greatest Heroes™, I hope you enjoy this week’s reading!

Note: Beginning next week, Justice League Book Club entries will debut on Monday instead of Tuesday. Mark your calendars!

This was my first time reading this series. I was familiar with all of the incarnations of the JLA shown, however. My favorite would probably be the satellite era with Zatanna on the team. I remember reading those stories back in the 80s at the height of my comics collecting.

Nifty! The Satellite Era is a favorite of mine, while I have a soft spot for the Detroit Era League.

My very favorite is likely any team from Grant Morrison’s JLA. Whether it’s the Magnificent Seven themselves, or the latter team that featured Steel, Big Barda and so on, I love Morrison’s JLA so much that any team is automatically a favorite, or a contender for favorite at minimum.

Ostrander is a good writer but only 4 of the original 7 members are in issue 1.

Black Canary replaces Wonder Woman, like in the Year 1 series. At some point, she is the daughter of the original Black Canary, but in early tales of the JLA, she IS the original

Probably Canary is there because Diana is portrayed as just starting out Post Crisis.

We don’t see Diana until the JLI issue in this series, which occurs Post Crisis.

Hawkman and Hawkgirl from the JSA join before we see Ralph, Zatanna and Firestorm as members in the Satalite

The JLI occurs after Detroit and is disbanded by Wonder Woman? Why does she show up then?

Then Batman and Superman have a talk to create a new JL.

To fans, it was back to the glory days of the original 7.

Only Aquaman and Martian Manhunter are from the original 7.

Barry and Hal are not available. Barry is dead
I don’t know if Hal is evil or the Spectre at this point. So Wally and Kyle replace them. Kyle is probably very inexperienced at this point and Wally has only worked with the Teen Titans. Why them?

Superman and Batman seem to have had little to do with the team according to this series. It is also true in the early issues of JLA and in many other eras.

Diana seems to have little to do with the JLA in this series.

We know Morrison created this version and why but in terms of this series why were those super heroes selected?

It is confusing to me and it makes a ton of the early issues non canon.

Superman and Batman seem to have had little to do with the team according to this series. It is also true in the early issues of JLA and in many other eras.

Diana seems to have little to do with the JLA in this series.

This specifically is why, as someone still fresh into the comics archive, I found this to be an interesting read.

My introduction to the Justice League was the animated television series, therefore, I was always under the impression that the Trinity (Superman, Wonder Woman and Batman) came together to form the League.

After reading this, not only is that not true, but it also makes complete sense that they would initially have very little to do with the League from the start (From the Bronze age Onward).

This specifically is why, as someone still fresh into the comics archive, I found this to be an interesting read.

I’m glad you found this week’s read to be interesting, and I hope you’re enjoying your stay in the comics archive. There’re a TON of wonderful reads to be found within its hallowed digital halls.

Simple answer: Don’t worry about it too much, and just enjoy the ride.

Thanks. I understand the concept of the Multiverse. It’s just that I have friends who want me to educate them about DC. I have to try to find ways to explain why things are not as they seem without sounding pretentious. It can be hard

Re Learning about DC

In that hour and a half you will get a good overview of most of our comic book library. It was filmed in.2009 so of course can’t talk about newer than that

This is my complete list for New DC Readers. It is intended to introduce most of the major characters of the universe at a basic level. It is by year.

New to Comics And The DC Universe - Any Recommendations? Comic Books

You probably have a few characters you like So pick and choose.from this list This is my complete list for New DC Readers. Together it gives you a familiarity with most characters in the DC Universe on a basic level. It is by Year and Title and decribes each arc. Two lists Older single Issue Classic titles including O’Neil and Adams Then Silver Age and Later List Julie Schwartz said to Denny O Neil once, “Every Comic Book is the first issue for some reader.” Back in.the 1960s, a comic…

It’s just that I have friends who want me to educate them about DC.

Now those are friends! Invite 'em over for one of our annual keggers/shindigs/hootanannies (“reading parties”) sometime.

Phew, just finished the mission in time before the next.

Talk about many different Leagues!

Have you read JLA: Incarnations?

Ah, this was a first time read for myself as well.

Of the teams spotlighted in this series, which was your favorite?

Hmmm… There were a lot of interesting things to be said about each team incarnation for sure.

I did kind of wonder where was Wonder Woman through the early issues as well since I had been accustomed to her being apart of the League for so long.

I’d probably say the first iteration of the League in issue 1, and then the last one in 7 are towards the top of my list, but found the others through issues 2-6 to have good moments as well… Except for the Extreme League… They were… A tad… Too extreme…

Also in issue 6 it was really interesting seeing that version of Guy as the last time I read about Guy he was… Well… The Guy reading through the Death and Return of Superman Guy.

I did kind of wonder where was Wonder Woman through the early issues as well since I had been accustomed to her being apart of the League for so long.

That also really threw me off.

Also in issue 6 it was really interesting seeing that version of Guy as the last time I read about Guy he was… Well… The Guy reading through the Death and Return of Superman Guy.

Same, I kinda want to read that era of JSA so I can see what happened.

Late reply, but yes, you absolutely can join the Justice League Book Club! I’d be glad to have you.