Dude, Superman: Man of Tomorrow is

and then some. It quickly became my favorite current Superman title when it launched in April (and in Superman Giant v2 before that). Robert Venditti writes a solid Superman yarn.

I think I mentioned it to you before, but if not, wait until the Superman and Metallo throwdown in upcoming issues. No wheels are reinvented involving superhero and villain dynamics, but it’s just fun and really nice to look at, thanks to penciler Paul Pelletier.

I’m glad you’re enjoying MOT. Be sure to chime in as you read further issues.

You’ll want to tune-in in the coming weeks then, as Superman Blue’s JLA adventures will absolutely be covered here.

I can be hesitant sometimes when advocating for a story and will playdown my enthusiasm.
Me: “dude, check this story out it’s awesome!”
Response after reading: “meh, it’s okay. I wouldn’t go as far as to say it’s awesome”

This guys taste sucks!
Me:

yeah that’s fair I just thought it was not bad, but perhaps I was a tad hyperbolic.

Any who, have a few pages left on TB&TB, I love the fun lightheartedness of the silver age stories. Probably will get a response post up this weekend and dive into JLA.

I’m glad you’re digging TB&TB, and I can’t wait to read your thoughts on JLA.

Look!! I did it!! I was able to scrounge the time to read these issues!!

I feel so accomplished!

Now to answer the Discussion Questions:

Is this your first time reading the debut of the JLA in The Brave and The Bold #28?

What are your thoughts on how Grant Morrison brought together a new League for a new era?

I really enjoyed it and liked how the story introduced you to the characters without being too expositive. I especially liked the callback to GL’s old weakness to things the color yellow from the The Brave and The Bold issue.

What was your favorite moment from this week’s material?

I’m glad you scrounged up the time to read these killer comics and tackle the Qs.

I’m also glad you enjoyed Morrison’s initial foray into JLA. The ride will get even better as we expand into his run over time.

“Thanks for stopping by!”

It was! I thought it was well done, it was cool seeing everyone together, even if the way they beat Starro is a little lame and Snapper Carr is…Snapper Carr.

It’s a really great first arc, one that really cements what I think the best JLA runs and stories tend to be, where all these characters face off against a threat none of them can face by themselves.

From Brave & The Bold, a detail of it I really liked was how at first we see Superman breaking up asteroids falling to Earth, and you assume that this is just them explaining why Superman won’t play a big role in this story. But then they bring that point back by having Martian Manhunter – or in this story, John Jones, the Manhunter from Mars – use those broken down asteroids against Starro. I just didn’t expect a little call to continuity like that from this era of comics.

From JLA, call me biased, but Batman’s figuring out first what the Hyperclan was and them finding one of their own beat up with a note on him John McClane style was pretty dope.

Good 'ol Snapper Carr. He may be a dork at times, but I love him. Hourman is one of my favorite titles to feature him.

I agree that Kyle’s manga line is iconic. It was ahead of it’s time in the late '90s and now fits the modern comic milieu perfectly. Grant Morrison knows how to do it.

Thanks for chiming in.

Goodness, I read this on time but forgot to join in here

Morrison does write a rad Aquaman. I’m now pondering what an ongoing Aquaman by him would be like. Probably as surreal and fantastic as his work on The Green Lantern, but underwater. As Lex said in Superman Returns, “Possibilities. Endless possibilities.”

BTW, I officially declare you the Aquaman of the JLBC.

Vroom points to the sign on the door that says shoes required as he bids farewell. I looks down at my bare feet covered in sand…ahh… this is a shoobies joint. Next time, promise. Walks out wearing my crown and trident in hand as I leave a trail of sand.

You (and anyone else) can comment whenever you like, mon ami. The threads are here (as Bane said in TDKR) “for you!”.

For you, the people!

I’ve thought of that seen so many times while following the campaigns this year!

I’ve conversed with fellow nerds as Bane. I need a Sucret afterward, but it’s worth it.

The first time I read Brave & the Bold #28 was February 1992 with the Silver Age Classics reprint. A few weeks later I splurged for the first volume of the Justice League Archives.

I will be eternally grateful to Grant Morrison for returning JLA to greatness. He restored the idea that the JLA is a gathering of the elite of the DCU. While the JLI was a highlight of the previous dozen years, all the others just did not work out. He’s on my JLA Writing Mt. Rushmore with Gardner Fox, Steve Englehart and Mark Waid. I also loved the use of the White Martians as it was a callback to my favorite JLA story of them all Justice League of America #144.

Favorite moment is from B&B #28 when Barry goes all Morrison Batman on everyone.
You two, fight the giant starfish!
Green Lantern use your ring to find out why Snapper’s immune to Starro’s ray!
Aquaman, get me a Shasta!

For someone who got into superheroes because of the 1973 Super Friends cartoon the use of science there was just the cherry on top.

For someone who got into superheroes because of the 1973 Super Friends cartoon the use of science there was just the cherry on top.

I will forever be grateful for Morrisons work with superman. I can’t pick a favorite superman story it’s to hard but All-Star shares the #1 spot with a few others.

Great User name by the way

Is this your first time reading the debut of the JLA in The Brave and The Bold #28?

Not the first time reading The Brave and The Bold, although first reading through JLA, and what a story that was.

What are your thoughts on how Grant Morrison brought together a new League for a new era?

I’d say very well done as there is a lot going on with each character from one book to the next in this story arc.

Set up nicely with the heroes being one-upped until all was revealed for how the League could battle back and save the day in the conclusion.

What was your favorite moment from this week’s material?

I’d have to go with these moments.

This from The Brave and the Bold since I’m certain The Flash TV show starting from 2014 did something similar to this in an episode at one point.

And from the JLA… I’d say this. 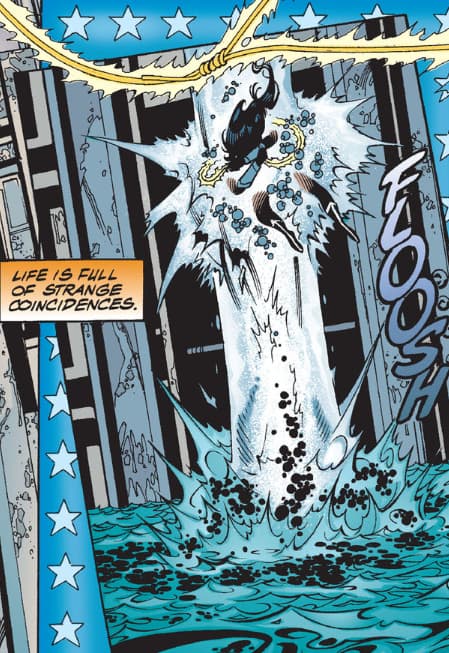 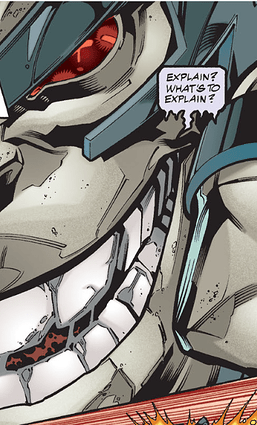 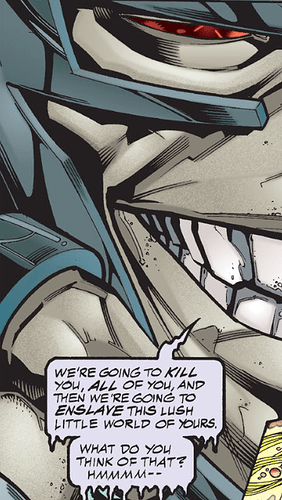 Although this is a strong contender as well. 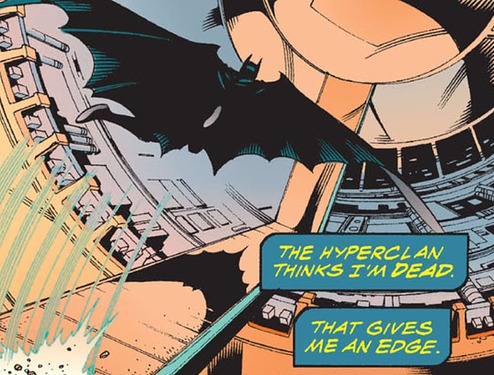 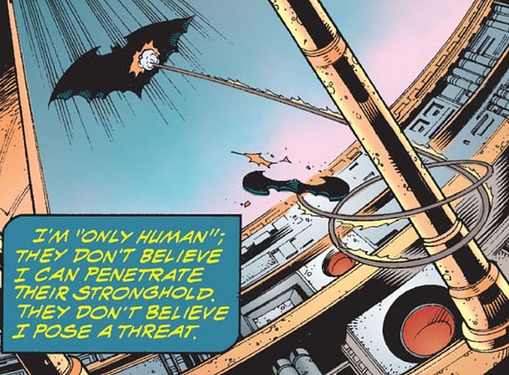 And… Always nice seeing the League together and how they all work to help when needed. 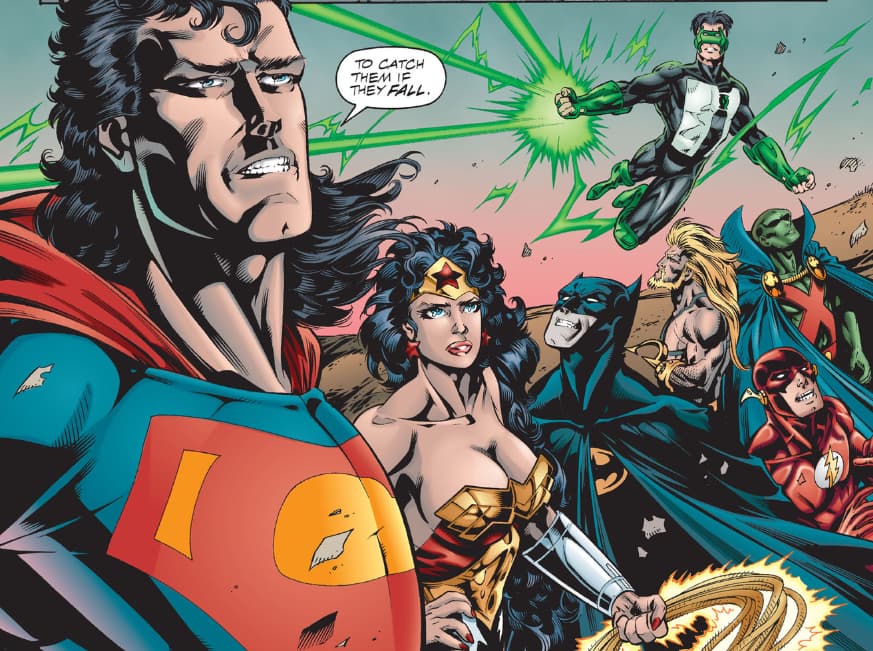 Loving your points and your art selections. Good, good stuff, as always.

SN: Apologies for the late reply. Blame it on Snapper.

SN: Apologies for the late reply. Blame it on Snapper.

Dude would get a lot more accomplished if he wasn’t always snapping his digits, 24/7/365.