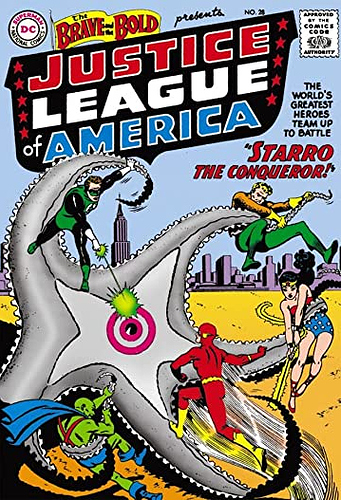 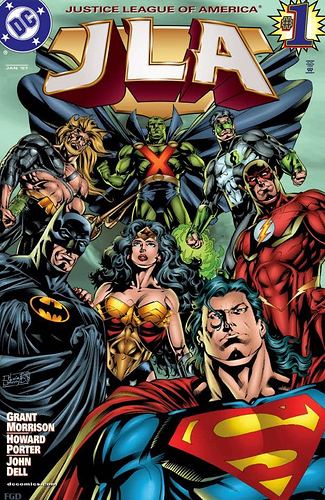 Welcome to Week 1 of the Justice League Book Club!

To kick things off, we’ll be looking at where the Justice League began in 1960 in the pages of The Brave and The Bold, to where they wound up well over three decades later in the beginning of JLA, one of the most heralded Justice League ongoing titles EVER.

This discussion will run from today, October 5th, until Thursday, October 15th. That’s right, TEN DAYS! Our normal discussions will go for one week and start on Thursdays, but in honor of this being Week 1, I wanted to start on a Monday and give anyone interested an ample amount of time to read and take in the wonderful adventures before you.

That’s the mission, League. Start reading and have FUN!

Have a seat and dive into some fun reads!

Will do, thank you good sir!

The honor’s all on this side of the table, good sir.

This will be my first time reading this run of JLA but I’ve certainly read TB&TB along will silver age JLA. It’s been a bit since I’ve read this but if memory serves me right I was bummed that the whole team didn’t fight him at once and Supes & Bats are not really apart of the story. There’s a issue with my account right now and can’t use the comic reader at the moment

but I think it starts with me then some drive by talk with bats and the story is really about MM/flash/MM&WW.

You’ve not read JLA, the greatest Justice League ongoing ever? Strap yourself in, partner! It’s awesome!

Just not Morrison’s run
But seat belt is on stand by.

Make sure it’s a high quality belt. You’ll need it as we gradually go through his run.

Silver Age Facts: Silver Age was the height of editor power at DC Comics. From Julius Schwartz’s Man of Two Worlds: My Life in Science Fiction and Comics. Justice League of America debuted in October 1960 with Flash, Green Lantern, Wonder Woman, Martian Manhunter and Aquaman “with Batman and Superman scheduled to join the lineup at a later day…but then I ran into a slight problem of office politics. Jack Schiff, who was then Batman editor and Mort Weisinger who was then the Superman editor, fel…

I have read the first Justice League story before, but it has been a very long time. I have not read the other run before, so this was new to me. I enjoyed the story, although I don’t like Superman’s hair. It was interesting to have the villains be Martians.

Glad you enjoyed Morrison’s debut on JLA. Have you read anything else of his run on the series, or is the whole thing brand new to you?

Speaking of the White Martians, check out the first three episodes of Justice League, Season 1. They’re the catalyst for why that League comes together.

I havent read any of his JLA. I read his Animal Man years ago and enjoyed it.

I love everything of Morrison’s that I’ve read, regardless of publisher (his New X-Men is still an all-time favorite X-run of mine), but JLA’s at the top of the list for me.

Animal Man is one of his few credits that I’ve not read in full. Still, what I have read is pretty sweet.

There was not even
An attempt to use Aquaman.

JLA by Morrison was action packed

And yet it eas fresh
Wally and Kyle were new

Clark Bruce and Jonn were the three leaders

Bats was the most dangerous

Glad to see you, man.

I agree that JLA was a great run. Granted, I’m enormously biased, but which other ongoing of the last 24 years since JLA launched can boast of writers like Grant Morrison, Mark Waid, Joe Kelly, Kurt Busiek, Geoff Johns and others?

In JLA #1, its funny to see where Morrison takes digs at lesser-known characters, be they in-panel or not. Someone will say “What happened to so and so?” with the typical response being “I don’t know, they lost their powers or something.”

Another great aspect of the first arc of JLA is Howard Porter’s art. When I hear his name, my mind instantly flashes to this series. He made a name for himself on this book, one that will hopefully continue to stand the test of time.

Oops, didn’t realize this had started… I’ll get started on reading these right away.

No worries, friend. You’ve until the 15th. Read and enjoy.

SN: I don’t impose a “lock” on reading. Anyone can read whatever, whenever and comment whenever. I’m flexible.

@Vroom, have you read those 2 digital superman comics that are on here? Man of tomorrow I think. I thought they were pretty solid. I could nitpick a thing or to about the ending with the gambler in #2 but overall I felt like I was walking into a familiar place with characters acting and sounding like I imagine they would in those situations.